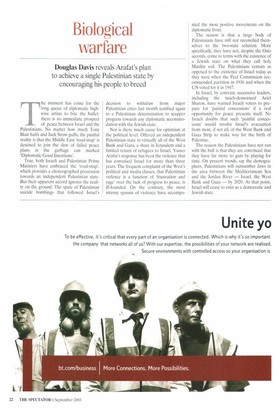 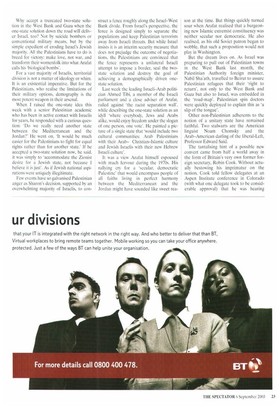 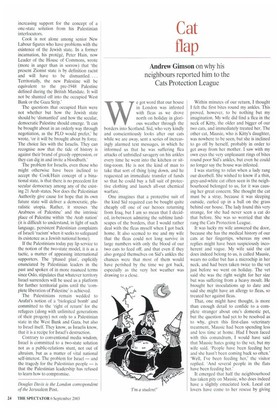 The moment has come for the long queue of diplomatic highwire artists to bite the bullet: there is no immediate prospect of peace between Israel and the Palestinians. No matter how much Tony Blair huffs and Jack Straw puffs, the painful reality is that the Middle East 'road-map' is destined to join the slew of failed peace plans in the garbage can marked 'Diplomatic Good Intentions'.

True, both Israeli and Palestinian Prime Ministers have embraced the 'road-map', which provides a choreographed procession towards an independent Palestinian state. But their apparent accord ignores the reality on the ground. The spate of Palestinian suicide bombings that followed Israel's decision to withdraw from major Palestinian cities last month testified again to a Palestinian determination to scupper progress towards any diplomatic accommodation with the Jewish state.

Nor is there much cause for optimism at the political level. Offered an independent Palestinian state in virtually all of the West Bank and Gaza, a share in Jerusalem and a limited return of refugees to Israel, Yasser Arafat's response has been the violence that has convulsed Israel for more than three years. The frequent complaint of the West's political and media classes, that Palestinian violence is a function of 'frustration and rage' over the lack of progress to peace, is ill-founded. On the contrary, the most intense spasms of violence have accompa

nied the most positive movements on the diplomatic front.

The reason is that a large body of Palestinians have still not reconciled themselves to the two-state solution. More specifically, they have not, despite the Oslo accords, come to terms with the existence of a Jewish state on what they call holy Muslim soil. The Palestinians remain as opposed to the existence of Israel today as they were when the Peel Commission recommended partition in 1936 and when the UN voted for it in 1947.

In Israel, by contrast, successive leaders, including the much-demonised Aridl Sharon, have warned Israeli voters to prepare for 'painful concessions' if a real opportunity for peace presents itself, No Israeli doubts that such 'painful concessions' would involve Israel's evacuation from most, if not all, of the West Bank and Gaza Strip to make way for the birth of Palestine.

The reason the Palestinians have not run with the ball is that they are convinced that they have far more to gain by playing for time, On present trends, say the demographers. Palestinians will outnumber Jews in the area between the Mediterranean Sea and the Jordan River — Israel, the West Bank and Gaza — by 2020. At that point, Israel will cease to exist as a democratic and Jewish state. Why accept a truncated two-state solution in the West Bank and Gaza when the one-state solution down the road will deliver Israel, too? Not by suicide bombers or conventional military means, but by the simple expedient of eroding Israel's Jewish majority. All the Palestinians have to do is breed for victory: make love, not war, and transform their womenfolk into what Arafat calls his 'biological bombs'.

For a vast majority of Israelis, territorial division is not a matter of ideology or whim. It is an existential imperative. But for the Palestinians. who realise the limitations of their military options, demography is the most potent weapon in their arsenal.

When I raised the one-state idea this week with a senior Palestinian academic who has been in active contact with Israelis for years, he responded with a curious question: 'Do we really need another state between the Mediterranean and the Jordan?' He went on, 'It would be much easier for the Palestinians to fight for equal rights rather than for another state.' If he accepted a two-state solution now, he said, it was simply to 'accommodate the Zionist desire for a Jewish state, not because I believe it is just'. As if Jewish national aspirations were uniquely illegitimate.

Few events have so galvanised Palestinian anger as Sharon's decision, supported by an overwhelming majority of Israelis, to con

struct a fence roughly along the Israel—West Bank divide. From Israel's perspective, the fence is designed simply to separate the populations and keep Palestinian terrorists away from Israeli throats. But while Israel insists it is an interim security measure that does not prejudge the outcome of negotiations, the Palestinians are convinced that the fence represents a unilateral Israeli attempt to impose a border, seal the twostate solution and destroy the goal of achieving a demographically driven onestate solution.

Last week the leading Israeli—Arab politician Ahmed Tibi, a member of the Israeli parliament and a close adviser of Arafat, railed against 'the racist separation wall', while describing the one-state solution as an idyll 'where everybody, Jews and Arabs alike, would enjoy freedom under the slogan of one person, one vote'. He painted a picture of a single state that 'would include two cultural communities: Arab Palestinians with their Arab— Christian—Islamic culture and Jewish Israelis with their new Hebrew Israeli culture'.

It was a view Arafat himself espoused with much fervour during the 1970s. His rallying cry for a 'secular, democratic Palestine' that would encompass people of all faiths living in perfect harmony between the Mediterranean and the Jordan might have sounded like sweet rea

son at the time. But things quickly turned sour when Arafat realised that a burgeoning new Islamic extremist constituency was neither secular nor democratic. He also realised, as his old Soviet patron began to wobble, that such a proposition would not play in Washington.

But the dream lives on. As Israel was preparing to pull out of Palestinian towns in the West Bank last month, the Palestinian Authority foreign minister, Nabil Sha'ath, travelled to Beirut to assure Palestinian refugees that their 'right to return', not only to the West Bank and Gaza but also to Israel, was embedded in the 'road-map'. Palestinian spin doctors were quickly deployed to explain this as 'a slip of the tongue'.

Other non-Palestinian adherents to the notion of a unitary state have remained faithful. Two stalwarts are the American linguist Noam Chomsky and the Arab—American darling of the liberal-Left, Professor Edward Said.

The tantalising hint of a possible new convert came from half a world away in the form of Britain's very own former foreign secretary, Robin Cook. Without actually bestowing his imprimatur on the notion, Cook told fellow delegates at an Aspen Institute conference in Colorado (with what one delegate took to be considerable approval) that he was hearing increasing support for the concept of a one-state solution from his Palestinian interlocutors.

Cook is not alone among senior New Labour figures who have problems with the existence of the Jewish state. In a former incarnation, his protégé, Peter HaM, now Leader of the House of Commons, wrote (more in anger than in sorrow) that 'the present Zionist state is by definition racist and will have to be dismantled. . Territorially, the new Palestine will be equivalent to the pre-1948 Palestine defined during the British Mandate. It will not be shunted off into the occupied West Bank or the Gaza Strip.'

The questions that occupied HaM were not whether but how the Jewish state should be 'dismantled' and how the secular, democratic Palestine should emerge. 'It can be brought about in an orderly way through negotiation, as the PLO would prefer,' he wrote, 'or it will be brought about by force. The choice lies with the Israelis. They can recognise now that the tide of history is against their brand of greedy oppression, or they can dig in and invite a bloodbath.'

The problem for Israelis, even those who might otherwise have been inclined to accept the Cook/Hain concept of a binational state, is that there is no precedent for secular democracy among any of the existing 21 Arab states. Nor does the Palestinian Authority give cause for hope that its own future state will deliver a democratic, pluralistic utopia. Rather, it stresses 'the Arabness of Palestine' and the intrinsic place of Palestine within 'the Arab nation' (it is difficult to understand, in light of such language, persistent Palestinian complaints of Israeli 'racism' when it seeks to safeguard its existence as a Jewish national home).

Tithe Palestinians today pay lip service to the notion of the two-state model, it is as a tactic, a matter of appeasing international supporters. The 'phased plan', explicitly enunciated by Palestinian leaders in the past and spoken of in more nuanced terms since Oslo, stipulates that whatever territory Israel surrenders will be used as a platform for further territorial gains until the 'complete liberation of Palestine' is achieved.

The Palestinians remain wedded to Arafat's notion of a 'biological bomb' and committed to the 'right of return' for the refugees (along with unlimited generations of their progeny) not only to a Palestinian state in the West Bank and Gaza, but also to Israel itself. They know, as Israelis know, that it is a recipe for Israel's destruction.

Contrary to conventional media wisdom, Israel is committed to a two-state solution not as a public-relations stunt, not out of altruism, but as a matter of vital national self-interest. The problem for Israel — and the tragedy for the Palestinian people — is that the Palestinian leadership has refused to learn how to compromise.

Douglas Davis is the London correspondent of the Jerusalem Post.