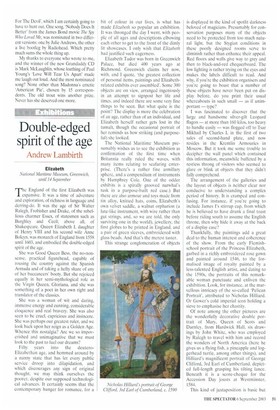 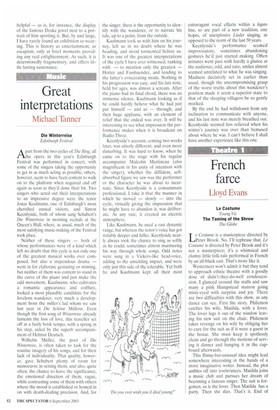 Double-edged spirit of the age

The England of the first Elizabeth was expansive. It was a time of adventure and exploration, of richness in language and derring-do. It was the age of Sir Walter Ralegh, Frobisher and Drake, of the rebellious charmer Essex, of statesmen such as Burghley and Cecil; above all, of Shakespeare. Queen Elizabeth I, daughter of Henry VIII and his second wife Anne Boleyn, was monarch of England from 1558 until 1603, and embodied the double-edged spirit of the age.

She was Good Queen Bess, the no-nonsense, practical figurehead, capable of rousing the country against the Spanish Armada and of taking a hefty share of any of her buccaneers' booty. But she rejoiced equally in her semi-mythological role as the Virgin Queen, Gloriana, and she was something of a poet in her own right and translator of the classics.

She was a woman of wit and daring, immense energy and cunning, considerable eloquence and real bravery. She was also seen to be cruel, capricious and insincere. She was perhaps our greatest ruler, and we look back upon her reign as a Golden Age. Whence this nostalgia? Are we so impoverished and unimaginative that we must look to the past to fuel our dreams?

Fifty years into the deuteroElizabethan age, and hemmed around by a nanny state that has let every public service droop into dilapidation, and which discourages any sign of original thought, we may think ourselves the poorer, despite our supposed technological advances. It certainly seems that the contemporary hunger for romance, for a

bit of colour in our lives, is what has made Elizabeth so popular an exhibition. It was thronged the day I went, with people of all ages and descriptions elbowing each other to get to the front of the dimly lit showcases. I only wish that Elizabeth had justified such eagerness.

Elizabeth Tudor was born in Greenwich Palace, but died 400 years ago at Richmond. Greenwich claims her now, with, and I quote, 'the greatest collection of personal items, paintings and Elizabethrelated exhibits ever assembled'. Some 300 objects are on view, arranged ingeniously in an attempt to signpost her life and times, and indeed there are some very fine things to be seen. But what quite is the point? The display is more the celebration of an age, rather than of an individual, and Elizabeth herself rather gets lost in the tumult, though the occasional portrait of her reminds us how striking (and purposeful) she looked.

The National Maritime Museum presumably wishes us to see the exhibition as confirmation of the first time when Britannia really ruled the waves, with many items relating to seafaring enterprise. (There's a rather fine armillary sphere, and a compendium of instruments by Humphrey Cole. One of the odder exhibits is a spirally grooved narwhal's tusk in a purpose-built red case.) But there are also armour and toys made from tin alloy, knitted hats, coins, Elizabeth's own velvet saddle, a walnut orpharion (a lute-like instrument, with wire rather than gut strings, and, so we are told, the only surviving one in the world), jewellery, the first globes to be printed in England, and a pair of green sleeves, embroidered with glass beads. And that's the merest taster.

This strange conglomeration of objects is displayed in the kind of spotlit darkness beloved of magicians. Presumably for conservation purposes many of the objects need to be protected from too much natural light, but the Stygian conditions in these poorly designed rooms serve to diminish rather than enhance their appeal. Red floors and walls give way to grey and then to black-and-red chequerboard. The low lighting is rather trying on the eyes and makes the labels difficult to read. And why, if you're the exhibition organisers and you're going to boast that a number of these objects have never been put on display before, do you print their usual whereabouts in such small — as if unimportant — type?

I was fascinated to discover that the large and handsome silver-gilt Leopard flagon — at more than 160 kilos, too heavy to handle easily — was flogged off to Tsar Mikhail by Charles I, in the first of two sales of second-hand plate, and now resides in the Kremlin Armouries in Moscow. But it took me some trouble to decipher the wall panel which contained this information, meanwhile buffeted by a restless throng of visitors who seemed to glare or blink at objects that they didn't fully comprehend.

The arrangement of the galleries and the layout of objects is neither clear nor conducive to understanding a complex period of history. It is cramped and confusing. For instance, if you're going to include James I's stirrup cup, from which he is believed to have drunk a final toast before riding south to assume the English throne, then why hide it away at the back of a display case?

Thankfully, the paintings add a great deal to the human interest and coherence of the show. From the early Flemishschool portrait of the Princess Elizabeth, garbed in a richly embroidered rose gown and painted around 1546, to the formalised image of royalty painted by a less-talented English artist, and dating to the 1590s, the portraits of this remarkable woman punctuate and enliven the exhibition. Look, for instance, at the marvellous intricacy of the so-called Pelican Portrait', attributed to Nicholas Hilliard. Or Gower's cold imperial icon holding a sieve to emphasise her chastity.

Of note among the other pictures are the wonderfully decorative double portrait of Mary, Queen of Scots and Darnley, from Hardwick Hall, six drawings by John White, who was employed by Ralcgh to travel with him and record the wonders of North America (here he gives us a flying fish, a pineapple and loggerhead turtle, among other things), and Hilliard's magnificent portrait of George Clifford, 3rd Earl of Cumberland, depicted full-length grasping his tilting lance. Beneath it is a score-cheque for the Accession Day jousts at Westminster. 1584.

This kind of juxtaposition is basic but helpful — as is, for instance, the display of the famous Drake jewel next to a portrait of him sporting it. But, by and large, I have rarely found an exhibition so wearing. This is history as entertainment, as escapism, only at brief moments providing any real enlightenment. As such, it is determinedly fragmentary, and offers little lasting sustenance.