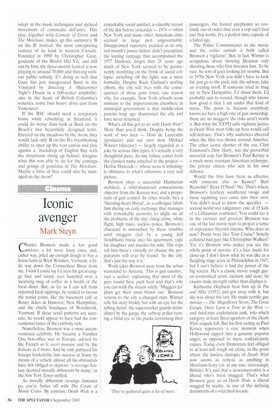 Cniartes Bronson made a few good ovies, a lot more lousy ones, and, either way, piled up enough dough to buy a horse farm in West Windsor, Vermont, a little way down the Connecticut River from me. I wish I could say I'd seen his great craggy face and weary eyes hunched over a steaming mug of coffee in a booth of the local diner. But, as far as I can tell from reported local sightings, he tended to favour the tonier joints, like the basement café at Rosey Jekes in Hanover, New Hampshire, and the chichi boutiques of Woodstock, Vermont. If these retail patterns are accurate, he would appear to have had the conventional tastes of the celebrity rich.

Nonetheless. Bronson was a most unconventional celebrity. He became a Number One box-office star in Europe, adored by the French as le sacre monstre and by the Italians as il bruto. And he only parlayed his foreign bankability into success at home by means of a vehicle almost all his obituarists have felt obliged to deplore: 'a revenge fantasy deemed morally abhorrent by many,' as the New York Times sniffed.

As morally abhorrent revenge fantasies go, you're better off with The Count of Monte Cristo. By contrast, Death Wish is a remarkable social artefact, a valuable record of the day before yesterday — 1974 — when New York and many other American cities seemed in large part ungovernable. Disappointed reporters, puzzled as to why last month's power failure didn't precipitate the looting rampage that accompanied the 1977 blackout, forget that 25 years ago much of New York seemed to be permanently trembling on the brink of social collapse: switching off the lights was a mere formality. Despite Rudy Giuliani's sterling efforts, the city still lives with the consequences of those grim times: one reason why, for example, New York schools seem immune to the improvements elsewhere in municipal government is that middle-class parents long ago abandoned the city and have never returned.

What's all this got to do with Death Wish? More than you'd think. Despite being the work of two men — Dino de Laurentiis (producer) and our own dear Michael Winner (director) — largely regarded as a joke by serious film types, it's actually a very thoughtful piece. Its one failure comes from the classiest name attached to the project — Herbie Hancock — whose score is irritatingly obtrusive in what's otherwise a very real picture.

Bronson plays a successful Manhattan architect, a mild-mannered conscientious objector from the Korean war, and a proponent of gun control. In other words, he's a 'bleeding-heart liberal', as a colleague labels him during an early exchange that manages with remarkable economy to alight on all the problems of the day: rising crime, white flight, high taxes, useless police. Bronson's character is untouched by these troubles until muggers (led by a young Jeff Goldblum) break into his apartment, rape his daughter and murder his wife. The cops tell him there's virtually no chance the perpetrators will ever be found: 'In the city, that's just the way it is.'

Work takes Bronson away from the urban wasteland to Arizona. This is gun country,' says a realtor, explaining that most of the guys round here pack heat and that's why you can walk the streets safely. 'Muggers jes' plain get their asses blown out.' Bronson returns to the city a changed man. Winner tells his story briskly but with an eye for the telling detail: the supermarket guards intimidated by the gangs, the subway police turning a blind eye to the punks terrorising their passengers, the busted payphones so routinely out of order that even a cop can't find one that works. It's a perfect time capsule of a failed age.

The Police Commissioner in the movie and the critics outside it both called Bronson a 'vigilante'. But, in fact, Winner is scrupulous about showing Bronson only shooting those who first threaten him. To be sure, he sort of goes looking for trouble. But in 1970s New York you didn't have to look far: just go to the park, ride the subway, take an evening stroll. If someone tried to mug me in New Hampshire, I'd shoot them. I'd probably aim to wound, though who knows how good a shot I am under that kind of stress. The point is, because everybody knows we have a high rate of gun ownership, there are no muggers: the risks aren't worth it. But what the NYPD calls vigilante justice in Death Wish most folks up here would call self-defence. That's why audiences cheered when the film was shown around America. The other iconic shooter of the era, Clint Eastwood's Dirty Harry, was the proverbial maverick cop, but Bronson's Paul Kersey is a much more resonant American archetype, the private citizen who acts in his own defence, Would the film have been as effective with someone else as Kersey? Burt Reynolds? Ryan O'Neal? No. That's where Bronson's leathery weathered visage and those squinting eyes came into their own. You didn't need to know the specifics — second world war tailgunner, one of 15 kids of a Lithuanian coalminer. You could see it in the crevices and grooves: Bronson was one of the last movie stars to project a sense of experience beyond cinema. Who does so now? Pretty boys like Tom Cruise? Strictly celluloid bad guys like Christopher Walken? Yet it's Bronson who makes you see the whole point of movies: it's a face made for close-up. I don't know what he was like as a fledgling stage actor in Philadelphia in 1947. but I can't believe it had the power of the big screen. He's a classic movie tough guy: an economical actor, taciturn and stoic; he exudes male strength rather than displays it.

Katharine Hepburn beat him up in Pat and Mike (1952) and got away with it, but she was about the last. He made terrific guy movies — The Magnificent Seven, The Great Escape, Once Upon a Time in the West — and third-rate exploitation junk, into which category at least three-quarters of the Death Wish sequels fall. But his first outing as Paul Kersey represents a rare moment when Hollywood tapped into a genuine populist anger, as opposed to mere cocktail-party causes. Today even Democrats feel obliged to at least talk tough on crime, to the point where the lawless dystopia of Death Wish now seems as remote as anything in Merchant-Ivory (or, at any rate, increasingly British). It's said that a neoconservative is a liberal who's been mugged. That's what Bronson gave us in Death Wish: a liberal mugged by reality, in one of the defining documents of a wretched decade.