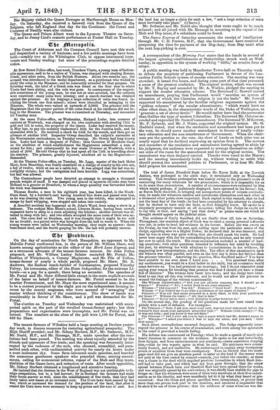 The Court of Aldermen and the Common Council have met this week and despatched a variety of business; and a few public meetings have been held—notably two at the Whittington Club, to oppose intermural inter- ments and Sunday trading: but none of the proceedings require detailed notice.

At Bow Street Police-office, last week, Timoleon Vlasto, a young man of fashion- able appearance, said to be a native of Vienna, was charged with stealing Roman, Greek, and other coins, from the British Museum. About two months ago, the accused was introduced to the medal department, as a gentleman who wished to study the coins in the Museum; and he constantly attended for that purpose. On Saturday week, the label of a Greek coin was found on the floor near to where Vlasto had been sitting, and the coin was gone. In consequence of the respect- able connexions of the young man, he was not at once arrested, but the cabinets were examined: many coins were missing; and a search-warrant was obtained against the prisoner. At his lodgings a large collection of coins was found, in- cluding the Greek one first missed ; others were identified as belonging to the Museum. The whole were valued at upwards of 2,0001. The prisoner told the Magistrate that the greater portion of the coins found at his residence did not be- long to the Museum. The prisoner was reexamined on Thursday, and remanded till Tuesday next.

At the same Police-office, on Wednesday, Richard Loder, late overseer of convicts at Woolwich, was charged on his own confession with stealing 7351. in gold and 151. in notes, the property of the Queen. Loder had received the money, in May last, to pay the monthly tradesmen's bills for the Justitia hulk, and he absconded with it. He received a check for 6501. for the month, and then got an advance of another 1001. Inspector Otway described the culprit's surrender at the Westminster stationhonse, on Tuesday evening. Mr. Otway had long known him. Loder had been a Sergeant of Police; then Governor of Horsham Gaol; on the abolition of which establishment the Magistrates subscribed a sum of money for him ; and subsequently he was made Overseer at Woolwich, with a salary of 2001. He told Otway that he had spent all the 7501. in travelling about the, country. The prisoner, greatly dejected, admitted all to the Magistrate.— Remanded.

At the Thames Police-office, on Tuesday, Mr. Legg, master of the bark Helen Mary, from Mauritius, was finally examined on a charge of crueltyro his own son, a boy of twelve, while at sea as a cabin-boy. It was alleged that the lad was in- corrigibly vicious; but the castigation bad been horrible. Legg was committed, but bail was allowed.

The Customhouse people have detected an attempt to smuggle a thousand pounds weight of snuff. It was damped and placed in layers in oil-cake sent from Holland to a grazier at Stratford; to whom a large quantity was forwarded before the trick was discovered.

Thomas Bunks, a man in his eightieth year, has been killed, in the Black- friars Road, by a butcher's cart having knocked him down and passed over him, as he was crossing the road. Two young men in the vehicle, who attempted to escape by hard whipping, were stopped and taken into custody.

A dreadful accident has happened at St. John's Wood, from using a stove in a bedroom. The cookiat Miss Mann's school, Liburna House, having been unwell, requested leave to sleep in a room adjoining the kitchen; another servant was di- rected to sleep with her; and two others occupied the same room of their own ac- cord. The room had no fireplace, and it was thought that it might be too cold for an invalid; so a patent stove was brought from the ball to warm it. When the young women were called on Wednesday morning, they made no answer: three were found dead, and the fourth gasping for life: the last will probably recover.