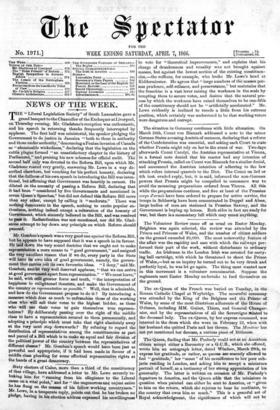 The Queen, finding that Mr. Peabody could not as an

American citizen accept either a Baronetcy or a G.C.B., which she offered, wrote him an autograph letter, dated Windsor, March 28th, to express her gratitude, or rather, as queens are scarcely allowed to feel "gratitude," her "sense" of his munificence to her poor sub- jects residing in London, and asking him to accept a miniature portrait of herself, as a testimony of her strong appreciation of his generosity. The letter is written on occasion of Mr. Peabody's departure to America, and the Queen adds that the miniature in question when painted can either be sent to America, or "given to him on the return, which she rejoices to hear he meditates, to the country that owes him so much." This is a graceful act of Royal acknowledgment, the significance of which will not be

limited to Mr. Peabody. It identifies the Queen with the very poorest of her subfeets, ea way to give rest pleasure. tor mow mean and wretched Londoners who will never have a dance of being presented to tfer Majesty fn pertos.