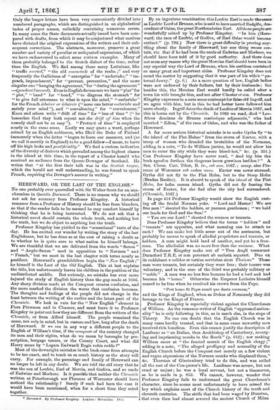 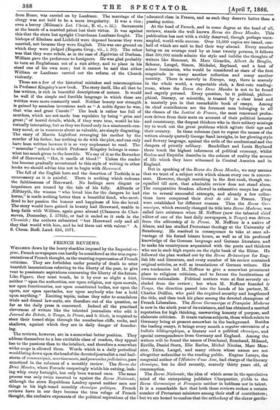 HEREWARD, OR TIIE' LAST OF THE ENGLISH.* No one probably

ever quarrelled with Sir Walter Scott for an ana- chronism in Quentin Durward. There is no reason why we should not ask for accuracy from Professor Kingsley. A historical -romance from a Professor of History should be free from blunders, so that if the reader fails to be amused he may comfort himcelf by thinking that he is being instructed. We do not ask that a historical novel should contain the whole truth, and nothing but the truth, but we do object to anything but the truth.

Professor Kingsley has yielded to the "sensational" taste of the day. He has excited. our wonder by writing the story of the last Englishman, but he has done so at the cost of raising a doubt as to whether he is quite sure to what nation he himself belongs. We are thankful that we are delivered from the words " Saxon " and " Anglo-Saxon " used in opposition to " Norman " and 4‘ French," but we meet in the last chapter with terms nearly as pestilent. Hereward's grandchildren begin. the "New English ;" be himself is the Last of the Old English. This at last explains the title, but unfortunately leaves his children in the position of the undistributed middle. But seriously, no mistake has ever more injured the study of English history than the gap made at 1066. Any sharp division made at the Conquest creates confusion, and the more marked the division the worse that confusion becomes. The thoughts and feelings of the people did not change in the feast between the writing of the earlier and the latest part of the Chronicle. We look in vain for the "New English "element in Piers Plowman and in Chaucer, and must leave it to Professor Kingsley- to pointout how-they are different from the writers of the Chronicle, or from Alfred himself. The people remained the same, not only in mind, but in custom and-la.w, longafter the death

Hereward. If wo are in any way a different people to the 'English of William's time, if the oonquost of the country changed its men and their rights, what do we mean by boroughs by pre- scription, burgage tenure, or the County Court, and what did Henry mean by "Lagam Eadwardi Regis vobis reddo ?"

Most of the downright mistakes in the book come from attempts to be too exact, and to teach us as much history as the story will c arry. For example, the parentage and family of Hereward can no longer be left in any-doubt. We are told the old story that he was the son of Leofric, Earl of Mercia, and Godiva, and' so uncle of Eadvrine and Morkere. Is it possible that neither the Chronicle 'written at Peterborough nor Florence of Worcester should have noticed the relationship ? Surely if such had been the case it would have been mentioned, when for a short time they acted together.

* Elercicard. By Professor Kingsley. London: Macmalan. 1$63. BY an ingenious- combination thisteofric Earl is- made.thesame as Eeofric-Lordof rtinnne,-who is said to have married'Eaclgif u,. des- ceuclantot Galan; the-great Northumbrian Earl. Allthese people are wonderfully mixed- up- by Professor Kingsley: "In him, (Here- ward) the race of Beofric; of Gocliva, of Earl (Mac would become extinct" (p. 784-.) Now there: is- greatdifficultyin proving any- thing- shout the family of Hbreward; but one' thing seems cer- thin; viz that if he-bac/been the uncle-of Eadwine anctMorkere, we should' have been told of it by good authority. And- there does not aeenranyreason why the-greatMercian Earlahould have been in any especial way the' Lord of Pirunne; when his earldom- contained so mrmygre-at and important cities: Professor Kingsley does, not ,mend the matter by suggesting that it was part of his wife's. " pa, ternal dowry." (p. 6.) As a mere question of law, English ladies were not endowed. by their fathers, but by their husbands.; but besides this, the Mercian Earl would hardly be called after a town his- wife brought him, and-not after Chester et'sini. Professor Kingsley expressewin anote some eontemptfor false old Ing4 and, we agree with him; but in this he- had better have followed: him- more closely.. Ingulf datestlie death of LeofricorMercia,1057, and this is borne out by the Chronicle. In 1062 we read, died" Leo- , fricus − de. Brunne mariscique adjacentis," who had :married " Ediva,"'of the race of Oslao, and who was the father of

the island of the Flat Holme from the storm of Exeter, with a 'troop of women- who dreaded the brutalities of the Normans, adding in a note, "To do William justice, he would not allow his men to enter the city while they were blood-hot," &c. (pi 361.) Can Professor Kingsley have never read, "And Mg him ties burh ageafon forthan tha thegenas heour geswicon hrefdon ? " A Sax. Chron. Cott. Tiber, B. iv., sub ann. 1067-.;' comp. also-Flo- rence of Worcester sub eodem anno. Exeter was never stormed. 1Gytha did not fly to the Flat Holm, but to the Steep Holm (Braden Reolice)'. It is absurd to speak of the island of the- Flat. !./To/m, for holm means island. Gytha did not fly fearing the 'storm of Exeter; for she fled after the city had surrendered- (Chronicle, 1067.).

In page 414 Professor Kingsley would show the English cast- ing off the feudal Norman yoke. "Lord and Master ! We are free men !" shouted the holders, or yeoman gentlemen.; "we hold our lands for God and the Sun!"

"You are our Lord ! " shouted the socmen or tenants.

Does Professor Kingsley believe that the terms " holders " and ," tenants " are opposites, and what meaning can he attach to 'each? We can make but little sense out of the sentences; but probably he means to speak of allodial proprietors and tenants, or holders. A man might hold land of another, and yet be a free- man. The allodialist was no more free than the socman. What does Professor Kingsley make out of "Tres Angli tenuermt Darneford T.R.E. et non poterant ab ecclesil separari. Duo ex us reddebant v solidos et tertius serviebat sicut Thainus." These men were tenants, but certainly they were free ; their tenure was voluntary, and in the case of the third was probably military or "noble." A man was no less free because he had a lord and had become his " homo." Otherwise. the Emperor Lothaire himself ceased to be free when he received his crown- from the Pope.

"Post homo fit Papa sumit quo diinte coronam," and the Kings of England, when as Dukes of Normandy they did homage to the Kings of France.

Professor Kingsley is especially violent against the Churchmen of William. As the romance-writer of English "oppressed nation- ality" he is only following in this, as in much else, in the steps of Thierry. No one can doubt that the English Church was in many cases hardly treated, and that in some cases unworthy men received rich benefices. Even this cannot justify the description of Lanfranc as "an Italian, then Archbishop of Canterbury, scourg- ing and imprisoning monks in the South "(p. 642) ; nor making William sneer at "the fancied morals of the English clergy ;" adding in a note, "The alleged_ profligacy and sensuality of the English Church before the Conquest rest merely on, a few violent and vague e'xpreasions of the Norman monks who displaced them," &c. Thurston of Glastonbury tried to do this, and was exiled all the red of the Conqueror's life. Lanfranc was severe, but not cruel or unjust; he was a loyal servant, but not a timeserver, as he is made in p. 853. We cannot, however, wonder that Professor Kingsley fails to understand the great Churchman's character, since he seems most unfortunately to have mimed the key which explains most of the Church history of the tenth and eleventh centuries. The strife that had been waged by Dunstan, that even then had almost severed the ancient Church of Milan from Rome, was carried on by Lanfranc. The marriage of the clergy was not held to be a mere irregularity. It was a vice ; even a heresy (Milman's Lat. Christ., B. vi., c. iii.). Sacraments at the hands of a married priest lost their virtue. It was against this that the stern but upright Churchman Lanfranc fought. The bishops of Elmham and Lichfield were deposed because they were married, not because they were English. This was one ground on which they were judged (Regesta Greg., vii., i. 30). The other was that they were rebels, as in the case of lEgelwine of Durham. William gave the preference to foreigners. He was glad probably to turn an Englishman out of a rich abbey, and to place in his stead one of his own men ; but it cannot be said that either William or Lanfranc carried out the reform of the Church violently.

These are a few of the historical mistakes and misconceptions in Professor Kingsley's new book. The story itself, like all that he has written, is rich in beautiful descriptions of nature. It would be well if the simple and forcible language in which these are written were more constantly used. Neither beauty nor strength is gained by senseless inversions such as "A noble figure he was, that wise and great Canute !" The book is rather too full of murders, which are not made leas repulsive by being "grim and great ;" of horrid details, which, if they were true, would be his- torically interesting, but as they are found only in a nineteenth-cen- tury novel, or in romances about as valuable, are simply disgusting. The story of Martin Lightfoot revenging his mother by the murder of his father, has nothing to do with the plot, and can only have been written because it is so very unpleasant to read. The " muscular " school to which Professor Kingsley belongs is some- what too much given to the horrible. We say of it as the Berserker did of Hereward, " Hoi, it smells of blood !" Unless the reader has become gradually accustomed to this style of writing in other books we should advise him not to begin with Hereward.

The fall of the English hero and the desertion of Torfrida is as unnecessary as it is painful. There is nothing which redeems the faithlessness of Hereward. No feelings save disgust or impatience are roused by the tale of his folly. Alfturda or /Elfthryth, the woman "who loved him for the dangers he had borne," is made nothing better than a beautiful fiend, who sacri- ficed to her passion the honour and happiness of him she loved. The story would have gained in beauty had Hereward, unable to keep faith with William, again gone abroad (Clamores de Chet- steven, Domesday, L 376th), or had it ended as it ends in the Chronicle; the outlaws submitted "but Hereward only and all they that would with him, and he led them out with valour." A. S. Chron. Bodl. Laud. 636, 1071.