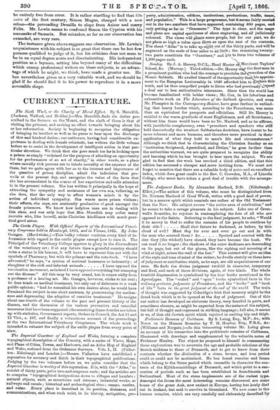 Page 22, 7 April 1866 — The Cattle Plague.. With Official Reports of the International Veteri-
Close

The Cattle Plague.. With Official Reports of the International Veteri-

nary Congresses held in Huniburyh, 1863, and in Vienna,18G5. By John Gamgee. (Bardwioke.)—This balky volume contains every kind of in- formation with regard to the cattle plague except how to cure it. The Principal of the Veterinary College appears to glory in the discomfiture of the veterinary art ; if at any future time a grateful country should raise a statue in his 'honour, it will have to represent him not with the symbols of Pharmacy, but with the poleaxe and the rate-book. "I have advocated," he says, "a system of national insurance or indemnity ; of

slaughter of the-sick and infected 'animals I have opposed the vaccination movement, as indeed I have opposed everything but stamping out the disease." All this may be very sound, but it comes oddly from a professor of a healing art. Mr. Gurnee% however, sticks to his text ; he does touch on medical treatment, but only out of deference to a weak public opinion ; "had he consulted his own desires alone, he would have dismissed the subject in one short sentence, by pronouncing the useless- ness And deprecating the adoption of curative treatment." He assigns about one-fourth of the volume to the past and present history of the disease, and the discussion of the various preventive and remedial measures that have been suggested ; the remaining three-fourths are taken up with statistics, Government reports, Orders in Council, the Act 11 and 12 Viet., c. 107, and finally a voluminous account of the proceedings at the two International Veterinary Congresses. The whole work is intended.to exhaust the subject of the cattle plague from every point of , view.