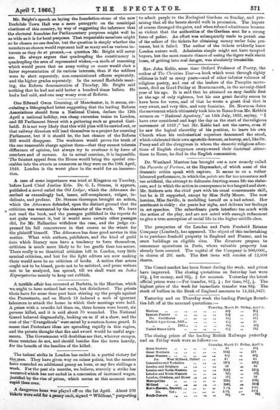 Dr. Westland Marston has brought out a new comedy called

the Favorite of Fortune, at the Haymarket, of which some of the dramatic critics speak with rapture. It seems to us a rather laboured performance, in which the points are far too numerous and too artificial, the attempt to delineate drawing-room life too elabo- rate, and in which the action in consequence is too languid and slow. Mr. Sothern acts the chief port with his usual consummate skill, but he is fll supported, except by Miss Nelly Moore. The new heroine, Miss Saville, is modelling herself on a bad school. Her sentiment is sickly : she paints her sighs, and delivers her feelings in set speeches. The subordinate parts interfere too much with the action of the play, and are not acted with enough refinement to give a true conception of social life in the higher middle class.