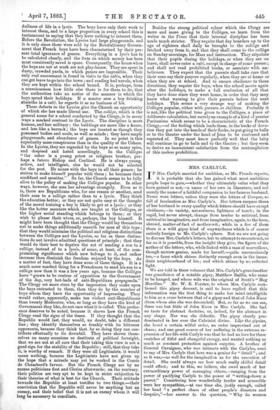 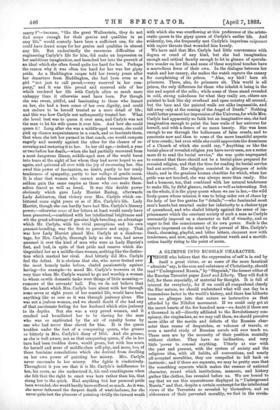 IF Mrs. Carlyle married for ambition, as Mr. Froude reports,. it is probable that she has gained what most ambitious people hope to gain,—whether they ultimately value what they have gained or not,—a name of her own in literature, and not merely the name of a faithful companion to her famous husband. Never were letters, unless they were the letters of Cowper, so full of fascination as Mrs. Carlyle's. Her letters surpass those of her husband in every quality which letters should have except vividness,—in variety, naturalness, lightness of touch; in the rapid, but never abrupt, change from tender to satirical, from satirical to imaginative, and from imaginative, again, to the keen,_ shrewd, matter-of-fact of mother-wit; while in a few of them there is a wild gipsy kind of waywardness which is of course- entirely foreign to Mr. Carlyle's sphere. But we are not going to discuss Mrs. Carlyle's letters, but to attempt to reconstruct, so far as it is possible, from the insight they give, the figure of the author of the letters, who, while linked with a man of marvellous, though narrow genius, made for herself,—quite unconsciously too,—a fame which shines distinctly enough even in the imme- diate neighbourhood of his ; and which shines by no reflected. light.

We are told in these volumes that Mrs. Carlyle's grandmother was grandniece of a notable gipsy, Matthew Baillie, who came to be hanged, and whose wife was the original of Scott's " Meg Merrilies." Mr. W. E. Forster, to whom Mrs. Carlyle men- tioned this gipsy descent, is said to have replied that this information was the first thing to make her mind intelligible to him as a cross between that of a gipsy and that of John Knox (from whom also she was descended). But, so far as we can see, there was but little of John Knox in Mrs. Carlyle. She had no taste for abstract doctrine, or, indeed, for the abstract in any shape. Nor was she didactic. The gipsy clearly pre- dominated in her over the Calvinist divine. Like the gipsies,. she loved a certain wilful order, an order improvised out of chaos; and one great source of her suffering in the extreme re- pression of her life with Carlyle was that he had no love for these snatches of fitful and changeful energy, and wanted nothing so much as constant protection against surprise. A brother of General Cavaignac, who was intimate with the Carlyles, used to say of Mrs. Carlyle that hers was a genius for " detail " ; and so it was,—as well for the imagination as for the execution of

detail. She could always see how much really skilful detail could effect; and to this, we believe, she owed much of her extraordinary power of managing others,—ranging from the power of pacifying Carlyle to the power of " writing-down a parrot." Considering how wonderfully tender and accessible were her sympathies,—at one time she, justly enough, called her head " a perfect chaos of other people's disasters and despairs,"—her answer to the question, " Why do women marry ?"—because, "like the great Wallenstein, they do not find scope enough for their genius and qualities in an easy life," would scarcely have been a sufficient one, for she could have found scope for her genius and qualities in almost any life. But undoubtedly the enormous difficulties of engineering Carlyle's life for him, did make an impression on her ambitions imagination, and launched her into the pursuit of an ideal which she often found quite too hard for her. Perhaps the reason why it was often too hard for her was her gipsy pride. As a Haddington cooper told her twenty years after her departure from Haddington, she had been even as a girl "not just to call proud,—very reserved in her com- pany," and it was this proud and reserved side of her which rendered her life with Carlyle often so much more unhappy than it otherwise need have been. For though she was sweet, pitiful, and fascinating to those who leaned on her, she had a keen sense of her own dignity, and could not endure to be herself treated as a mere detail of life; and this was how Carlyle not unfrequently treated her. What she loved best was to queen it over men, and Carlyle was not the man to let his wife queen it over him. And how she could queen it Long after she was a middle-aged woman, she could pick up chance acquaintances in a coach, and so fascinate them, that when she left her parasol in that coach, one would compete eagerly and secretly against the other for the chance of re- covering and restoring it to her. In her old age,—indeed, a year or two before her death,—when she had partially recovered from a most dangerous illness, middle-aged men of the world burst into tears at the sight of her whom they had never hoped to see again, and quivered all over with the joy of recovering her. She owed this power of fascination, no doubt, partly to her ready tenderness of sympathy, partly to her volleys of gentle scorn. It is clear that women who cannot make themselves feared, seldom gain the same empire as those who can make them- selves feared as well as loved. It was this double power obviously which gave Lady Harriet Baring, afterwards Lady Ashburton, that victory over Mrs. Carlyle which em- bittered some eight years or so of Mrs. Carlyle's life. Lady Harriet, though she can hardly have had Mrs. Carlyle's literary power,—otherwise some of her letters at least would surely have been preserved,—combined with her intellectual brightness and wit the great advantage of genuine high-breeding, an advantage which Mr. Carlyle, with his vivid perceptions and his own peasant-breeding, was the first to perceive and enjoy. That was how Lady Harriet placed Mrs. Carlyle at a disadvan- tage, for Mrs. Carlyle, thorough lady as she was, had never queened it over the kind of men who were at Lady Harriet's feet, and had, in spite of that pride and reserve which dis- tinguished her as a middle-class woman, nothing like the distinc- tion which marked her rival. And bitterly did Mrs. Carlyle feel the defeat. It is obvious that she, who never fretted over the most homely tasks before, chafed passionately against having—for example—to mend Mr. Carlyle's trowsers at the very time when Mr. Carlyle wanted to go and worship a woman to whom servile domestic tasks were things of little meaning,— rumours of the servants' hall. For, we do not believe that the sore heart which Mrs. Carlyle bore about with her through some seven or eight years of her married life, would have been anything like as sore as it was through jealousy alone. She was not a jealous woman, and we should doubt if she had any of that passionate feeling for her husband which stirs jealousy to its depths. But she was a very proud woman, and it crushed and humiliated her to be slaving for the man who was so captivated by the air of royalty borne by one who had never thus slaved for him. It is the queen trodden under the foot of a conquering queen, who groans so bitterly in Mrs. Carlyle's diary of 1855. And she groans, as she is well aware, not as that conquering queen, if she in her turn had been trodden down, would groan, but with less scorn for herself and more of middle-class self-pity, and more, too, of those feminine consolations which she derived from dwelling on her own power of painting her misery. Mrs. Carlyle never succumbs to her misery. She fights it vindictively. Throughout it you see that it is Mr. Carlyle's indifference to her, his scorn, as she understood it, his cool exactingness when she felt that the right to exact was hers rather than his, that stung her to the quick. Had anything but her personal pride been wounded, she would hardly have suffered so much. As it was, she never fathomed the deepest depth of wretchedness, for she never quite lost the pleasure of painting vividly the inward wrath with which she was overflowing at this preference of the aristo- cratic queen to the gipsy queen of Carlyle's earlier life. And evidently, too, she frequently met Carlyle's imperious etigeanee with rapier thrusts that wounded him keenly.

We have said that Mrs. Carlyle had little conversance with dogma or creed of any kind, but she had imagination enough and critical faculty enough to let in gleams of specula- tive wonder on her life, and some of these sceptical touches have a marvellous force of their own. In the dialogue between her watch and her canary, she makes the watch reprove the canary for complaining of its prison. " Alas, my bird ! here sit prisoners. There, also, do prisoners sit. This world is all prison, the only difference for those who inhabit it being in the size and aspect of the cells ; while some of these stand revealed in cold, strong nakedness for what they really are, others are painted to look like sky overhead and open country all around, but the bare and the painted walls are alike impassable, and fall away only at the coming of the Angel of Death." Nothing could better present her impression of the Universe, for while Mrs. Carlyle had apparently no faith but an imaginative one, she had imagination enough to paint the bare walls of her universe for herself, and with a fresco of no mean beauty. She was keen enough to see through the hollowness of false creeds, and to penetrate now and then to some of the more beautiful aspects of true creeds ; but even while she could appreciate the dreariness of a Church of which she could say, " Anything so like the burial-place of revealed religion you have never seen, nor a rector more fit to read the burial service," she was quite unprepared to contend that there should not be a burial-place prepared for revealed religion, and that the time for reading its burial service had not arrived. Her religion consisted in glimpses of noble ideals, and in the gracious human charities for which, when her pride was not touched, she was always more than ready. She had a humour, too, that combined with her natural tenderness to make life, by fitful gleams, radiant as well as interesting. But on the whole, it is the gipsy queen whom we see in her,—the wild lively queen whose mission it was to bring order out of chaos by the help of her fine genius for " details,"—who fascinated most men's hearts but smarted under her inferiority to a choicer type of queenhood, and who chafed bitterly against the sense of im- prisonment which the constant society of such a man as Carlyle necessarily imposed on a character so full of vivacity, and so eager to feel the consciousness of its own power. Such is the picture impressed on the mind by the perusal of Mrs. Carlyle's frank, charming, playful, and bitter letters, eloquent now with tenderness, and now, again, with impatient wrath and a mortifi- cation hardly rising to the point of scorn.