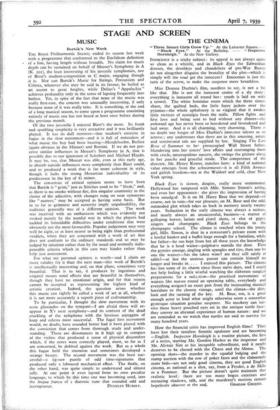 " Three Smart Girls Grow Up." At the Leicester Square.— " Black Eyes." At the Berkeley. — " Inspector Hornleigh." At the New Gallery.

INNOCENCE is a tricky subject : its appeal is not always quite so dean as a whistle, and in Black Eyes the Edwardian dresses, the droshkys and chandeliers of pre-War Russia do not altogether disguise the brutality of the plot—which is simply will the roue get the innocent? Innocence is just the turn of the screw, to make the suspense more breathless.

Miss Deanna Durbin's film, needless to say, is not a bit like that. She is not the innocent centre of a sly story : everything is innocent all round her : youth is laid on with a trowel. The white feminine room which the three sisters share, the quilted beds, the little furry jackets over the pyjamas—the whole upholstery is so virginal that it awakes little twitters of nostalgia from the stalls. Pillow fights and first love and being sent to bed without any dinner—the awkward age has never been so laundered and lavendered and laid away. And it is all charming, very charming. There is no doubt any longer of Miss Durbin's immense talents as an actress ; any undertones that there are in this amusing, astute and sentimental tale are supplied by her. Singing The Last Rose of Summer to her preoccupied Wall Street father, blundering into her sisters' love affairs and rearranging them with crude, unscrupulous success, she swings the picture along in her gauche and graceful stride. The competence of the director, Mr. Henry Koster, matches hers : a kind of national

value emerges from the schwiirmerei—it is all Fifth Avenue and girlish freedom—tea at the Waldorf and cold, clear New York spring.

Black Eyes is slower, dingier, really more sentimental. Hollywood has tampered with Mlle. Simone Simon's acting, and even her appearance : she gives the impression of having been smudged. It is on M. Harry Baur that we depend—of course, not in vain—for our pleasure, on M. Baur and the odd, outmoded plot which takes us back in memory nearly twenty years. Seduction in the early cinema was always a serious, and nearly always an unsuccessful, business—a matter of galloping horses, lariats and pistol shots, or else of gypsy singers and champagne. Black Eyes belongs to the champagne school. The climax is reached when the young girl, Mlle. Simon, is shut in a restaurant's private room with a lustful banker and a buffet large enough for a battalion, while her father—he nas kept from her all these years the knowledge that he is a head waiter—palpitates outside the door. First the gypsies emerge, jingling with spangles and tins, then one by one the waiters—has she taken wine? are they still safely at table?—at last the anxious parent can contain himself no longer and breaks in. . I enjoyed this picture. The cinema has lost some of its charm since those naive days, and I could not help feeling a little wistful watching the elaborate surgical preparations for a seduction—the practised movements of waiters like nurses round an operating table, everybody and everything assigned an exact part from the insinuating musical harridans to the chosen vintage, until the climax—the dirty look and the turning of the key. M. Baur, too, is a great enough actor to lend what might otherwise seem a somewhat grotesque .situation genuine suspense. No mockery can sur- vive those heavy pouched eyes set in the antique turtle face: they convey an abysmal experience of human nature : and we are reminded as we watch that turtles are said to survive for many hundred years.

How the financial crisis has improved English films! They have lost their tasteless Semitic opulence and are becoming —English. Inspector Hornleigh is a routine picture, the ,first of a series, starring -Mr. Gordon Harker as the inspector and Mr. Alistair Sim as his incapable subordinate, and it nearly deserves to be classed with the Chans and the Motos. The opening shots—the murder in the squalid lodging and the stamp auction with the row of poker faces and the elaborately mute bids—are not only good cinema, they are good English cinema, as national as a shot, say, from a Feyder, a de Mille or a Pommer. But the picture doesn't quite maintain that realistic level : there are too many bogus exteriors and menacing shadows, talk, and the murderer's motives remain