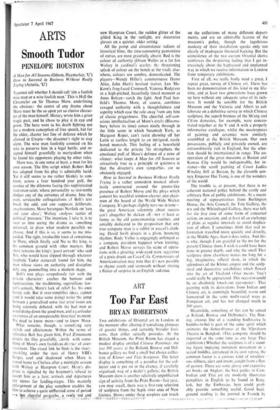 A Man for All Seasons (Odeon, Haymarket, `U') How to Succeed in Business Without Really Trying (Astoria, 'LP) 'I cannot tell whether I should call 'aim a foolish wise man or a wise foolish man.' This is Hall the Chronicler on Sir Thomas More, underlining the obvious: the centre of any drama about More must be the so open yet so elusive charac- ter of the man himself. History wrote him a great tragic part, and he chose to play it in cap and gown. The hero went to his death fighting not for a madern conception of free speech, but for the older, chaSter last line of defence which he allowed in Utopia—the dissenter's right to stay silent. The wise man foolishly counted on his wits to preserve him in a legal battle; and re- signed himself gracefully to martyrdom when he found his opponents playing by other rules.

More was, in one sense at least, a man for his own season. The film script which Robert Bolt has adapted from his play is admirably lucid. Yet it still seems to me rather blankly to con- front, across a four hundred year gulf, the essence of the dilemma facing this sophisticated statesman-saint, whose personality so insistently dodges any of the extremes of drama. Into the even, serviceable colloquialisms cf Bolt's text break the odd, and one supposes deliberate, anachronisms. More harangues Norfolk on 'you and your class'; Wolsey Analyses tactics of political 'pressure.' The intention, I take it, is to steer us into seeing the drama as something universal, to draw what modern parallels we choose. And if this is so, it seems to me mis- guided. The tight, irreducible knot of conscience in More, which finally said No to the king, is his common ground with other martyrs. But there remains the king's 'good servant' who said Yes, who would have slipped through whatever loophole Tudor statecraft found for him, the man whose views on authority and discipline defy any pummelling into a modern shape.

Bolt's text plays scrupulously fair with the private character: catches the humour and equivocation, the maddening, supercilious law- yer's conceit, More's lack of relish foe his own heroic role. But it over-simplifies ideas, cannot (and it would take some doing) make the jump between a generalised sense that great issues are being solemnly debated, with the bad men as usual doing down the good man, and a particular awareness of an unrepeatable historical moment. We need to know more—and to know More.

What remains, though, is something very stylish and affectionate. Within the terms of reference Bolt has given him, Fred Zinnemann directs the film gracefully, alertly with some- thing of More's own fastidious distrus, of over- statement. The visual link he finds is the river: sparkling under the oars of Henry VIII's barges, cool and shadowed when More is rowed home to Chelsea after a midnight session with Wolsey at Hampton Court. More's dis- grace is signalled by the boatmen's refusal to accept him as a fare; arrivals and departures are scenes for landing-stages. This masterly enlargement of the play somehow enables the film to achieve a quite unflurried sense of period

—a chggrful gargoyles, a rawly red and new Hampton Court, the sudden glitter of the gilded King in the sunlight, are decorative glosses on a quieter, older setting.

All the pomp and circumstance tedium of historical films, the time-consuming pantomime of extras, are most gratefully absent. Red is the colour of authority (Orson Welles as a fat fox Wolsey in cardinal's scarlet; the threatening splash of colour on the bench at the trial); else- where, colours are sombre, domesticated. The players—Wendy Hiller's commonsense Dame Alice, John Hurt's hesitant traitor, Leo Mc- Kern's frog-faced Cromwell, Vanessa Redgrave in a high-pitched, beautifully timed moment as Anne Boleyn—catch the light. And Paul Sco- field's Thomas More, of course, combines ravaged authority with a thoughtfulness and asperity which ease the role away from any hint of classic priggishness. The cheerful, self-con- scious intellectualism of More's circle (Blooms- bury before its time) comes nicely through in the little scene in which Susannah York, as Margaret Roper, can't resist showing off her Latin at tactless length to an intrigued, easily bored monarch. This feeling of a household dedicated to the private !ife strengthens the emotional pull of More's defence of a zone of

silence: what keeps A Man for All Seasons so attractively true to a principle of quietness is that the director's own sympathies are so obviously engaged.

How to Succeed in Business Without Really Trying is a rather unmodern musical, effort-

lessly constructed around the gnome-like presence of Robert Morse and the ploys which convert his watchful window-cleaner into chair- man of the board of the Wcrld Wide Wicket Company. It's perhaps slightly nervous in tone— the great American solemnity about success can't altogether be shaken off—but It least as funny as the old gamesmanship routines, and amiably dedicated to the proposition that any true company man is a rabbit in weasel's cloth- ing. David Swift directs in a plain, bouncing rhythm; Rudy Vallee is engagingly unhinged as a company president happiest when knitting; and Robert Morse surveys his scene of opera- tions with a gloating, wide-eyed stare imgrestive of a pixie drunk on Coca-Cola. Connoisseurs of Americanisation may note that it's now possible to rhyme youth and vermouth without stirring a flicker of surprise in an English sudience.