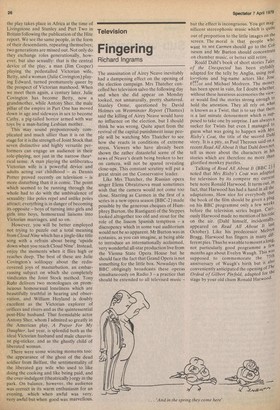 the play takes place in Africa at the time of Livingstone and Stanley and Part Two in Britain following the publication of the Hite report. We see the same people, in the form of their descendants, repeating themselves; two generations are missed out. Not only do they exchange roles generationally, however, but also sexually: that is the central device of the play, a man (Jim Cooper) playing the pedestalled Victorian wife, Betty, and a woman (Julie Covington) playing Edward, turned prematurely queer by the prospect of Victorian manhood. When we meet them again, a century later, Julie Covington has become Betty, now a grandmother, while Antony Sher, the male pillar of the empire in Part One has moved down in age and sideways in sex to become Cathy, a pig-tailed horror armed with war toys by a man-hating Lesbian mother.

This may sound preposterously complicated and much sillier than it is on the stage for it is the strength of Joint Stock that seven distinctive and highly versatile performers can engage an audience in their role-playing, not just in the narrow theat rical sense. A man playing the unliberateu Victorian wife is a powerful device and adults acting out childhood — as Dennis Potter proved recently on television — is more disturbing than it is comic. The point which seemed to be running through the whole had to do with the ambivalence of sexuality: like poles repel and unlike poles attract; everything is in danger of becoming its opposite — boys of turning into girls and girls into boys, homosexual liaisons into Victorian marriages, and so on.

However, you will be better employed not trying to puzzle out a total meaning from Cloud Nine which has a jingle-like title song with a refrain about being 'upside down when you reach Cloud Nine'. Instead, enjoy the moments when it flies high or reaches deep. The best of these are Julie Covington's soliloquy about the redis covered joys of masturbation, an embar rassing subject on which she completely vindicates the Joint Stock method. Tony Rohr delivers two monologues on prom iscuous homosexual loneliness which are beautifully truthful in hearing and obser vation, and William Hoyland is doubly excellent as the Victorian explorer of orifices and rivers and as the quintessential post-Hite husband. That formidable actor Antony Sher, whom I admired so greatly in the American play, A Prayer For My Daughter, last year, is splendid both as the ideal Victorian husband and male chauvinist pig-sticker, and as the ghastly child of liberated woman.

There were some wincing moments too: the appearance of the ghost of the dead soldier from Belfast, the sentimentality of the liberated gay wife who used to like doing the cooking and like being paid, and the over-indulgent (theatrically) orgy in the park. On balance, however, the audience was correct in its warm enthusiasm for an evening, which when awful was very, very awful but when good was marvellous. The assasination of Airey Neave inevitably had a dampening effect on the opening of the election campaign. Mrs Thatcher cancelled her television salvo the following day and when she did appear on Monday looked, not unnaturally, pretty shattered. Stanley Orme, questioned by David Holmes on Westminster Report (Thames) said the killing of Airey Neave would have no influence on the election, but I should think he was wrong. Quite apart from the revival of the capital punishment issue people will be watching Mrs Thatcher to see how she reacts in conditions of extreme stress. Viewers who have already been shown the rather distasteful scene of the news of Neave's death being broken to her on camera, will not be spared revealing close-ups. This constant scrutiny will put a great strain on the Conservative leader.

Like Mrs Thatcher, the Russian opera singer Elena Obratztsova must sometimes wish that the camera would not come too close. Starring as Carmen in the first of a series in a new opera season (BBC-2) made possible by the generous cheques of Humphrey Burton, the Rustiguzzi of the Steppes looked altogether too old and stout for the role of the lissom Spanish temptress — a discrepency which in some vast auditorium would not be so apparent. Mr Burton was in ecstasies, as you can imagine, at being able to introduce an internationally acclaimed, very wonderful all-star production live from the Vienna State Opera House but he should face the fact that Grand Opera is not something for the little box. Nowadays the BBC obligingly broadcasts these operas simultaneously on Radio 3 — a practice that should be extended to all televised music — but the effect is incongruous. You get magnificent stereophonic music which is quite out of proportion to the little images on the screen. The moral is that people who want to see Carmen should go to the Co" iseum and Mr Burton should concentrate on chamber music, or better still retire. Roald Dahl's book of short stories Tales of the Unexpected has been stylishlY adapted for the telly by Anglia, using real locations and big-name actors like Jose For and Michael Modrern. The money has been spent in vain, for I doubt whether without these luxurious accessories the viewer would find the stories strong enough to hold the attention. They all rely on what is known as a Twist, that is to say that there is a last minute denouement which is supposed to take one by surprise. I am always a sucker for Twists but even I managed to guess what was going to happen with Mrs Rixby's Coat, the title of the second Dahl story. It is a pity, as Paul Theroux said on a recent Read All About It that Dahl does not tell us more about the characters in his stories which are therefore no more than glorified monkey puzzles. Talking of Read All About It (BBC 2) I noted that Mrs Rixby's Coat was adapted for television by its compere my current bete noire Ronald Harwood. It turns out, in fact, that Harwood has had a hand in all the adaptations. How nice for everybody that the book of the film should be given a Plug on his BBC programme only a few weeks before the television series began. Curiously Harwood made no mention of his role on the air. (Dahl himself, incidentally. appeared on Read All About It last October). Like his predecessor Melvyn Bragg, Harwood has fingers in many chf" ferent pies. Thus he was able to mount a long' not particularly good programme a few months ago about Evelyn Waugh. This was supposed to commemorate the 75th anniversary of Waugh's birth but it also conveniently anticipated the opening of The Ordeal of Gilbert Pin fold, adapted for the stage by your old chum Ronald Harwood.