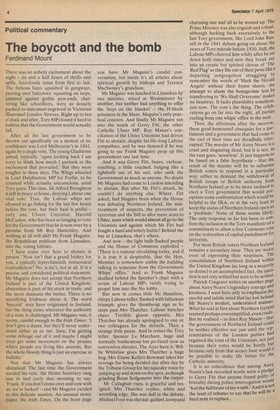 The boycott and the bomb

There was an unholy excitement about the night — six and a half hours of thrills and spills, ferociously tense from first to last. The famous faces squashed in gangways, peering over balconies, squatting on steps, jammed against gothic pew-ends, chattering like schoolboys, were as densely packed as statesmen engraved in Victorian Illustrated London Newses. Right up to ten o'clock and after, Tory MPs found it hard to believe that the Government would actually fall.

After all the last government to be thrown out specifically on a motion of no confidence was Lord Melbourne's in 1841, again by a single vote. The young Gladstone jotted, typically, 'upon looking back I am sorry to think how much I partook in the excitement that prevailed.' But they were tougher in those days. The Whigs wheeled in Lord Halyburton. MP for Forfar, to be counted while actually unconscious, amid Tory jeers. This time, Sir Alfred Broughton is left in peace at home, denying Labour one vital vote. True, the Labour whips are allowed to go fishing for the last few hours before the vote, but their haul is pitiful — only one Ulster Unionist, Harold McCusker, who has been so longing to vote for the Government that he is won over by a promise from Mr Roy Hattersley. And nothing at all will shift Mr Frank Maguire, the Republican publican from Lisnaskea, into the voting lobbies.

'I have come over here to abstain in person.' Now isn't that a grand Irishry for you, a typically leprechaunish, nonsensical contradiction? No, is isn't, not at all. It is a precise and considered political statement. Mr Maguire does not accept that Northern Ireland is part of the United Kingdom; abstention is part of his stock in trade, and the more dramatic the better. There is no mystifying Irishness about it. The word 'boycott' may have originated in Ireland, but the thing exists wherever the authority of a state is challenged. Mr Maguire was, it seems, candid enough to the Irish Times: 'I don't give a damn, but they'll never understand either us or me. Sure. I'm getting some mileage out of it and maybe I might even get some movement on the prisons where people are living like animals. But the whole bloody thing is just an exercise in bullshit.'

Not that Mr Maguire has always abstained. The last time the Government needed his vote, the Home Secretary rang him in bed early that morning to say: 'Frank, if you don't come over and vote with us. we're fucked' — and Mr Maguire yielded to this delicate suasion. An unusual newspaper, the Irish Times. On the front page you have Mr Maguire's candid conversation, but inside it's all articles about spiritual growth by bishops and Terence MacSwiney's grandson.

Mr Maguire was lunched in Lisnaskea by one minister, wined at Westminster by another, but neither had anything to offer the 'boys on the blanket' — the H-block prisoners in the Maze, Maguire's only practical concern. And finally Mr Maguire ran into the wrath of Gerry Fitt, the other Catholic Ulster MP. Roy Mason's conciliation of the Ulster Unionists had driven Fitt to abstain, despite his life-long Labour sympathies, and he was damned if he was going to see Frank Maguire prop up this government one last time.

And it was Gerry Fitt, brave, verbose, touching, a little touched, bulging like a lightbulb out of his suit, who sank the Government as much as anyone. No doubt Mr Maguire had come to London intending to abstain. But after Mr Fitt's attack, he couldn't do anything else. Where. Fitt asked, had Maguire been when the House was debating Northern Ireland, the maltreatment of suspects, the prevention of terrorism and the Bill to allot more seats to Ulster, seats which would almost all go to the Unionists and against which Mr Fitt had fought a hard and lonely battle? Behind the bar at Lisnaskea, that's where.

And now — the light bulb flashed purple and the House of Commons exploded — 'There is a rumour circulating today, and if it is true it is despicable, that the Hon. Member is somewhere within the building talking to someone from the Government Whips' office.' And so Frank Maguire skulked behind the Speaker's chair with a scrum of Labour MPs vainly trying to propel him into the No lobby.

But now in comes little Mr Hamilton, chirpy Labour teller, flushed with fallacious triumph, gives the thumbs-up sign as he steps past Mrs Thatcher. Labour benches cheer. Terrible gloom opposite. Mrs Thatcher has already apologised to one or two colleagues for the debacle. Then a strange little pause. And in comes the Tory teller, Spencer Le Marchant, huge and normally bonhomous but po-faced now as convention dictates. The Ayes have it. Willie Whitelaw gives Mrs Thatcher a huge hug. Mrs Elaine Kellett-Bowman takes her revenge for being derided day after day by the Tribune Group for her squeaky voice by jumping up and down on the spot, as though grinding Brian Sedgemore into the carpet.

Mr Callaghan rises, is graceful and resigned. Mrs Thatcher replies, white and sounding edgy. She was dull in the debate. Michael Foot was the star, gallant, loony and charming one and all as he wound up. The Prime Minister was also roguish and robust, although harking back excessively to the last Tory government, like Lord John Russell in the 1841 debate going on about the years of Tory misrule before 1830. Still, the Labour MPs cheered him wildly after he sat down both times and now they break out into an erratic but spirited chorus of 'The Red Flag' as they file out of their pews like a departing congregation struggling to remember the words of 'Hark the Herald Angels' without their hymn sheets. An attempt to alarm the bourgeoisie less by transferring to 'We Shall Overcome' makes no headway. It lacks plausibility somehow. just now. The vote's the thing. The celebrations go on far into the night, all parties reeling from one whips' office to the next.

Then, the afternoon after the morrow, these good-humoured obsequies for a parliament and a government that had come to the end of their time are dreadfully interrupted. The murder of Mr Airey Neave is a cruel and disgusting deed, but it is not. as the cant goes, 'senseless'. It just happens to be based on a false hypothesis — that the result of the murder will be to influence British voters to respond in a particular way: either to demand the withdrawal of British troops or British authority from Northern Ireland or to be more inclined to elect a Tory government that would precipitate some confrontation which would be helpful to the IRA, or at the very least to keep the status of Northern Ireland open as a 'problem.' None of these seems likely. The only response so far has been to confirm the inclusion in the Tory manifesto of a commitment to allow a free Commons vote on the restoration of capital punishment for terrorists.

For most British voters Northern Ireland remains a secondary issue. They are weary even of expressing their weariness. The consolidation of Northern Ireland within the United Kingdom (so long as a majority so desire) is an accomplished fact. the question is not only settled but seen to be settled.

Patrick Cosgrave writes on another page about Airey Neave's legendary courage and kindness. I want here only to emphasise the careful and subtle mind that lay low behind Mr Neave's modest, understated manner. What he said at first about Northern Ireland seemed perhaps oversimplified, even crude. But he realised — as does Roy Mason — that the government of Northern Ireland could be neither effective nor just until the rer resentatives of the London parties had regained the trust of the Unionists, not just because their votes would be handy but because only from that secure base would it be possible to make life better for the Catholic minority. It is no coincidence that among Airey Neave's last recorded words were a pledge to Gerry Fitt that anyone found guilty uf brutality during police interrogation would 'feel the full brunt of my wrath.' And it is not the least of tributes to say that he will be a hard man to replace.