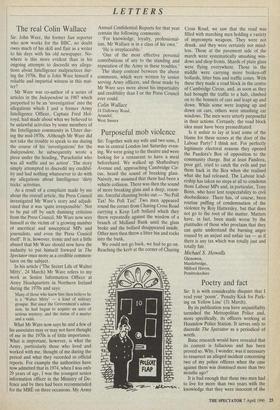 Sir: John Ware, the former Sun reporter who now works for the BBC, no doubt owes much of his skill and flair as a writer to his days with his old newspaper. No- where is this more evident than in his ongoing attempts to discredit my allega- tions about Intelligence malpractices dur- ing the 1970s. But is John Ware himself a reliable and impartial witness in this mat- ter?

Mr Ware was co-author of a series of articles in the Independent in 1987 which purported to be an 'investigation' into the allegations which I and a former Army Intelligence Officer, Captain Fred Hol- royd, had made about what we believed to be unlawful activities by some members of the Intelligence community in Ulster dur- ing the mid-1970s. Although Mr Ware did not take the trouble to speak to me during the course of his 'investigations' for the Independent, he subsequently wrote a piece under the heading, 'Parachutist who was all waffle and no action'. The story simply attempted to discredit my credibil- ity and had nothing whatsoever to do with my allegations about Intelligence 'dirty tricks' activities.

As a result of a complaint made by me about the overall article, the Press Council investigated Mr Ware's story and adjudi- cated that it was 'quite irresponsible'. Not to be put off by such damning criticism from the Press Council, Mr Ware now sees himself as the victim of 'a growing number of uncritical and unsceptical MPs and journalists, and even the Press Couticil itself. It is, however, ironic and not a little absurd that Mr Ware should now have the audacity to put himself forward in The Spectator once more as a credible commen- tator on the subject.

In his article (The Secret Life of Walter Mitty', 24 March) Mr Ware refers to my work as Senior Information Officer at Army Headquarters in Northern Ireland during the 1970s and says: Many of those who knew him then believe he is a 'Walter Mitty' — a kind of military groupie. But since the Government's admis- sion, he had begun to acquire an aura of serious mystery, and the status of a martyr and a saint.

What Mr Ware now says he and a few of his associates may or may not have thought of me in the 1970s is of little importance. What is important, however, is what the Army, particularly those who lived and worked with me, thought of me during the period and what they recorded in official reports. For example the authorities have now admitted that in 1974, when I was only 29 years of age, I was the youngest senior information officer in the Ministry of De- fence and by then had been recommended for the MBE on three occasions. My Army Annual Confidential Reports for that year contain the following comments: `For knowledge, loyalty, professional- ism, Mr Wallace is in a class of his own.' `He is irreplaceable.'

`One of the most effective personal contributions of any to the standing and reputation of the Army in these troubles.'

The sharp contrast between the above comments, which were written by senior serving Army officers, and those made by Mr Ware says more about his impartiality and credibility than I or the Press Council ever could.