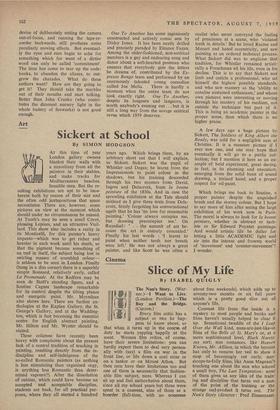 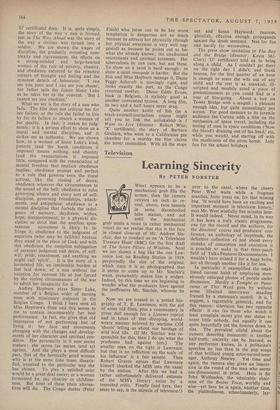 Slice of My Life

The Nun's Story. (War- !1._C ner.)—I Want to Live. a S (London Pavilion.)—The ° Boy and the Bridge. 8 (Curzon.) Every film critic has a .1 ill aS subject or two he hap- pens tO know about, so that when it turns up in the course of duty he starts yapping happily at the scent. Women film critics, of course, have their severe limitations: you can hardly expect them to deal very person- ally with (say) a .film on war in the front line, or life down a coal mine or on a tanker or on Mount Athos. But then men have their limitations too and one of them is necessarily that fashion- able film subject, nuns. Whereas I can Sit up and feel authoritative about them, since all my school years but three were spent in a convent, nine of them as a boarder (full-time, with no nonsense about free weekends), which adds up to seventy-two months or six full years which is a pretty good slice out of anyone's life.

Convent life from the inside is a mystery to most people and books and films haven't usually helped to clear it up. Sensational twaddle of the I Leap Over the Wall kind, nuns-are-just-like-us films of the Bells of St. Mary's or, at a more sophisticated level, Black Narcis- sus sort; nun romances, like Heaven Knows, Mr. Allison, in which the heroine has only to remove her veil to show a mop of becomingly cut curls; nun- stoops-to-folly films, like Anna Magnani's touching one about the nun who adored a small boy, The Last Temptation: none of them gives us any idea of the train- ing and discipline that turns out a nun, of the point of the training or the strange end-product it turns out. The Nun's Story (director: Fred Zinnemann; `I.J' certificate) does. It is, quite simply, the story of the way a nun is formed, just as The Way Ahead was the story of the way a civilian was turned into a soldier. We are shown the stages of discipline, the gradually mounting com- plexity and rigorousness; the effects on a strong-minded and large-hearted woman of the rule of poverty, chastity, and obedience enforced to the remotest corners of thought and feeling and the

minutest details of behaviour. 'I can see you poor and I can see you chaste', her father tells the future Sister Luke as he takes her to the convent. 'But I cannot see you obedient.'

What we see is the story of a nun who fails. The film does not criticise her for her failure, or the rule she failed to live by for its failure to absorb a woman of her quality. In fact, it makes no judg- ments: it is a serious effort to show us a moral and mental discipline, and it strikes me as authentic. We are shown how, to a woman of Sister Luke's kind, poverty (and the harsh conditions it imposes) means nothing, and chastity (and the renunciations it imposes) little, compared with the renunciation of mental freedom that implicit obedience implies: obedience prompt and perfect to a rule that governs even the tinest actions, like the closing of doors; obedience whatever the circumstances to the sound of the bell; obedience to rules governing silence and every sort of self- discipline, governing friendships, attach- ments, and antipathies; obedience to a mental discipline that forbids the indul- gence of memory, daydream, wishes, hope, disappointment; to a physical dis- cipline so strict that the smallest spon- taneous movement is likely to in- fringe it; obedience to the judgment of superiors (who may be fallible) because they stand in the place of God; and with this obedience the complete subjugation of personal judgment and desire, of self- will, pride, resentment, and anything we

might call 'spirit'. It is the story of a tormented life, an intolerable burden at last laid down; of a nun without the vocation for convent life at last forced by the violent circumstances of the war to admit her incapacity for it.

Audrey Hepburn plays Sister Luke, member of a Belgian order of nursing nuns with missionary outposts in the Belgian Congo. I think I have seen all Miss Hepburn's films and this seems to me to contain incomparably her best performance. In fact, she'gives that old impression of not performing but of living it: her face and movements changing with the changes and develop- ments of her character and spiritual con- dition. Her personality in it now seems mature: she seems (as nurses tend to) ageless. And she plays a most difficult part, that of the heroically good woman who is at the same time tense, dissatis- fied, unsuited to the particular way she has chosen. To play a satisfied saint would be a great deal easier; or a woman tormented by, say chastity or childless- ness. But none of these plain alterna- tives will do. The Congo doctor (Peter

Finch) who turns out to be her worst temptation is dangerous not so much because he attracts her physically (though her physical awareness is very well sug- gested) as because he points out to her what she already knows: the unadmitted resentments and spiritual torments. Her tuberculosis he can cure, but not these. To show us a saint is hard enough: to show a saint inanquee is harder. But the film and Miss Hepburn manage it. Dame Peggy Ashcroft is movingly right, and looks exactly the part, as the Congo reverend mother. Dame Edith Evans, back in Belgium, is stylishly good as another conventual tycoon. A long film, its two and a half hours never drag.

Quite another kettle of fish (as a teach-yourself-journalism course might tell you to link the unlinkable) is I Want to Live (director: Robert Wise; 'X' certificate), the story of Barbara Graham, who went to a Californian gas chamber for a murder the film claims she never committed. With all the stops

out and Susan Hayward: raucous, ghoulish, effective enough propaganda against the death sentence. Not for fun and hardly for werewolves.

The press show invitation to The Boy and the Bridge (director: Kevin Mc- Clory; 'U' certificate) told us to bring along a child. As I couldn't get there on the right day I didn't, and thank heaven, for the first quarter of an hour is enough to scare the wits out of any child and the rest is as mawkish, ill- scripted and mushily acted a piece of pretentiousness as you could find in a year of film-going. About a boy on Tower Bridge with a seagull : a pleasant enough idea, but quite nauseatingly put across. For good measure to its juvenile audience the Curzon adds a film on the mechanics of space travel, including the testing of men in space conditions ('Now the blood's draining out of his head,' etc, while you watch), and starting off with the mushroom of the atom bomb. Jolly fun for the school holidays.