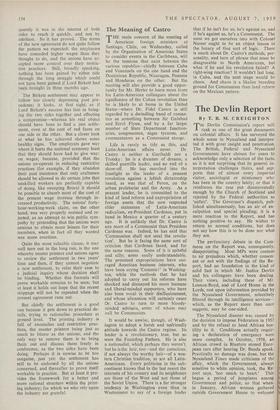 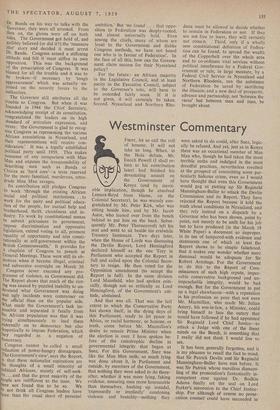 By T. R. M. CREIGHTON TRE Devlin Commission's report will rank as one of the great documents on colonial affairs. It has surveyed the whole scene in Nyasaland and interpre- ted it with great insight and penetration. The British, Federal and Nyasaland Governments have chosen for years to acknowledge only a selection of the facts, so it is not surprising that its general in- terpretation challenges theirs, and sup- ports that of almost every impartial visitor, sociologist or missionary who has been in the country lately; or that it reinforces the case put disinterestedly enough by the Church of Scotland and rejected by the Federal authorities as 'unfair'. The Governor's dispatch, pub- lished simultaneously, has an air of ex- culpation and special pleading; it is a mere reaction to the Report, and has nothing positive to say. He wishes to return to normal conditions, but does not say how this is to be done nor what they are.

The perfunctory debate in the Com- mons on the Report was, consequently, disappointing. Most MPs were content to air prejudices which, whether conson- ant or not with the findings of the Re- port, had no foundation in the kind of solid fact in which Mr. Justice Devlin and his colleagues have been dealing. Their views, including these of Mr. Lennox-Boyd, and of Lord Home in the Lords, rest upon information provided by the Nyasaland Government, selectiirely filtered through its intelligence services— which, as the Report more than once suggests, may be one-sided.

The Nyasaland disaster was caused by the decision to impose Federation in 1953 and by the refusal to heed African hos- tility to it. Conditions actually requir- ing a declaration of emergency were more complex, In October, 1958, an African crowd in Blantyre stoned Euro- pean cars after hearing Dr. Banda speak Practically no damage was done, but the Nyasaland Times made criticisms of the affair, which the Government, always sensitive to white opinion, took, the Re- port says, 'too much to heart.' This began a period of jumpiness among Government and police, so that when. in January, African women gathered outside Government House to welcome Dr. Banda on his way to talks with the Governor, they were all arrested. From then on, the gloves were off on both sides. The Government got hold of, and gullibly believed (or did it?) the 'massacre Plot' story and decided it must arrest Dr. Banda. Congress sensed a stiffening attitude and felt it must stiffen its own Opposition. This was the background of the proscription of Congress. It was blamed for all the trouble and it was to be broken—if necessary by 'tough aggressiveness' which was actually en- joined on the security forces by the authorities.

The Governor still attributes all the trouble to Congress. But when it was founded in 1944 the Chief Secretary, acknowledging receipt of its constitution, congratulated the leaders on its high standard of articulate expression, and Wrote: 'the Government is glad to recog- nise Congress as representing the various African associations in Nyasaland, and their representations will receive con- sideration.' It was a legally established Political party until 1959. This makes nonsense of any comparison with Mau Mau and exposes the irresponsibility of describing men such as Banda or Chisiza as 'hard core'—a term reserved for the more fanatical, murderous, retro- grade Mau Mau savages.

Its contribution still pledges Congress to work 'through the existing African social and political institutions. .. to Work for the unity and political educa- tion of the people, for mutual help and brotherhood, thrift, cleanliness and in- dustry. To work by constitutional means to submit grievances to government, Oppose discrimination and oppressive legislation, extend voting to all, promote equality of opportunity and aim consti- tutionally at self-government within the British Commonwealth.' It provides for a chaplain of Congress to preach at General Meetings. These were still its ob- jectives when it became illegal, criminal and subversive overnight on March 30.

Congress never executed any pro- gramme of violence, as Government did. The Report shows that much of the riot- ing was caused by puzzled inability to un- derstand what Government was doing and ugly incidents were commoner on the official than on the popular side. What made the Government's task im- Possible and separated it fatally from the African population was that it was trying simultaneously to lead them Paternally on to democracy but also despotically to impose Federation, which they regarded as a negation of democracy.

Congress cannot be called a small collection of power-hungry demagogues. ,rhe Government's view', says the Report, is that these nationalist aspirations are lhe thoughts of a small minority of Political Africans, mainly of self-seek- crs ... and that the great majority of the People are indifferent to the issue. We have not found this to be so. We 0 not think all Congress leaders have 'Pore than the usual share of personal ambition.' But 'we found . . . that oppo- sition to Federation was deeply-rooted, and almost universally held. Even among the chiefs, many of whom are loyal to the Government and dislike Congress methods, we have not heard one who is in favour of Federation'. In the face of all this, how can the Govern- ment claim success for their Nyasaland policy?

For the future: an African majority in the Legislative Council, and at least parity in the Executive Council, subject to the Governor's veto, will have to be conceded fairly soon. If it is not given, it will certainly be taken. Second, Nyasaland and Northern Rho- desia must be allowed to decide whether to remain in Federation or not. If they are not free to leave, they will certainly not remain. Third, only if a wholly new constitutional definition of Federa- tion can be found, to spread the wealth of the Copperbelt over the whole area and to co-ordinate vital services without political interference by a Federal Gov- ernment or rule, in large measure, by a Federal Civil Service in Nyasaland and Northern Rhodesia, can the substance of Federation be saved by sacrificing the illusion; and a new deal of prosperity. advance and partnership, not 'between the races' but between man and man, be brought about.