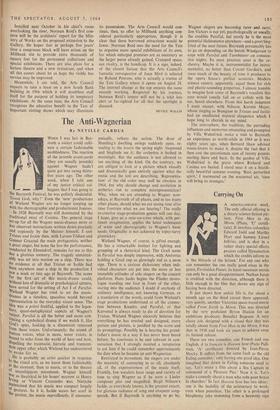 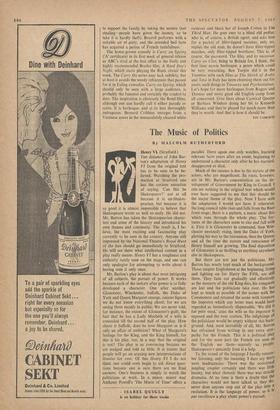 It just shows how unfair life is, for about a month ago on the third circuit there appeared, very quietly, another Victorian space-travel movie called From Earth to Moon. This was directed by the very proficient Byron Haskin for an ambitious producer, Benedict Bogeaus. A very classy job, designed with a visual flair that was totally absent from First Men in the Moon, it was shot in 1958 and took six years to achieve even its limited release.

There are two comedies, one French and one English. A la francais is Heaven Sent (Paris Pull- man, 'A' certificate) directed by Jean-Pierre Mocky. It suffers from the same fault as the old Ealing comedies: only having one good idea. One imagined that down in Ealing someone used to say, 'Let's make a film about a Sea Captain in command of a Pleasure Pier.' Now it is, 'Let's make a comedy about a man who robs poor boxes in churches.' In fact Heaven Sent has two ides: one is the inability of the aristocracy to work, even when penniless. The other is a prolonged blasphemy joke stemming from a heavenly sign

to support the family by taking the money (not stealing—people have given the money, so to take it is hardly theft). Bourvil performs with a suitable air of piety, and the intended bad taste has acquired a patina of French tastefulness.

The home-grown comedy is Carry on Spying (`A' certificate) in its first week of general release as ABC's rival at the box office to the lively and highly recommended Beatles film, A Hard Day's Night, which starts playing the Rank circuit this week. The Carry On series may lack subtlety, but at least it avoids the weedy refinement that passed for it in Ealing comedies. Carry on Spying, which should only be seen with a large audience, is probably the funniest and certainly the crudest to date. The inspiration is obviously the Bond films, although one can hardly call it either parody or satire. It is burlesque, and at its best thoroughly outrageous. Bernard Cribbins emerges froM a Viennese sewer in the immaculately cleaned white

raincoat and black hat of Joseph Cotten in The Third Alan. He goes over to a blind old pedlar, who is, of course, a British agent, and asks him for a packet of filter-tipped matches, only no, replies the old man, he doesn't have filter-tipped matches, only filter-tipped bootlaces. This is, of course, the password. The film, and its successor Carry on Cleo, bring to Britain for, I think, the first time movie burlesque, a genre which could be very rewarding. Ben Turpin did it in the Twenties with such films as The Shriek of Araby and Toto in Italy has been churning-them out for years, such things as Totosexy and Psychosissimo. Let's hope for more burlesques from Rogers and Thomas and more good old English camp from all concerned. Give lines about Carnival Queens or Barbara Windsor doing her bit to Kenneth Williams and they're played for much more than they're worth. And that is how it should be.