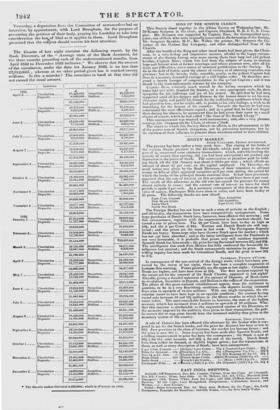 SONS OF THE SCOTCH CLERGY.

This Society dined together in the Albion Tavern on Wednesday last ; Mr. M'Kenzie Simpson in the chair, and Captain Shepherd, H. E. I. C. S. Crou- pier. Mr. Simpson was supported by Captain Ross, the distinguished navi- gator, one of those who were originally concerned in the formation of the Society, Mr. Sergeant Spankie, M.P., Mr. Wilkie the painter, Mr. Simpson the Go- vernor of the Hudson Bay Company, and other distinguished Suns of the Church.

After the health of the Kingand other usual toasts had been given, the Chair-. man, in a very feeling and impressive manner, alluded to the happy circum- stance of the Society having once more among them their long. lost and gallant brother, Captain Ross ; whose fate had been the subject of many an anxious hope and fervent wish at former meetings, and whose presence now, after all his trials and difficulties, was a source of unmixed gratification to the Society. To die in the field of battle, amid the cheers of victory or of admiring comrades, was glorious; but to die hourly, daily, monthly, yearly, as the gallant Captain bad done in a manner, demanded courage of a still higher order. He therefore pro- posed a hearty bumper of congratulation to the gallant Captain ; and it was drunk in the most enthusiastic manner by the company. Captain Ross, evidently much moved by the feeling reception which his name had met with, thanked the Society, in a very appropriate style, for their sympathy for his sufferings and joy at his return. He said that he had been supported amid all his dangers and distress by the honest desire to set his own character right, and justify his friends for the unflinching confidence which they had placed in him, and he might add, in justide to his own feelings, a wish to do something for the honour of his country. Towards the Society he had ever entertained the most affectionate regard ; and as a proof that he had not forgot them during his absence, he annouuced that he had given their panic to a small cluster of islands, which he had called "the Sons of the Scotch Clergy !"

This announcement was received with acclamation; and, after a very pleasant evening, 3/r. Simpson left the Chair, at eleven o'clock.

The object to which this Society directs its efforts, is the advancement in life of the poorer sons of Scotch clergymen, not by pecuniary assistance, but by the exertion of their influence to procure them situations suited to their abilities.