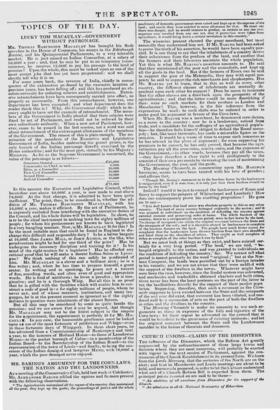 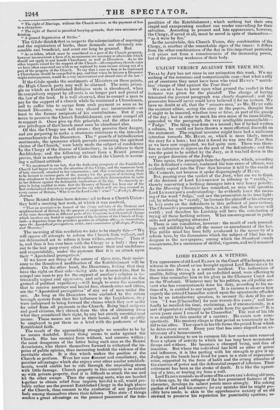 CHURCH UNIONS—CLAIMS OF THE DISSENTERS.

THE influence of the Dissenters, which the Reform Act greatly augmented by the enfranchisement of those large towns and districts where they are most numerous, will probably be exerted with vigour in the next session of Parliament, against the con- tinuance of the Church Establishment in its present form. We learn from the Leeds Mercury, that the sectaries of the North are on the alert; and that in Manchester and Leeds meetings are about to be held, and memorials prepared, in order to let the Cabinet understand what sort of a Church Reform Bill is expected from them. The principal points insisted on are said to be these- " An abolition of all exactions from Dissenters for the support of the Church.

" An admission to all th ; National Seminaries of Education.

" The right of Marriage, without the Church service, or the payment of fees to a clergyman.

" The right of Burial in parochial burying-grounds, their own ministers of- ficiating.

" A general Registration of Births."

The Globe thinks') that as respects the solemnization of marriage and the registration of births, these demands are obviously rea- sonable and beneficial, and must ere long be granted. But " As to tithes, which must be considered as a part of the Church property, however inconvenient a form of it, no measures are necessary or admissible which should not apply to and benefit Churchmen as well as Dissenters. As to the other imposts raised for the support of the Church—all compulsory church-rates we have often expressed our wish to see replaced by some income arising out of a part of the property of the Church. To ,ay that a man so long as he continued a Churchman should be compelled to pay, and that when he became a Dissenter might resist payment, would be a very inconvenient and absurd state of the law.'t If the Globe speaks the sentiments of Ministers on these points, the High Church party may well be alarmed. The main princi- ple on which an Established Religion rests is abandoned, when its compulsory support by all sects is no longer part and parcel of the law of the land. It is well observed, that to compel a man to pay for the support of a church while he continued a Churchman, and to suffer him to escape from such payment as soon as he turned Dissenter, would be very absurd and inconvenient—at least to the former recipients of his contributions. But if you mean to preserve the Church Establishment, you must compel all to support it. Once give up this principle, and the other exclu- sive privileges of the Church must soon be abandoned also.

Of this the Clergy are well aware ; they perceive their danger, and are preparing to make a strenuous resistance to the intended encroachments of the Dissenters. The " growth of latitudinarian sentiments, the ignorance which prevails concerning the spiritual claims of the Church," were lately made the subject of condolence by the Clergy of the diocese of Canterbury, in an address to their Archbishop; and the following extract from a Bristol journal proves, that in another quarter of the island the Church is assum- ing a militant attitude.

" We mentioned in our last, that the darkening prospects of the Established Church bad begun to excite the attention of the Clergy, and the numerous body of laity sincerely attached to her communion ; and that associations were about to be formed in various parts of the country for the purpose of declaring their firm attachment to her doctrines and discipline, and their determination to unite iu her defence against the fashionable innovations of the day. We sincerely re- joice in being enabled to state, that the Deanery of Bristol has been one of the first ecclesiastical districts to respond to the cry which will ere long resound in every corner of Britain, Who is on the Lord'sside ? who?' "—Farley's Bristol Journal.

These Bristol divines have determined to form a Church Union : they held a meeting last week, at which it was resolved,

"'That an association be formed of the clergy and laity of the Deanery and neighbourhood of Bristol, for the purpose of cooperating with other associations of the same description in different parts of the kingdom, to withstand ;ill change which involves any denial or suppression of the doctrines of the Chinch of Eng- land--a departure from the primitive practice in religious offices, or innovations upon the Apostolical prerogatives, order, and commission of Bishops, Priests, and Deacons."

The meaning of this resolution we take to be simply this—" We will oppose all attempts to reform the Church from without, and are determined not to reform it from within, ourselves." Titus it is, and thus it has ever been with the Clergy as a body : they re- sist to the last gasp every effort to increase their real usefulness and respectability, under the pretence that it is an attack upon their "Apostolical prerogatives."

If we know any thing of the nature of these men, their resist- ance to the threatened modification of the Establishment will be obstinate. On the other hand, the Dissenters, feeling that they have the right on their side—being able to demonstrate, that to compel one man to pay for the support of another's religion is in- trinsically unjust and oppressive, and only to be defended on the ground of political expediency-twill laugh to scorn the assertion that to receive marriage and burial fees, church-rates and tithes, are the "Apostolical prerogatives" of any set of men under the sun. As long as the Dissenters were excluded by the rotten borough system from their fair influence in the Legislature, they were indisposed to bring forward the claims which they now make for relief from all payments to the Church. Being loyal subjects and good citizens, they shrunk from the idea of obtaining even what they considered their right, by any but strictly constitutional means. These means are now in their hands, and will speedily be employed to put them on a level with the professors of the Established faith.

The result of the approaching struggle we consider to be by no means doubtful. Every thing seems to make against the Church. She has enemies from without, and enemies within ; the most dangerous of the latter being such men as the Bristol Associators, who thrust themselves forward to withstand the im- petus of public opinion, thus increasing tenfold the violence of the inevitable shock. It is this which makes the position of the Church so perilous. Were her sons discreet and conciliatory, the peculiar advantages which she enjoys over other similar establish- ments, would enable her to ride through the impending storm with little damage. Church property in this country is so mixed lap with private property, that it is difficult to attack the one and let the other escape. Then the opposing sects, who are banded t)gether to obtain relief from imposts hateful to all, would pro- bably rather see the present Established Clergy in the high places of the Church, than, consent to the exaltation of any particular body among themselves above their fellows. This state ef things confers a great advantage on the present possessors of the tern-

poralities of the Establishment ; which nothing but their own stupid and exasperating conduct can render unavailing for their salvation. According to present and late appearances, however, the Clergy, if saved at all, must be saved in spite of themselves—. " as it were by fire."

In the meanwhile, this Church Union, this combination of the Clergy, is another of the remarkable signs of the times : it differs from the other combinations of the day in this important particular —it arises not from a consciousness of the increasing power, but of the growing weakness of their body.