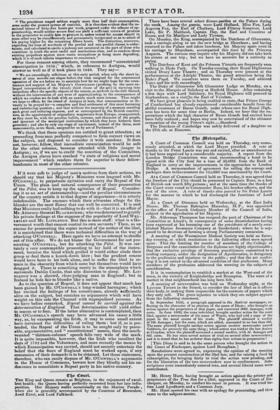 A Court of Common Council was held on Thursday, very nume- rously attended, at which the Lord Mayor presided. A vote of thanks to Sir Peter Laurie was put and carried, after an amendment on it had been negatived by a considerable majority. A report from the London Bridge Committee was read, recommending a bond to be signed with the City Seal for a loan of 50,0001. from the Bank of England to carry on the improvements in the approaches to London Bridge. A memorandum of agreement for selling the scavage and packages dues to Government for 15.5,000/ was sanctioned by the Court.

At a Court of Common Council held on Thursday, it was agreed that the freedom of the City should be presented to Captain Ross, in a box of British oak worth fifty guineas ; and at the same time the thanks of the Court were voted to Commander Ross, his brother officers, and the rest of the crew. A vote of thanks also passed to Sir Peter Laurie for the manner in which he had discharged the functions of Lord Mayor.

At a Court of Directors held on Wednesday, at the East India House, Mr. Thomas Babington Macaulay, M.P., was appointed to the office of Fourth Ordinary Member of the Council of India, subject to the approbation of his Majesty.

Mr. Alderman 'Thompson has resigned the post of Chairman of the Committee at Lloyd's, in consequence of some dissatisfaction having been expressed at his becoming one of the presidents of a newly-esta- blished Marine Insurance Company at Sunderland; where he is sup- posed to be desirous of forming a strong Parliamentary connexion.

A meeting of the Westminster Medical Society was held on Satur- day evening, at which resolutions to the following effect were agreed upon : That the limiting the number of members of the College of Surgeons and the examination for the diploma are highly objectionable; that the exclusive privilege of licensing practitioners committed to a trading company, under the designation of Apothecaries, is derogatory to the profession and injurious to the public ; and that the act confer- ring it is not suited to the advanced condition of that profession. Many members of the profession addressed the meeting on the subjects of consideration.

It is in contemplation to establish a market at the West-end of the town, in the vicinity of Knightsbridge and Brompton. The want of a market in that neighbourhood has long been felt.

A meeting of newsvenders was held on Wednesday night, at the Lyceum Tavern in the Strand, to consider the law of libel as it affects their body, in making them responsible for the contents of papers which they only sell. The gross injustice to which they are subject appears from the following statement.

In September 1632, a paragraph appeared in the Satirist newspaper, re- flecting on the character of an attorney of the name of Dicas; who brought an action against the proprietors of that paper, and recovered 300/. damages, with costs. In June 1833, the same individual brought another action for the same libel, against a newsvender of the name of Warne, who had sold a copy of the paper in the usual course of his trade. The plaintiff obtained a verdict of 10/. damages ; but the costs, which are added, amounted to no less than 851. The same plaintiff brought another action against another newsvender named Goldwin, for precisely the same thing; which action was tried at the last Msizes at Croydon, when the plaintiff recovered a second verdict, with Si. damages and 851. costs. He has since served notices of trial on several other newsvenders; and it is stated that he has no fewer than eighty-four actions in preparation !

[This Dices is said to be the same person who brought the action in the Court of Exchequer, against Lord Brougham.] Resolutions were agreed to, expressing the opinion of the meeting upon the present construction of the libel law, and for raising a fund by subscription, for bringing fairly to trial the action now pending, and for the liberation of the two newsvenders now in confinement.. Sub- scriptions were immediately entered into, and several liberal sums were contributed.