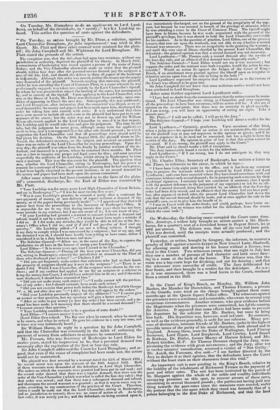 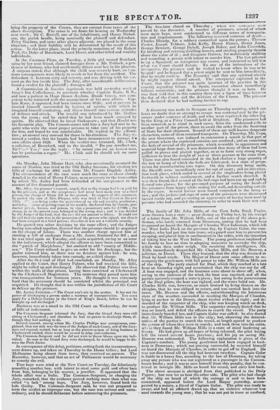 In the Court of King's Bench, on Monday, Mr. William

John Bankes, the Member for Dorsetshire, and Thomas Flowers, a private in the Guards, were tried on the charge brought against them some months ago at the Queen Square Police-office. The witnesses against the prisoners were a watchman and a constable, who swore to several very suspicious circumstances. Another witness, who gave evidence before the Magistrates when the prisoners were committed, has left the country, ror America. It appeared that some efforts had been made to prevent his departure by the solicitor for Mr. Bankes, but noire to bring him back. His deposition was, however, read in Court. Its contents, as well as the evidence generally, is unfit for our colonies. Many per- sons of distinction, intimate friends of Mr. Bankes, spoke in the highest possible terms of the purity of his moral character, both abroad and in England. Among these, were the Duke of Wellington, Lord Fitzroy Somerset, Lord Ripon, Lord Burghersh, Lord Cowley, Lord Stuart de Rothsay, Dr. Butler, former Master of Harrow School, and Mr. Robert Gordon, M.P. Sir Thomas Denman charged the Jury, reca- pitulating the evidence with great minuteness ; and the Jury, after ten or twelve minutes' consultation, returned a verdict of "Not Guilty :" Mr. Astell, the Foreman, also said—" I am further directed by the Jury to declare it as their opinion, that the defendants leave the Court without the least stain on their characters from this trial."

An important suit is now pending in the King's Bench, relative to the liability of the inhabitants of Richmond Terrace to the payment of poor and other rates. The suit has been instituted by the parish of St. Margaret against the whole of the noble and wealthy individuals occupying premises on this spot, to recover arrears of these rates, amounting to several thousand pounds ; the parties not having paid any thing towards the poor-rates since the mansions were erected, under the pretext that the site upon which they stand was formerly that of a palace belonging to the first Duke of Richmond, and that the land

being the property of the Crown, they are exempt from taxes of the above description. The cause is set down for hearing on Wednesday next week ; Sir C. Burrell, one of the inhabitants, and Henry Nichol- son, the parish beadle, being nominally the plaintiff and defendant. Privy Gardens, and some other places adjacent, are placed in the same situation ; and their liability will be determined by the result of this action. In the latter place, stand the princely mansions of Sir Robert Peel, the Duke of Buccleuch, Lord Dover, and other titled and wealthy individuals.

In the Common Pleas, on Tuesday, a little girl named Rowland, suing by her next friend, claimed damages from a Mr. Bullock, a gen- tleman of fortune, who had accidentally driven over her in his phaeton. A surgeon stated, that although the child was severely hurt, no inju- rious consequences were likely to result to her from the accident. T he defendant is between sixty and seventy, and was driving with his ser- vant on the box beside him. The Jury, after considerable deliberation, found a verdict for the plaintiff ; damages 501.

A Commission de lunatic° inquire:id° was held yesterday week at Gray's Inn Coffeehouse, to ascertain whether Captain Kane, R.N., and now a patient in Hope House Asylum, Brook Green, was com- petent to be intrusted with the management of his own anirs. Cap- tain Kane, it appeared, had been insane since 1826; and at present he fancied himself surrounded by legions of spirits, with which he imagined himself combating, and threw himself into various attitudes of defence and attack. The invalid was introduced by Mr. Mullins into the room ; and he stated that he had been much annoyed by spirits. He observed that he loved Shakspeare ; and that Handet was his favourite play. The Commissioner told him a Jury had met to in- quire who were the most proper persons to take care of his property for him, and hoped he was comfortable. He replied in the affirma- tive ; an answer very unusual for those in his situation. The Jury re- turned a verdict, that the lunatic bad been incompetent to manage Ws own affairs since 1826. When the verdict was returned, Mr. Clark, a solicitor, of Brentford, said to the invalid, " Do you recollect me, Sir ?"—" Yes ;" was the reply: " by nature you are an limiest mall, but by profession a rogue." Mr. Clark said be should ask no more questions.