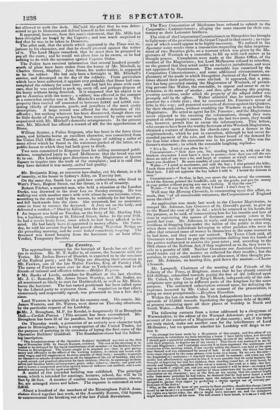 Mr. Benjamin King, an extensive lace-dealer, cut his throat, in

a fit of insanity, at his house in Sydney's Alley, on Tuesday last.

On the same day, Sarah Lee a gold-lace embroiderer, who lived in Watt's Place, Regent Street, cut her throat, in a fit of insanity.

Robert Pilcher, a married man, who held a situation at the London Docks, was drowned in the river Lea on Sunday evening. He was walking out with another man's wife with whom he was intimate, when, according to the story told by the woman, he suddenly let her hand go, and fell backwards into the river. She screamed, but no assistance came in time to recover the deceased. A Jury sat on the body, and delivered a verdict—" Died by falling into the river Lea."

I "An inquest was held on Tuesday, on the body of Mr. Harding Hal- len, a lapidary, residing at 10, Edward Street, Soho. In the year 1831, he had a severe brain fever, since which he bud been affected in his mind. He had lately been disappointed in money affairs. On Satur- day, he told his servant that be had passed along Waterloo Bridge on the preceding morning, and the water looped remarkably tempting. The deceased was found hanging from the banisters in an hour after. Verdict, Temporary Insanity.