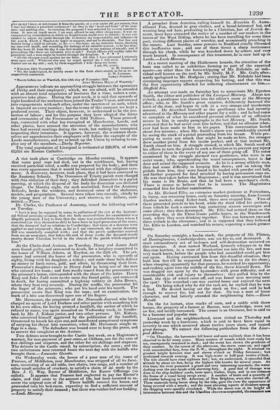 Page 7, 7 December 1833 — received parochial relief, a coffin was prepared for the body
Close

received parochial relief, a coffin was prepared for the body

;_ and there was every appearance that it would be interred with due religious cere- mony. A discovery, however, took place, that it had been conveyed to

-the Anatomy Schools. The Overseers of Trinity parish were charged with this violation of their duty; they defended themselves in a parish meeting, at which the disposal of the body for dissection was declared illegal. On Monday night, the mob assembled, forced the Anatomy Schools, broke the windows, and destroyed some of the skeletons, models, and preparations. Several were taken into custody, chiefly by the young men of the University; and nineteen, we believe, com- mitted.— Times.

Dr. Clarke, the Professor of Anatomy, issued the following notice on Tuesday.

" Lest it may be supposed by some, in palliation of the riot at the Anatomi- cal School yesterday evening, that the body received there for examination was

illegally procured, I beg to state that the same was received from those whom I

conceived (as they themselves did) to have been in legal .possession of the same; that the deceased had no relations in Cambridge; that those at a distance were applied to and concurred ; that, as far as I am concerned, the recent Anatomy Bill was essentially complied with ; and that the parish authorities receiveil from me an assurance, that before the end of three weeks the deceased should receive decent Christian burial in the church of the parish which supported him."

At the Chelmsford Assizes, on Tuesday, Henry and James Judd were found guilty, and sentenced to death, for a burglary committed in

the house of William Adams, at Roydon, on the 25th ult. The pri-

soners bad entered the house of the prosecutor, who is upwards of eighty, living with his daughter, a widow; and made them both deliver up money in batik-notes, gold, and silver, by threatening their lives. Prosecutor's daughter swore to Henry Judd as being one of the men who entered her room ; and foot-marks traced from the prosecutor's to the prisoner's house, corresponded with the shoes of the latter. Henry

King and John Judd were on the same day found guilty, and sentenced to death, for having committed a highway robbery on John Brown,

whom they beat very severely. During the scuffle, the prosecutor bit the finger of the prisoners ; who put his hand over his mouth. The prosecutor swore that King was the man ; and on examination, the mark of a bite was discovered upon one of his fingers.

Mr. Hernaman, the proprietor of the Newcastle Journal, who lately charged an agent of Lord Durham and other parties with assaulting him in his own office, for having printed a handbill, the author of which he refused to name, was again assaulted on Wednesday week, in Sunder-

land, by Mr. J. Kidson junior, and two other persons. Mr. Kidson, who conceived himself aggrieved by the publication of the handbill, threatened to knock his eyes out, and manifested unequivocal symptoms of carrying his threat into execution, when Mr. Hernaman sought re- fuge in a shop. The defendant was bound over to keep the peace, and to answer the complaint at the Assizes.

Two debtors were brought to the Castle last week, on a Magistrate's warrant, for non-payment of peor-rates, at Oldham, one for the sum of five shillings and sixpence, and the other for six shillings and sixpence. The debtors in the Castle raised, by subscription, the sums ; and the two unfortunate men returned home the next day with the bailiffs who

On Wednesday week, the house of a poor man of the name of Pearson, of Middleton, near Manchester, was stripped of all its furni- ture, consisting of an old table, two chairs, two mugs, and a number of

.other small articles of crockery, to satisfy a claim of 5d. made by the Rev. J. C. Way, Rector of Middleton, for Easter Offerings (so called). It appears that Pearson bad neglected to pay the Rector's claim, and that costs to the amount of 18s. had been incurred to re- cover the original sum of 5d. Three bailiffs entered the house, and proceeded into his bed-room, expecting to find a sufficient amount of property to satisfy their demand ; but there was neither bed nor bedding. .—Leeds Mercury.

A preacher from America, calling himself St. lEnochia E. Aama- ellionel Fox, dressed in gray clothes, and a broad-brimmed hat, and wearing long red hair, professing to be a Christian, but of Jewish de- scent, must have attracted the notice of a number of our readers in the towns of the West Riding, where he has been travelling for some time past, visiting different places of worship, and occasionally preaching in the streets. Last Sunday, some persons in Bradford cruelly illtreated this inoffensive man ' • and one of them thrust a sharp instrument through his cheek, while he was knocked down by others and very- much bruised. In consequence of this treatment, he is now laid up-in Leeds.—Leeds Mercury.

At a recent meeting of the Holderness hounds, the attention of the hunt was called to an exhibition forming no part of the expected sports—no other than the horsewhipping of Mr. Ridsdale, an indi- vidual well known on the turf, by Mr. Gully, M. P. Mr. Gully after- wards apologized to Mr. Hodgson ; stating that Mr. Ridsdale had been. circulating improper reports respecting his betting, and that this was the first opportunity afforded for inflicting chastisement on him.— Sheffield Iris.

An attempt was made on Saturday last to assassinate Mr. Egerton Smith, the editor and publisher of the Liverpool Mercury. About ten o'clock, a gentleman was shown into the editor's room at the Mercury office; who, to Mr. Smith's great surprise, deliberately fastened the latch of the door, and began to talk in a very strange and incoherent manner. He described himself as the gentleman who had recently advertised in the Mercury and other papers for a Nvife ; and he had come to complain of what be considered personal allusions of an offensive nature to him in sundry paragraphs in the last Mercury. Mr. Smith protested that he had never seen him before, and that no allusion what- ever had been made to him in his paper. This conversation lasted about five minutes ; when Mr. Smith's alarm was considerably excited by seeing the stock of a pistol protruding from his breast. While pre- paring to resist any attack that might be made on him, the stranger drew another pistol from his inside pocket, and at that instant Mr. Smith closed on him. A struggle ensued, in which Mr. Smith used all his efforts to turn the pistols in such a direction as to prevent any injury to either of them in the event of any one of them going off. The noise occasioned by the struggle alarmed two gentlemen, who were in an outer room; who, apprehending the worst consequences, burst in the door and seized the supposed assassin. As he is a strong athletic man, they had some difficulty in keeping him down; and on taking the pistols from him, they were found to be loaded with powder and ball, and further prepared for fatal mischief by having percussion caps on. He was then taken before the Magistrates ; and it was ascertained that his name is De Bruin. and that he had been a merchant's clerk. There is reason to believe that he is insane. The Magistrates remanded him for further examination.

As Mr. Richard Ellis, an extensive market-gardener at Pattenham, in Surry, was returning home, early on Saturday morning, from Covent Garden market, along Esher road, three men stopped him. Two of them presented pistols to his head, while the third rifled his pockets ; from which he took a canvass bag, containing sixteen sovereigns and some silver; they then decamped. Mr. Ellis had noticed them on the preceding day, at the Three Goats public-house, in the Wandsworth road, where they were drinking together. This was between two and three o'clock in the afternoon ; and it is supposed that they followed Mr. Ellis to London, and watched his return, expecting a much greater booty.