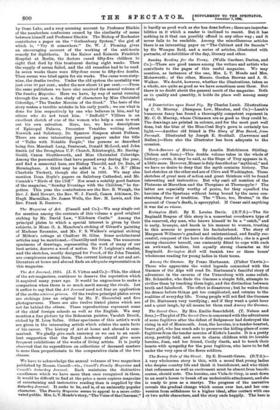 Page 12, 7 December 1895 — We have to acknowledge the annual volumes of two magazines
Close

We have to acknowledge the annual volumes of two magazines

published by Messrs. Cassell—viz., Cassell's Family Magazine and Cassell's Saturday Journal. Each maintains the distinctive excellences which we have more than once recognised in them. It would be difficult to find at the price a more copious magazine of entertaining and instructive reading than is supplied by the Saturday Jounuil. It seeks to be, and is, of an eminently popular character. The Family Magazine seems to appeal to a more culti- vated public. Mrs. L. T. Meade's story," The Voice of the Charmer,"

is hardly as good work as she has done before ; there are improba- bilities in it which a reader is inclined to resent. But it has nothing in it that can possibly offend in any other way ; and it never fails to be readable. Among the miscellaneous articles there is an interesting paper on "The Cabinet and its Secrets" by Sir Wemyss Reid, and a series of articles, illustrated with portraits, of notabilities of the day, literary and other.