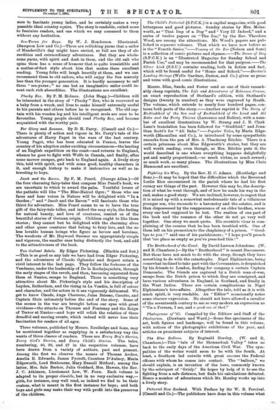 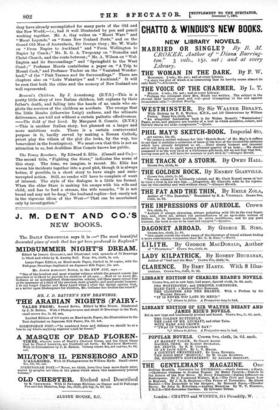 Pictorial New Zealand. With Preface by Sir W. B. Percival.

(Cassell and Co.)—The publishers have done in this volume what they have already accomplished for many parts of the Old and the New World,—i.e., bad it well illustrated by pen and pencil working together. Mr. A. Gay mites on "Maori Wars" and "Maori Legends," on "Some New Zealand Ports," and on the Grand Old Man of Australasia, Sir George Grey; Mr. W. Waite on "From Napier to Auckland" and "From Wellington to Napier by Coach;" Mr. R. G. A. Twopenny on "Dunedin and Christ Church, and the route between;" Mr. A. Wilson on "Wel- lington and its Surroundings" and "Springfield to the West Coast ; " Professor Morris contributes a paper on "A Trip to Mount Cook," and Professor Tucker on the "Vanished Wonder- land," of the "Pink Terrace and its Surroundings." There are chapters also on "Lake Wakatipn " and "Auckland." It will be seen that both the cities and the scenery of New Zealand are well represented.