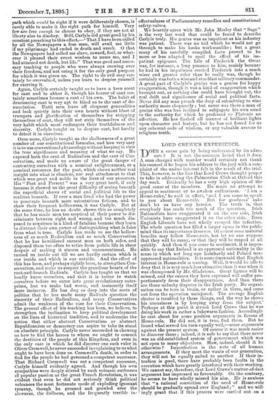 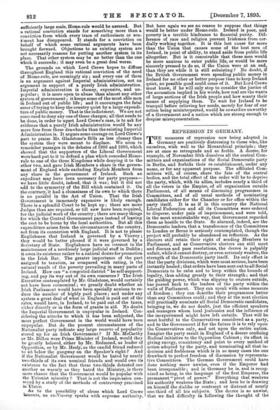 LORD CREWE'S EXPERIENCE. D OES a cause gain by being underrated

by its advo- cate? It is not the common belief that it does. A man charged with murder would certainly not thank his counsel if he began his address to the jury with a com- plaint of the undue interest felt in the result of the trial. This, however, is the line that Lord Crewe thought proper to take in addressing the Palmerston Club at Oxford this day week. Evidently he has a very high opinion of the good sense of the members. He made no attempt to appeal to sentiment or to awaken enthusiasm. • I am a Home-ruler,' he said in effect, and I am come to speak to you about Home-rule. But for goodness' sake don't let us have any heroics. The truth is, that everybody has made too much of the question. Irish Nationalists have exaggerated it on the one side, Irish Unionists have exaggerated it on the other side. Even English Liberals have not wholly escaped the infection. The whole question has filled a larger space in the public mind than its importance deserves. Of course some material benefits may follow Home-rule, but let no one suppose that they will be many, or that they will be reaped at all quickly. And then if you come to sentiment, it is impos- sible to say that Ireland is an oppressed nationality in the sense in which not long ago Lombardy and Poland were oppressed nationalities. It is sometimes said that English interest in Home-rule is waning. Well, it would be idle to deny that it is very much less attractive than it was when it was championed by Mr. Gladstone. Great figures will be missed, and the causes they have espoused will suffer pro- portionately from their disappearance. And then there are those unlucky disputes in the Irish party. No organi- sation can be torn in twain, or rather in three, and come out from the operation uninjured. The average English elector is troubled by these things, and the way he shows his uneasiness is by keeping away from the subject.' Perhaps at this point it struck Lord Crewe that he was doing his work in rather a lukewarm fashion. Accordingly he cast about for some positive arguments in favour of Home-rule. He did not, it is true, find them. But he found what served his turn equally well,—some arguments against the present system. Of course it was much easier to discover these ; indeed, it is safe to say that there never was an old-established system of government which was not open to many objections. How, indeed, should it be otherwise ? Imperfection is the note of all human arrangements. If they meet the wants of one generation, they will not be equally suited to another. If their in- tention is good, there have probably been faults in the execution which have greatly interfered with their working. We cannot say, therefore, that Lord Crewe's matter-of-fact argument has impressed us favourably. On the contrary, he seems to have wholly missed his aim. He is anxious that "a rational conviction of the need of Home-rule should be gradually spread over England ;" and we will- ingly grant that if this "process were carried out on a sufficiently large scale, Home-rule would be assured. But a rational conviction stands for something more than a conviction from which every trace of enthusiasm or sen- timent has disappeared. It stands for a conviction on behalf of which some rational arguments have been brought forward. Objections to an existing system are not necessarily reasons for putting another system in its place. That other system may be no better than the one which it succeeds ; it may even be a great deal worse.

The grounds on which Lord Crewe hopes to diffuse throughout England this rational conviction of the need of Home-rule, are seemingly six ; and every one of them is an argument against Imperial administration, not an argument in support of a purely Irish administration. Imperial administration is clumsy, expensive, and tin- popular; it is more open to abuse) than almost any other system of government ; it keeps some of the most able men in Ireland out of public life ; and it encourages the fatal error of trying to keep the country quiet by a large expendi- ture of public money. That is the indictment. We are not concerned to deny any one of these charges; all that needs to be done, in order to upset Lord Crewe's case, is to ask for evidence that a purely Irish administration would be any more free from these drawbacks than the existing Imperial Administration is. It argues some courage on Lord Crewe's part to praise Mr. Gladstone's Bills as less clumsy than the system they were meant to displace. We seem to remember passages in the debates of 1886 and 1893, which showed that the supporters of the Liberal Government were hard. put to it to defend a plan which conceded Home- rule to one of the three Kingdoms while denying it to the other two, and gave Irish Members a share in the govern- ment of England while excluding English Members from any share in the government of Ireland. Such an expedient may have been necessary for party purposes— we have little doubt, indeed, that it was ; but it did not add to the symmetry of the Bill which contained it. On the contrary, it had a clumsiness of its own to which there is no parallel in the Act of Union. That the Irish Government is immensely expensive is likely enough. There is a splendid Court to be kept up ; there are more Judges than are required, or till now have been required, for the judicial work of the country ; there are many things for which the Central Government pays instead of leaving the cost to be borne by the local authorities. But all this expenditure arises from the circumstances of the country, not from its connection with England. It is not to please Englishmen that Ireland is governed by a Viceroy ; they would be better pleased if it were governed by a Secretary of State. Englishmen have no interest in the maintenance of a needlessly large judicial staff in Dublin ; it owes its existence rather to a natural desire for promotion in the Irish Bar. The greater importance of the part assigned to taxation, as compared with rating, is the natural result of the poverty prevailing in many parts of Ireland. How can "a congested district "be self-support- ing, and pay its way out of its own resources ? The Irish Executive contemplated by Mr. Gladstone, would certainly not have been economical ; we greatly doubt whether an Irish Parliament would have been specially anxious to re- duce the number of highly paid places ; and under any system a great deal of what in England is paid out of the rates, would have, in Ireland, to be paid out of the taxes, either directly or in the form of grants in aid. No doubt the Imperial Government is unpopular in Ireland. Con- sidering the attacks to which it has been subjected, the most perfect Government in the world would have been unpopular. But do the present circumstances of the Nationalist party indicate any large reserve of popularity stored up for an Irish Government ? If Mr. McCarthy or Mr. Dillon were Prime Minister of Ireland, would they be greatly beloved, either by Mr. Redmond, as leader of Opposition, or by Mr. Healy, as the candid friend reduced to sit below the gangway on the Speaker's right ? And if the Nationalist Government would be hated by nearly two-thirds of its own nominal friends and would owe its existence to the fact that these two-thirds detested one another as warmly as they hated the Ministry, is there more chance that the Government would be popular with the Unionist minority ? That is not the impression con- !eyed by a study of the methods of controversy practised in Ulster.

As to the possibility of abuse which Lord Crewe laments, an ex-Viceroy speaks with supreme authority. But here again we see no reason to suppose that things would be better under Home-rule. Ireland is poor, and poverty is a terrible hindrance to financial purity. Dif- ference of race and religion prevent Irishmen from cor- dially working together. It is this last cause far more than the Union that causes some of the best men of Ireland, in point of ability, to stand aside from public life altogether. But is it conceivable that these men would be more anxious to enter public life, or would be more sincerely pressed to do so, if the Union were at an end, than they are while it is still subsisting ? No doubt, if the British Government were spending public money in Ireland for no other or better purpose than to keep Ireland quiet, no possible good could come of it. But Lord Crewe must know, if he will only stop to consider the justice of the accusation implied in his words, how real are the wants of large sections of the Irish people and how scanty their means of supplying them. To wait for Ireland to be tranquil before relieving her needs, merely for fear of our action being misinterpreted, would be cowardice unworthy of a Government and a nation which are strong enough to despise misrepresentation.