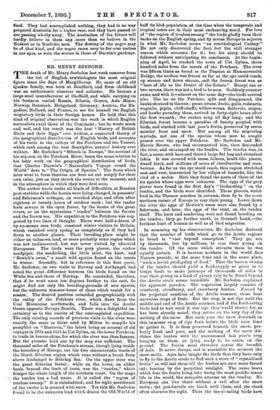 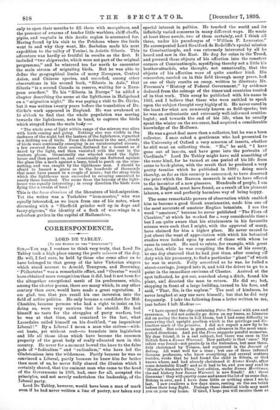 THE death of Mr. Henry Seebohm last week removes from the list of English ornithologists the most original figure since the days of Macgillivray. He came of an old Quaker family, was born at Bradford, and from childhood was an enthusiastic observer and collector. He became a large steel manufacturer at Sheffield, and while carrying on his business visited Russia, Siberia, Greece, Asia Minor, Norway, Denmark, Heligoland, Germany, Austria, the En- gadine, Holland, and France, to see for himself the English migratory birds in their foreign homes. He held that this kind of original observation was the work in which English naturalists excel those of the Continent ; but he wrote much and well, and the result was the best "History of British Birds and their Eggs" ever written, a connected theory of the geographical distribution of English birds, and accounts of his visits to the valleys of the Petchora and the Yenisei, which rank among the best descriptive natural history ever written. Mr. Seebohm's "Siberia in Europe," the account of his sojourn on the Petchora River, bears the same relation to his later work on the geographical distribution of birds, that Charles Darwin's "Naturalist's Voyage round the World" does to "The Origin of Species." The facts which later went to form theories are here set out simply for their own value, just as they struck the writer at the moment, and in the atmosphere in which they were first seen.

The author wrote under all kinds of difficulties, at Russian post-stations while the horses were being changed, in peasants' and fishermen's cottages, on wrecked ships, and often after eighteen or twenty hours of outdoor work ; but the reader feels always in the open forest, by the banks of the great rivers, or on the mysterious "tundra" between the forests and the frozen sea. His expedition to the Petchora was sug- gested by two lines of thought. There were half-a-dozen of by-no-means rare birds, constant winter visitors to Britain, which vanished every spring as completely as if they had flown to another planet. Their breeding-place might be either an unknown land, or more probably some region which was not undiscovered, but was never visited by educated Europeans. The birds were the grey plover, the curlew sandpiper, the sanderling, the little stint, the knot, and "Bewick's swan," a small wild species found on the coasts in winter. Secondly, but in reference to this first quest, Mr. Seebohm, on two visits to Norway and Archangel, had noted the great difference between the birds found on the White Sea and those of Norway. He concluded, therefore, that if he went some ten degrees further to the east, he might find not only the breeding-grounds of new species, but the unknown summer-home of those which vanish for a season. The desired position coincided geographically with the valley of the Petchora river, which flows from the Ural Mountains northwards, and falls into the Arctic Ocean opposite Novaya Zembla. There was a delightful un- certainty as to the results of the contemplated expedition. The only existing records of previous visits to the river were exactly the same as those used by Milton to compile his pamphlet on " Moscovia," the latest being an account of old voyages in 1614 and 1615 to Ust Zylma, on the lower Petchora, to trade in beaver-skins, for which the river was then famous. But the promise held out by the map was sufficient. The thousand miles of the Petchora's stream, though lying inside the boundary of Europe, cut the two characteristic tracts of the North Siberian region which runs without a break from above Archangel to Behiing Sea. On the upper river was the great Siberian forest ; while on the lower, on either bank, beyond the limit of trees, was the "tundra," which fringes the whole length of the northern coast. On the maps the tundra has a bad name. It is called the "region of treeless swamp." It is uninhabited ; and for eight months out of the twelve it is covered with snow. Yet this Mr. Seebohm found to be the unknown land which drains the Old World of half its bird-population, at the time when the temperate and tropical zones are in their most enchanting mood. For lore of "the region of treeless swamp" the birds gladly turn their backs en the English spring, and fly across Europe to sojourn in what Mr. Seebohm terms "an ornithological Cathay." He not only discovered the fact, but the still stranger reason which accounts for it ; but his story should be followed without anticipating its conclusion. At the begin- ning of April, he reached the town of Ust Zylma, three hundred miles from the mouth of the Petchora. The river was fifteen times as broad as the Thames at Hammersmith Bridge, the surface was frozen as far as the eye could reach, up stream and down stream, and the frozen forest was as "bare of life as the Desert of the Sahara." Except one or two ravens, there was not a bird to be seen. Suddenly summer came, and with it—almost on the same day—the birds arrived also. The ice on the Petchora split and disappeared, the banks steamed in the sun ; geese, swans, ducks, gulls, redstarts, wagtails, pipits, chiff-chaffs, willow-wrens, dotterels, snipes, and hawks pursuing them, arrived in forty-eight hours after the first warmth; the cuckoo sang all day long; and the Siberian forest became a paradise of beauty peopled with birds, and stocked with last year's fruits, preserved by seven months' frost and snow. But among all the migrating myriads, not one of the species whose nest he sought passed over the upper Petchora. Mr. Seebohm and Mr. Harvie Brown, who had accompanied him, then descended the river, and encamped on the tundra. The tundra was, in fact, a moor, with here and there a large flat bog and abundant lakes. It was covered with moss, lichens, heath-like plants, dwarf birch, and millions of acres of cloudberries and cran- berries. As far as the eye could reach, this region stretched east and west, intersected by low ridges of tussocks, like the rind of a melon. Here they found the nests of three of the six species whose eggs were unknown. The eggs of the grey plover were found in the first day's " birdnesting " on the tundra, and the birds were identified. These plovers, which feed in the Thames marshes in autumn, thus fly to the most northern corner of Europe to rear their young. Lower down the river the eggs of Bewick's swan were also found by a fisherman, and later, the eggs of the stint, on the tundra itself. The knot and sanderling were not found breeding on the tundra ; they go further north, to Grinnell Land,—the furthest limit of human as well as of bird migration.

In summing up his observations, Mr. Seebohm declared that the number of birds which go to the Arctic regions to breed is "vast beyond conception." They go, not by thousands, but by millions, to rear their young on the tundra. Of the cause which attracts them he was equally certain. It is because nowhere in the world does Nature provide, at the same time and in the same place, "such a lavish prodigality of food." That the barren swamp of the tundra should yield a food-supply so great as to tempt birds to make journeys of thousands of miles to rear their young in a land of plenty only to be found beyond the Arctic circle seems incredible. Mr. Seebohm explained the apparent paradox. The vegetation largely consists of cranberry, clondberry, and crowberry bushes. Forced by the perpetual sunshine of the Arctic summer, these bear enormous crops of fruit. But the crop is not ripe until the middle and end of the Arctic summer, and if the fruit-eating birds had to wait until it was tipe they would starve, for, as has been already noted, they arrive on the very day of the melting of the snow. But each year the snow descends on this immense crop of ripe fruit before the birds have time to gather it. It is then preserved beneath the snow, per. fectly fresh and pure, and the melting of the snow dis- closes the bushes with the unconsumed last year's crop hanging on them, or lying ready to be eaten, on the ground. The frozen meal stretches across the breadth of Asia. It never decays, and is accessible the moment the snow melts. Ages have taught the birds that they have only to ly to the Arctic circle to find such a store of "crystallised fruits" as will last them till the bushes are once more forced into bearing by the perpetual sunlight. The same heats which free the fruits bring into being the most prolific insect life in the world, the mosquito swarms on the tundra. No European can live there without a veil after the snow melts ; the gun-barrels are black with them, and the cloud often obscures the sight. Thus the insect-eating birds have

only to open their months to fill them with mosquitoes, and the presence of swarms of tender little warblers, chiff.chaffs, pipits, and 'wagtails in this Arctic region is accounted for. Having found by his visit to the Petchora where the birds went to and why they went, Mr. Seebohm made his next expedition to the valley of Yenisei, in Asiatic Siberia. This adventure was hardly so fruitful in results as the first. It included "two shipwrecks, which were not part of the original programme," and he wintered too far north to encounter the main stream of migrating birds. But he was able to define the geographical limits of many European, Central Asian, and Chinese species, and recorded, among other observations in his second book, "Siberia in Asia," that Siberia "is a second Canada in reserve, waiting for a Euro- pean overflow." To his "Siberia in Europe" he added a chapter describing the scene at the lighthouse in Heligoland on a "migration night." He was paying a visit to Dr. Gatke, but it was written twenty years before the translation of Dr. Glitke's work appeared in England. He was awakened at 10 o'clock to find that the whole population was moving towards the lighthouse, nets in hand, to capture the birds which strayed from the main body :—

"The whole zone of light within range of the mirrors was alive with birds coming and going. Nothing else was visible in the darkness of the night but the lantern of the lighthouse, vignetted in a drifting sea of birds. From the darkness in the east, clouds of birds were continually emerging in an uninterrupted stream ; a few swerved from their course, fluttered for a moment as if dazed by the light, and then vanished with the rest in the western gloom. Occasionally one wheeled round the light- house and then passed on, and occasionally one fluttered against the glass like a moth against a lamp, tried to perch on the wire- netting, and was caught by the lighthouse man. I should be afraid to hazard a guess as to the hundreds of thousands that must have passed in a couple of hours ; but the stray birds which the lighthouse man succeeded in securing amounted to nearly three hundred. The scene from the balcony of the light- house was equally interesting ; in every direction the birds were flying like a swarm of bees !"

This is the locus classicus of the literature of bird-migration. Yet the writer was a Yorkshire "iron-master," who was

equally interested, as we learn from one of his notes, when discussing with a "Sheffield grinder well up in dogs and fancy-pigeons," the identity of a flock of wax-wings in a suburban garden in the capital of Hallamshire.