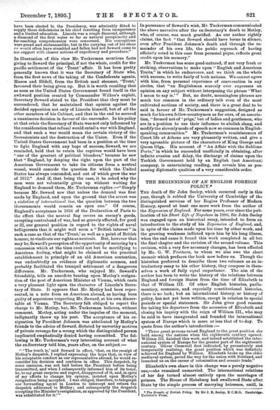 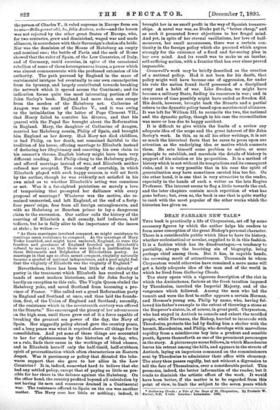 THE death of Sir John Seeley, which occurred early in this year, though it robbed the University of Cambridge of the distinguished services of her Regius Professor of Modern History, spared at least one more work from the author of the Expansion of England. For some years, ever since the pub- lication of his Short Infe of Napoleon in 1886, Sir John Seeley was engaged upon an historical essay, intended to form an introduction to the study of his Expansion of England, and,

in spite of the claims made upon his time by other work, and the growing weakness inflicted upon him by his long illness, when the end came it found this work completed in all but the final chapter and the revision of the second volume. This revision, with a very few necessary changes, has been effected by Mr. G. W. Prothero, to whom we also owe the short memoir which prefaces the book now before us. Though the historian preferred to describe these two volumes as an in- troductory essay to his other history, they compose in them-

selves a work of fully equal importance. The aim of the author has been to write the history of the relations between England and foreign States from the time of Elizabeth to

that of William III. Of other English histories, parlia- mentary, economic, and especially constitutional histories, there is no lack ; but an international history, or history of policy, has not yet been written, except in relation to special periods or special statesmen. Sir John gives good reasons for taking his departure from the accession of Elizabeth and closing his inquiry with the reign of William III., who may be said to have inaugurated and founded the international system of Europe which is more or less that of to-day. To quote from the author's introduction :—

" Three great persons raised England to the great position she held among the nations when the eighteenth century opened. William III. finished this work, and indeed established the inter- national system of Europe for the greater part of the eighteenth century. Oliver Cromwell first indicated, by prematurely and temporarily realising, the great position which was definitely achieved for England by William. Elizabeth broke up the older medimval system, paved the way for the union with Scotland, and launched us on the career of colonisation and oceanic trade."

Elizabeth's own share in this change was a purely negative one,—she remained unmarried. The international relations

of her day turned almost entirely upon the marriages of princes. The House of Habsburg had swallowed State after State by the simple process of marrying heiresses, until, in • Th. Growth of British Policy. By Sir J. H. Seeley. C.M.G. Cambridge: University Press. the person of Charles V., it ruled supreme in Europe from sea to sea—Bella gerant alii, tzt, felix Austria, nube—and the lesson

was not rejected by the other great States of Europe, who, for two centuries, grew and diminished, waged war and made alliances, in accordance with their Sovereign's choice of a bride. Nor was the dominion of the House of Habsburg an empty and nominal one ; the battle of Pavia and the sack of Rome showed that the ruler of Spain, of the Low Countries, of Italy, and of Germany, could exercise, in spite of the occasional rebellion of some of these heterogeneous States, a power which was almost commensurate with the professed extension of his authority. The path pursued by England in the maze of matrimonial intrigue led eventually to our own emancipation from its tyranny, and largely contributed towards breaking the network which it spread across the Continent ; and its indication forms quite the most interesting portion of Sir John Seeley's book. England had more than one escape from the meshes of the Habsburg net. Catherine of Aragon was the aunt of Charles V., and it was owing to the intimidation by the latter of Pope Clement VII., that Henry failed to contrive his divorce, and that his quarrel with the Papal See brought about the Reformation in England. Mary, the daughter of Catharine of Aragon, married her Habsburg cousin, Philip of Spain, and brought him England as her dowry. Had Mary not died childless, or had Philip, on her death, not remained faithful to the tradition of his house, offering marriage to Elizabeth instead of declaring her illegitimacy and asserting his own claim to his consort's throne, English history might have been very different reading. But Philip clung to the Habsburg policy, and offered marriage instead of war, and Elizabeth neither refused nor accepted. The comedy of courtship, in which Elizabeth played with such happy success, is well set forth by the author, though he was evidently not satisfied in his own mind as to whether Elizabeth's acting was conscious or not. Was it a far-sighted patriotism or merely a love of temporising that prompted her dalliance with every proposal of marriage ? Whatever was the motive, she re- mained unmarried, and left England, at the end of a forty- four years' reign, free from all foreign entanglements, and with no Habsburg or Bourbon prince to lay a dangerous claim to the succession. Our author calls the history of the courting of Elizabeth a dull comedy, half ludicrous, half tedious, but he is fully alive to the importance of the issues at stake ; he writes :—

"As these marriages involved conquest. so might resistance to marriage mean resistance to conquest. As the marriage of Mary Tudor humbled, and might have enslaved, England, so were the freedom and greatness of England founded upon Elizabeth's refusal to marry ; so that there was indeed a justification for these Britomarts and Belphcebes of Elizabethan poetry. As marriage in that age so often meant conquest, virginity naturally became a symbol of national independence, and a poet might feel that the virginity of Elizabeth was the virginity of England."

Nevertheless, there has been but little of the chivalry of poetry in the treatment which Elizabeth has received at the hands of most modern historians, and Sir John Seeley is hardly an exception to this rule. The Virgin Queen eluded the Habsburg yoke, and saved Scotland from becoming a pro- vince of France. "She called out a great Reformation party in England and Scotland at once, and thus laid the founda- tion, first, of the Union of England and Scotland; secondly, of the resistance which in the seventeenth century was offered to the Stuarts." She encouraged the piracy of her adventurers on the high seas, until there grew out of it a force capable of breaking the greatest sea power of the day, the Navy of Spain. Her niggardly policy abroad gave the country peace, and a long peace was what it required above all things for its consolidation. And yet none of these things are accounted to her for righteousness by the historian of to-day, who, as a rule, finds their cause in the workings of blind chance, and in Elizabeth herself only the half-timid, half-stubborn spirit of procrastination which often characterises an Eastern despot. Was it parsimony or policy that dictated the luke- warm support that she gave to her allies in the Low Countries? It is, indeed, somewhat hard to believe that she had any settled policy, except that of paying as little as pos- sible for her share in the defence against the Habsburg. On the other hand, the country profited beyond all calculation by not having its men and resources drained in a Continental war. The resistance offered to Spain on the sea was another matter. The Navy cost her little or nothing ; indeed, it brought her in no small profit in the way of Spanish treasure- ships. A naval war was, as Drake put it, "better cheap," and as such it presented fewer objections to her frugal mind. And yet, in spite of her eternal vacillations, her love of half- measures, her small meannesses, there was a certain con- tinuity in the foreign policy which she pursued which argues strongly for the existence of a fixed and far-seeing plan in her own mind. And its result was to make us an insular, self-sufficing nation, with a frontier that has ever since proved impassable.

Cromwell's work may be briefly described as the creation of a national policy. Had it not been for his death, that policy might well have become one of aggression, for under his rule the nation found itself possessed of a disciplined army and a habit of war. Like Sweden, we might have become a military State, finding its resources in war ; and in the course of time possibly might have ended as Sweden did. His death, however, brought back the Stuarts and a partial return to the dynastic policy based upon matrimonial alliances. It was left for William III. to reconcile the two, the national and the dynastic policy, though in his case the reconciliation was more or less due to happy accident.

It is difficult to give within the limits of a review any adequate idea of the scope and the great interest of Sir John Seeley's work. In this, as in all his other writings, it is not so much the historical facts that he cares to press upon our attention as the underlying idea or motive which connects them. He sets himself some problem to solve, or some principle to establish, and marshals the details of history in support of his solution or his proposition. It is a method of history which is not without its temptations audits consequent risks, and it is very possible that in his case the spirit of generalisation may have sometimes carried him too far. On the other hand, it is one that is very attractive to the reader, especially in the hands of such a writer as the late Regius Professor. The interest seems to flag a little towards the end, and the later chapters contain much repetition of what has gone before ; but, even so, the book is one that is quite worthy to rank with the most popular of the other works which the historian has given us.