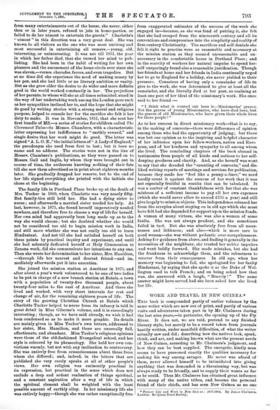 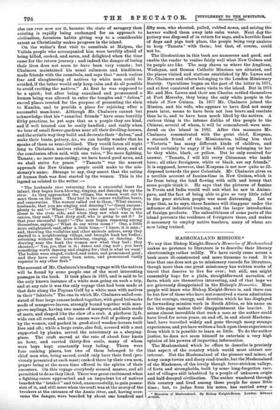 WORK AND TRAVEL IN NEW GUINEA.* Tins book is compounded

partly of earlier volumes by the same writer which are now out of print, and partly of various visits and adventures taken part in by Mr. Chalmers during the last nine years,—in particular, the opening up of the Fly River. It does not, we are told, pretend to any finished literary style, but merely to be a record taken from journals hastily written, under manifold difficulties, of what the writer actually saw and did ; describing how the natives look, speak, think, and act, and making known what are the present needs of New Guinea, according to Mr. Chalmers's judgment, and how they can be best supplied. The energetic, kindly man seems to have possessed exactly the qualities necessary for making his way among savages. He never was afraid of them, never allowed himself to be intimidated into giving anything that was demanded in a threatening way, but was always ready to be friendly, and to supply their wants as far as he could. Thus Mr. Chalmers has obtained great influence with many of the native tribes, and become the personal friend of their chiefs, and has seen New Guinea as no one

else can ever now see it, because the state of savagery then existing is rapidly being exchanged for an approach to civilisation, ferocious habits giving way to a considerable extent as Christianity makes progress in the island.

On the writer's first visit to cannibals at Maipna, the Vailala people who accompanied him were terribly afraid of being killed, cooked, and eaten, and delighted when the time came for the return journey ; and indeed the danger of losing their lives does not seem to have been very remote ; but Chalmers maintained his usual calmness and kindliness, made friends with the cannibals, and says that "much useless fear and slaughtering of natives by white men could be avoided, if the latter would only keep calm and do all possible to avoid exciting the natives." At first he was supposed to be a spirit; but after being examined and pronounced a human being was allowed to enter the temples and "dahlia," sacred places erected for the purpose of presenting the slain to Kanibu, and to provide a place for rejoicing after a successful man-hunt. Although Mr. Chalmers cannot but acknowledge that his "cannibal friends" have some horribly filthy practices, he yet says that as a people they are kind, and if well treated can be easily handled ; and really when we hear of small flower-gardens near all their dwelling-houses, and the artistic way they build and decorate their" dubus," and make their boats, pottery, &c., we can hardly wonder that he speaks of them as semi-civilised. They would listen all night long to Christian natives relating the Gospel story, and at the conclusion often said, with one voice, "No more fighting, Tamate ; no more man-eating ; we have heard good news, and we shall strive for peace." " Tamate " was the nearest approach the New Guinea people could make to the mis- sionary's name. Strange to say, they assert that the eating of human flesh was first started by the women. This is the legend as related to the writer :—

"The husbands once returning from a successful hunt far inland, they began horn-blowing, singing, and dancing far up the river. As they approached the village, the women went out to meet them on the bank. They had in the canoes wallabies, boars, and cassowaries. The women called out to them, 'What success,

husbands, that you are singing and dancing ? Great success ;

closer to the river side, and when they saw what was in the canoes, they said, That dirty stuff, who is going to eat it ? Is that your successful hunt ? '—The men began reasoning among themselves, saying,—' What do our wives mean ?' One, a little more enlightened, said, after a little time,—' I know, it is man ;' and, throwing the wallabies and other animals ashore, away they started to a neighbouring village, and brought back ten bodies ; returning without the horn-blowing, singing, or dancing. On drawing near the bank the women saw what they had ; they shouted,—' Yes, yes, that is it ; dance and sing now ; you have something worth dancing and singing for ; that is what we want.' The bodies were singed, cooked, and eaten, and pronounced good ; and they have ever since been eaten, and pronounced vastly superior to any other flesh."

The account of Mr. Chalmers's trading voyage with the natives will be found by some people one of the most interesting

passages in the book. It took place in 1883, and is said to be the only known instance of a white man going on such a trip,

and at any rate it was the only voyage that had been made at that date along the Papuan Gulf by a white man with natives in their "lakatois." The one in which Mr. Chalmers sailed con- sisted of four large canoes lashed together, with good bulwarks made of mangrove-leaves, strongly bound together with man- grove-saplings, having two masts of mangrove, and sails made of mats, and shaped like the claw of a crab. A platform 21 ft. wide ran all round, and the canoes were full of pottery made by the women, and packed in good-sized wooden-houses built fore and aft; while a large crate, also full, covered with a mat supported by planks, served the missionary as a sleeping- place. The craft moved at the rate of about four knots an hour, and carried thirty-five souls, many of whom were boys kept constantly busy baling. There were four cooking places, but two of them belonged to the chief men who, being sacred, could only have their food (pre- viously presented at each mast) cooked there by their own men, prayer being at the same time offered to the spirits of their ancestors. On this voyage everybody seemed master, and all permitted to do as they liked. There was great excitement when a fighting-canoe approached and an impudent lot of natives boarded the " latakoi " and tried, unsuccessfully, to gain posses- sion of it, and still more when the craft was at the mercy of the breakers at the entrance of the Annie river, and, having over- come the danger, were boarded by about one hundred and fifty men, who shouted, yelled, rubbed noses, and seizing the hawser walked them away into calm water. Next day the pottery was disposed of in return for sago, and a horrible feast of dogs and pigs took place, the people being very anxious to keep Tamate ' with them; but that, of course, could not be.

The illustrations in this book are numerous and good, and enable the reader to realise fairly well what New Guinea and its people are like. The map shows us where the Anglican, Wesleyan, and Roman Catholic Missions are situated, and the places visited and stations established by Mr. Lawes and Mr. Chalmers and others belonging to the London Missionary Society. Operations began on the part of the latter in 1871, and at first consisted of mere visits to the island. But in 1874 Mr. and Mrs. Lawes and their son Charles settled themselves at Port Moresby, they being the only white people in the whole of New Guinea. In 1877 Mr. Chalmers joined the Mission, and his wife, who appears to have died not many years later, seems to have been not less brave and resolute than be is, and to have been much liked by the natives. A curious thing is the intense dislike of this people to the Chinese, several of whom, it will be remembered, were mur- dered on the island in 1882. After this massacre Mr. Chalmers remonstrated with the great chief, Koapena, a staunch friend of the Missionaries, telling him that " Victoria " has many different kinds of children, and would certainly be angry if he killed any belonging to her be they white, black, or yellow. But he only received for answer, " Tamate, I will kill every Chinaman who lands here ; all other foreigners, white or black, are my friends." It is supposed, however, that Koapena is not now quite so in- disposed towards the poor Celestials. Mr. Chalmers gives us a terrible account of famine-time in New Guinea, which is far from being the land flowing with milk and honey that some people think it. He says that the pictures of famine in Persia and India would well suit what he saw in Anima- parr], and the fact of being able to give so very little relief to the poor stricken people was most distressing. Let us hope that, as he says, these famines will disappear under the influence of industrial training, and the larger introduction of foreign products. The unhealthiness of some parts of the island prevents the residence of foreigners there, and makes it necessary to employ native teachers, many of whom are now being trained.