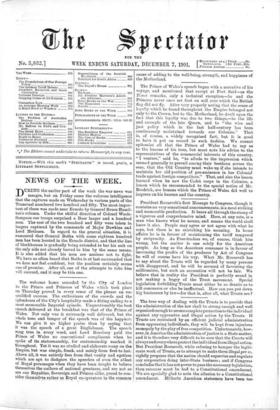 Page 1, 7 December 1901 — President Roosevelt's first Message to Congress, though it contains no
Close

President Roosevelt's first Message to Congress, though it contains no

very sensational announcements, is a most striking and memorable production. It bears all through the stamp of a vigorous and comprehensive mind. Here, at any rate, is a man who knows what he means, and means the world shall know it also. People may agree or not agree with what he says, but there is no mistaking his meaning. In home affairs he is in favour of maintaining the tariff tempered by reciprocity. As Free-traders we, of course, think him wrong, but the matter is one solely for the American people. As long as the American consumer is in favour of increasing the profits of the producer by Act of Congress he will of course have his way. What Mr. Roosevelt has to say about the Trusts will be regarded by many persons with disapproval, and he will be accused of favouring the millionaires, but such an accusation will not be fair. We believe that in reality the President is perfectly sound in not making a bogey of the Trust movement. Special legislation forbidding Trusts must either be so drastic as to kill commerce or else be ineffectuaL How can you put down big businesses by law—for that is, after all, what Trusts are?