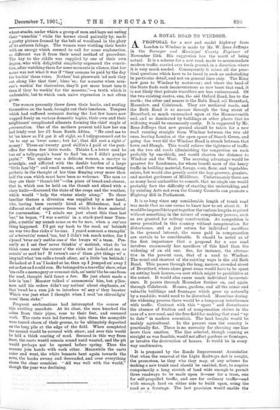 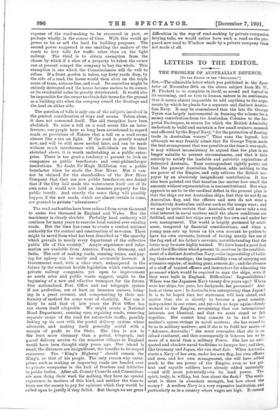 A ROYAL ROAD TO WINDSOR.

A PROPOSAL for a new and model highway from BILL London to Windsor is made by Mr. W. Rees Jeffreys in the Surveyor and Municipal County Engineer of November 15th. His suggestion has the merit of being actual. It is a scheme for a new road, made to accommodate modern traffic, carried over fresh ground, in a direction where it is very much needed. Consequently it raises all the prac- tical questions which have to be faced in such an undertaking in particular detail, and not on general lines only. The King now goes to Windsor by motor-car; and where the head of. the State finds such inconveniences as now beset that road, it is not likely that private travellers are less embarrassed. Of the two existing routes, one, the old Orford Road, lies to the north ; the other and nearer is the Bath Road, vid Brentford, Hounslow, and Colnbrook. They are medireval roads, and the Bath Road is so narrow through the long street of Brentford, so much encroached upon at the Hammersmith end, and so dominated by buildings at other places that its widening would be enormously costly. It is suggested by Mr, Itees Jeffrey's that new ground. should be taken for a new road running straight from Windsor between the two old ones, leaving London at the open space of Starch Green, and going due west till the Windsor Road is struck between that town and Slough. This would relieve the tightness of traffic on the two old roads (diminishing the congestion on each probably by one-third), and would shorten the distance to Windsor and the West. The accruing advantage would be greatest for Londoners, for whose benefit most of the heavy traffic in building material, forage, corn, flour, and vegetables exists, but would also greatly assist the hay-growers, graziers, and market gardeners of Middlesex. Unfortunately there are so many local authorities to consult, that no single one would probably face the difficulty of starting the undertaking, and by existing Acts not even the County Councils can promote a Highway Bill in Parliament.

It is so long since any considerable length of trunk road was made that no one seems to know how to set about it. It would be impossible to put together the various lengths required without something in the nature of compulsory powers, such as are granted for railway construction. As compulsion is never permitted in this country without compensation for disturbance, and a just return for' individual sacrifices in the general interest, the sums paid in compensation are certain to be considerable. It should be noted as of the first importance that a proposal for a new road involves enormously less sacrifices of this kind than the widening of an old one. See, for instance, the alterna- tive in the present case, that of a road to Windsor. The usual and shortest of the existing ways is the old Bath Road. This passes through the long, narrow, crowded street of Brentford, where alone great sums would have to be spent on setting back houses,—a cost which might be prohibitive at the outset. It would also cause much individual inconveni- ence. It passes ,through Hounslow further on, and again through Colnbrook. Houses, gardens. and all the minor and valuable buildings and frontages which grow up naturally by a roadside, would need to be disturbed. Meantime during the widening process there would be a temporary interference with traffic. Contrast with this " upset " and disturbance the absence of friction and of compensation claims in the case of a new road, and the free field for making that road "up to date" in modern essentials. The land bought would be mainly agricultural. In the present case the country is practically flat. There is no necessity for choosing one line more than another. The line selected, though running as straight as was feasible, would not affect gardens or frontages, or involve the destruction of houses. It would be in every way unobtrusive.

It is proposed by the Roads Improvement Associatior that -when the renewal of the Light Railways Act is sought, the promoters, be they who they may, of any scheme for making a new trunk road should be enabled, first, to acquire compulsorily, a long stretch of land wide enough to permit three roadways to be made upon it—one for a tram, one for self-propelled traffic, and one for ordinary traffic—and with enough land on either side to build upon, using the read as a frontage. The last provision would enable the The road authorities have been reduced from seven thousand to under two thousand in England and Wales. But the machinery is clearly obsolete. Probably local authority will continue for many years to exercise local control over existing roads. But the time has come to create a central national authority for the control and construction of new ones. These might be saved from what has been described as "the anarchy which prevails in nearly every department of the collective public life of this country." Ample experience ar.d infor- mation are available from America, Prance, Germany, and India. The cost of making roads, running trams, and pay- ing for upkeep can be easily and accurately forecast. A Government road, with a clear start, unhampered in the future by the constant hostile legislation which embarrasses private railway companies, yet open to improvement as needs arise and public wants suggest, might be the beginning of a new and effective transport for the future. Our nationalised Post Office and our telegraph system if not perfection, are at least an immense success, bring- ing in a great revenue, and compensating by their uni- formity of method for some want of elasticity. Nor can it fairly be said that of late years the Post Office has not shown itself adaptable. We might create a National Road Department, running cars, repairing roads, reserving separate strips of the road for automobile traffic, possibly linking up its cars with the postal delivery system where advisable, and making itself generally useful with a margin of profit to the State. The idea. is not _ in the least more visionary than a postal, telegraph, and parcel delivery service to the remotest villages in England would have been thought sixty years ago. Our island is small, the distances are insignificant, the benefits to be reaped enormous. The "King's Highway" should remain the King's, or that of his people. The only reason why enter- prises such as making or improving roads are handed over to private companies is the lack of freedom and initiative in public bodies. After all, County Councils and Committees are men doing their work for nothing, they have no special experience in matters of this kind, and neither the time to learn nor the money to pay for opinions which they would be ealled upon to justify if they failed. But though we see great expense of the road-making to be recovered in part, or perhaps wholly, in the course of time. With this would go power to let or sell the land for building purposes. The second power suggested is One enabling the makers of the roads to levy tolls for traffic other than on the light railway. The third is to obtain exemption from the clause by which if a slice of a property be taken the owner can at present compel the company to 'buy the whole. This exemption is one which the Commissioners will do well to refuse. If a front garden is taken, say forty yards deep, by the side of a road, the house would then abut on the triple route of tram, autocar-line, and road. Its amenities might be entirely destroyed and the house become useless to its owner, or its residential value be greatly deteriorated. It would also be impossible for the owner to obtain fair terms for the ground as a building site when the company owned the frontage and the land on either side.

The question of tolls is only one of the subjects involved in the general consideration of ways and means. Taken alone, it does not commend itself. The old turnpikes have been abolished. To raise a toll on a road seems like an inter- ference; our people have so long been accustomed to regard roads as provisions of Nature that a toll on a road seems almost like a tax on light. If the road is greatly wanted now, and will be still more needed later, and can be made without much interference with individuals on the lines sketched above, it is worth undertaking as a public enter- prise. There is too great a tendency at present to look on companies as public benefactors and semi-philanthropic institutions. No doubt Sir Hugh Middleton was a public benefactor when he made the New River. But it can- not be claimed for the shareholders of the New River

Company that they are now public benefactors, nor denied that if the City had made the watercourse itself out of its own rates it would now bold an immense property for the public benefit. And exactly the same thing will possibly happen if the new roads, which are almost certain to come, are granted to private "adventurers."

difficulties in the way of road-making by private companies levying tolls, we would rather have such a road as the pro- posed new road to Windsor made by a private company than not made at all.