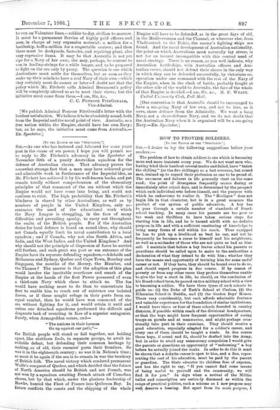 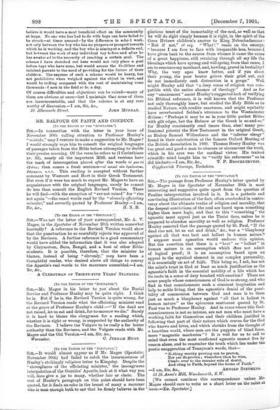 HOW TO PROVIDE SOLDIERS.

[TO THE EDITOR OF TER "SPECTATOR.")

SIE,—I desire to lay the following suggestions before your readers :— The problem of how to obtain soldiers is one which is becoming more and more insistent every year. We do not want men who, having tried their hands at several trades and failed, have "taken the shilling" (or the five shillings) as a last resource, but sound men, trained up to regard their profession as one to be proud of. The successes and failures in life generally start on the same road ; the point of divergence frequently occurs during or immediately after school days, and is determined by the prospect which each individual sets before himself, and the purpose with which he endeavours to realise it. The " Hooligan " does not begin life in that character, but is in a great measure the product of our system of public education. A boy has to pass through a certain number of standards of Board- school teaching. In many cases his parents are too poor or to) weak and thriftless to have taken serious steps for starting him in life, and he is turned adrift with no definite purpose in life and with a sufficient smattering of knowledge to bring many forms of evil within his reach. Thus equipped he has to pick up a livelihood as best he can, and not in- frequently he becomes a curse to himself and his neighbours, as well as a misleader of those who are not quite as bad as him- self. I maintain that before a boy leaves school his parents or guardians should be called upon to make to the authorities a declaration of what they intend to do with him; whether they have the means and opportunity of training him for some useful career or not. If they have, they should be bound over to do so, and should report progress in due course. If by reason of poverty or from any other cause they, profess themselves unable to give the boy a start in life, he should, on the conclusion of his Board-school term, be passed on to a military school with a view to becoming a soldier. We have three types of such schools to guide us : (1) the Duke of York's School at Chelsea, (2) the Hibernian School in Dublin, and (3) the Gordon Boys' Homes. These vary considerably, but each affords admirable features and valuable experience for the foundation of similar institutions. I would have three or four of these schools founded in country districts, if possible within reach of the divisional headquarters, so that the boys might have frequent opportunities of seeing troops on parade and at manceuvres, and might perhaps occa- sionally take part in their exercises. They should receive a good education, especially adapted for a soldier's career, and every one of them should be taught a trade. In due course these boys, if sound and fit, should be drafted into the ,Army, but in order to avoid any unnecessary compulsion I would give the parents or guardians an opportunity of " redeeming " a boy before he actually joined the ranks. In order to do this it must be shown that a definite career is open to him, and a fine, repre- senting the cost of his education, must be paid by the parent or guardian. The State educates its children free of expense, and has the right to say, "If you cannot find some means of being useful to yourself and the community, we will find it for you." In days when a revival of the Militia ballot and conscription are seriously discussed as within the range of practical politics, such a scheme as I now propose may vilA deserve a hearing. But apart from its main purpose, I believe it would have a most beneficial effect on the community at large. No one who has had to do with boys can have faded to be struck—at times amazed—by the difference in seho,l work, not only between the boy who has no purpose or prospect towards which he is working, and the boy who is aiming at a definite end, but between the work of any individual boy be-fore and after he has awake, ea to the necessity of reaching a certain goal. The scheme I have sketched out here would not only place a goal before boys who have none, but would arouse the thaftless arid indolent parents to the need of providing for the future of their children. The expense of such a scheme would be heavy, but not prohibitive when weighed against the object in view, and. -would be trifling compared with the cost of maintaining some thousands f men in the field at fls. a day.

Of course difficulties and objections can be raised—many of them are obvious at once—but I maintain that none of them are. insurmountable, and that the scheme is at any rate worthy of discussion.—I am, Sir, &c.,