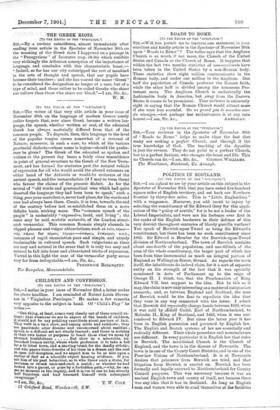 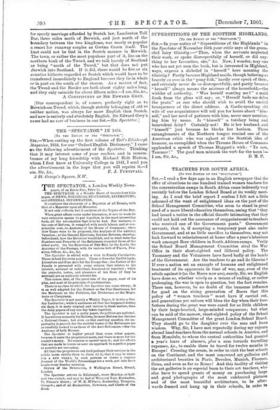 [To Tug EDITOR OF THE "SPEcTATon:1 am aghast to see by your article on this subject in the Spectator of November 31,Ith that you have ceded five hundred square miles of English territory, and set back our Northern frontier by thirty-five miles. This is "Little Englandism." with a vengeance. Moreover, you add insult to injury by selecling the constituency of Sir Edward Grey for this appli- cation of the "policy of scuttle," for is he not a leader of the Liberal Imperialists, and were not his forbears ever first in the ranks of the English borderers in their defence of this very district throughout centuries of bloody guerilla warfare? You speak of Berwick-upon-Tweed as being Sir Edward's constituency, but there has been no such constituency since 1885. Sir Edward is Member for the Berwick-upon-Tweed division of Northumberland. The town of Berwick contains about one-fourth of the population, and one-fiftieth of the area of the whole constituency, the larger part of which has been from time immemorial as much an integral portion of England as Wellington Street; Strand. As regards the town itself, the inhabitants do indeed claim for it a sort of separate entity on the strength of the fact that it was specially mentioned in Acts of Parliament up to the reign of George IL I think, too, that the Proclamation of King Edward VII. lent support to the idea. But be this as it may, the claim is now only interesting as a matter of antiquarian research; and, as between England and Scotland, the men of Berwick would be the first to repudiate the idea that they were in any way connected with the latter. I admit that Berwick did repeatedly change hands between 1020, when it was sold by ..Edulf Cudel, Earl of Northumberland, to Malcolm IL, King of Scotland, and 1482, when it was sur- rendered to Edward IV. But since the latter year it has been in English possession and governed by English law. The English and Scotch systems of law are essentially and radically different. Their whole procedure and nomenclature are different. In every particular it is English law that rules in Berwick. The established Church is the Church of England, and the town is in the diocese of Newcastle. The town is in one of the County Court Districts, and in one of the Poor-law Unions of Northumberland. It is at Newcastle Assizes that prisoners from Berwick are tried, and that litigation from Berwick is carried on. Berwick has been formally and legally annexed to Northumberland for County Council purposes. This was necessary because it was an ancient English town and county of itself, not because there was any idea that it was in Scotland.. As long as English men wad women wero able to avail tlienzeelves a the facilities for speedy marriage afforded by Scotch law, Lamberton Toll Bar, three Miles north of Berwick, and just north of the boundary between the two kingdoms, was nearly as popular a resort for runaway couples as Gretna Green itself. The knot could not be tied in the Scotch manner in Berwick. The town, or rather the most populous part of it, lies on the northern bank of the Tweed, and we talk loosely of Scotland as being "north of the Tweed," but that does not put Berwick into Scotland. If it did, there would be five or six counties hitherto regarded as Scotch which would have to be transferred immediately to England because they lie in whole or in part on the south of the stream. As a matter of fact, the Tweed and the Border are both about eighty miles long, and they only coincide for about fifteen miles.—I am, Sir, &c., A CONSTITUENT OF SIR EDWARD GREY.

[Our correspondent is, of course, perfectly right as to Berwick-on-Tweed, which, though strictly belonging of old to neither nation, was always far more English than Scotch, and now is entirely and absolutely English. Sir Edward Grey's name had no sort of business in our list.—En. Spectator.]