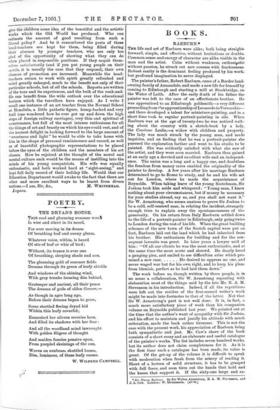 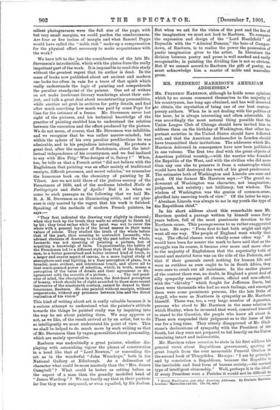 RA_EB1TRN.* TEE life and art of Raeburn were alike; both being straight. forward, simple, and effective, without hesitations or doubts. Common-sense and energy of character are alike visible in the man and the artist. Calm without weakness, enthusiptic without passion, he struck out new courses with fearlessness. Robust sanity is the dominant feeling produced by his work, but profound imagination he never displayed.

The painter's father, Robert Raeburn, came of a Borderland. owning family of Annandale, and made anew life for himself by coming to Edinburgh and starting a mill at Stockbridge, on the Water of Leith. After the early (bath of his father the painter was left to the care of an affectionate brother. He was apprenticed to an Edinburgh goldsmith—a very different ..proceeding from the apprenticeship of Leonardo toVerrocchio- and there developed a talent for miniature-painting, and in a short time took to regular portrait-painting in oils. When Raeburn was- at the age of twenty-two he was noticed walk- ing about the country with a sketch-book by a lady, the Ccmttesse Leslie,—a widow with children and property. The lady was much struck by the young man, and made inquiries, and on finding that he was a portrait-painter she pursued the exploration farther and went to his studio to be painted. She was evidently satisfied with what she saw of the artist, and they were soon married. Raeburn thus gained at an early age a devoted and excellent wife and an independ- ence. The union was a long and a happy one, and doubtless the freedom from money cares enabled the originality of the painter to develop. A few years after his marriage Raeburn determined to go to Rome to study, and he and his wife set out for London, where he made the acquaintance of Reynolds. When taking leave of the young Scotchman, Sir Joshua took him aside and whispered : "Young man, I know nothing about your circumstances, but if money be necessary for your studies abroad, say so, and you shall not want it." Sir W. Armstrong, who seems anxious to prove Sir Joshua to be a cold, self-centred man, in relating the incident, strangely enough tries to explain away the spontaneousness of the generosity. On his return from Italy Raeburn settled down to the life of a portrait-painter in Edinburgh, only going twice to London during the rest of his life. When the great building schemes of the new town of the Scotch capital were put on foot, Raeburn laid out the land which be had inherited from his brother. His enthusiasm for building and for the con- sequent lawsuits was great. In later years a lawyer said of him : "Of all our clients he was the most enthusiastic, and at the same time the most acute and shrewd. He dearly loved a ganging plea, and smiled to see difficulties arise which pro-

mised a new case He desired to oppress no one, and never waged war but for his own right, and to keep his plans from blemish, perfect as he had laid them down."

The work before us, though written by three people, is in no sense a collaboration, Sir W. Armstrong repeating with elaboration most of the things said by the late Mr. R. A. M. Stevenson in his introduction. Indeed, if all the repetitions were left out the residue of the first-named writer's work might be made into footnotes to that of the latter. Not that Sir W. Armstrong's part is not well done. It is, in fact, a much more satisfactory piece of work than his companion volume on Reynolds published last year. We pointed out at the time that the author's-want of sympathy with Sir Joshua, and his effort to maintain and justify his attitude with much reiteration, made the book rather tiresome. This is not the case with the present work, his appreciation of Raeburn being both sympathetic and just. Mr. Caw's share of the book consists of a short essay and an elaborate and useful catalogue of the painter's works. The list includes seven hundred works, but its author does not claim completeness for it. As it is the first time such a catalogue has been made, its value is great. Of the get-up of the volume it is difficult to speak with moderation when fresh from the misery of reading it. Short of a lectern of solid structure, it has to be grasped with full force, and soon tires out the hands that hold and the Imees.that support it. If the sixty-one large and ex-

cellent photogravures were the fall size of the page, with but very small margins, we could pardon the cumbrousness.

Are four or five inches of margin and what Samuel Pepys would have called the "noble rich" make-up a compensation for the physical effort necessary to make acquaintance with the work P We have left to the last the consideration of the late Mr. Stevenson's introduction, which with the plates form the really important part of the work. It is impossible to read this study without the greatest regret that its author is dead. In the mass of books now published about art ancient and modern one looks too often in vain for a trace of that spirit which really understands the logic of painting and comprehends the peculiar standpoint of the painter. One set of writers on art make irrelevant literary wanderings about their sub- ject, and talk a great deal about reconstructing personalities, while another set grub in archives for petty details, and find after much searching how much was paid by some Pope for

lime for the intonaeo of a fresco. Mr. Stevenson never lost

sight of the pictures, and his technical knowledge of the practice of painting enabled him to understand the relation between the execution and the effect produced by the picture. We do not mean, of course, that Mr. Stevenson was infallible, and we recognise that he was rather narrow-minded; but within the sphere of his own peculiar predilections he was admirable, and in his prejudices interesting. He protests a great deal, after the manner of Scotchmen, about the intel- lectual independence of his countrymen, and we feel inclined to say with Mrs Prig," Who deniges of it, Sairey ? " When, too, he tells us that a French artist "did not believe with the Englishman that painting was an affair mainly of traditional receipts, difficult processes, and secret vehicles," we remember

the humorous book on the chemistry of painting by M. Vibert. Are we not told there of the jealous secrecy of the Frenchmen of 1830, and of the mediums labelled Mule de Perlinpinpin and Balm of Apollo? But it is when we come to such passages as the following that we hail Mr.

R. A. M. Stevenson as an illuminating critic, and our plea- sure is only marred by the regret that his work is finished. Speaking of the methods of modern French painters, he says They first indicated the drawing very slightly in charcoal; when they took up the brush they made no attempt to finish bit by bit; they tried rather while the paint was wet to cover the whole with a general lay-in of the broad masses in their main values of colour. They studied the truth of the whole before that of the part, thus seeming to contradict Leonardo, who advised students of drawing to study the part before the whole. Leonardo was not speaking of painting a picture, but of acquiring a knowledge of facts. Unquestionably, the habits of the Frenchmen led to a different style from that of the English- men, to a better generalised and better ordered kind of truth, to a larger and suaver aspect of canvas, to a more logical study of atmosphere and real lighting, to a finer perception of plane, to a broader, more evident, and intentional touch, and above all to that much-praised power of selection, which, in truth, means a perception of the value of details and their agreement or dis- agreement with the ensemble of a picture The ind.pend- ence of mind, the absorption in nature, the first-hand perception of beauty, which should be of right accorded to these more recent innovators of the nineteenth century, cannot be denied to their forerunner, Raeburn. He also painted without receipts, without preparations, without any processes between him and the direct realisation of his vision."

This kind of writing about art is really valuable because it is a serious attempt to understand what the painter's attitude towards the things he painted really was by inquiring into the way he set about painting them. We may approve or not, as we like, of the result arrived at by an artist, but to do so intelligently we must understand his point of view. This we shall be helped to do much more by such writing as that of Mr. Stevenson than by vague generalities about personality, which are mainly speculative.

Raeburn was undoubtedly a great painter, whether dis- playing with astonishing vigour the planes of construction in a head like that of "Lord Newton," or concealing the art as in the wonderful "John Wauchope," both in the National Gallery at Edinburgh. As a delineation of character what could be more masterly than the "Mrs. James Campbell" ? What could be better as setting before us the aspect of a man than the grandly modelled head of " James Wardrop "P We can hardly say that in their particu- lar line they were surpassed, or even equalled, by Sir Joshua. But when we ask for the vision of the poet and the fire of the imagination we must not look to Raeburn. To compare the expression and design of the "Lord Heathfield " of Reynolds with the "Admiral Duncan," the hero of Camp. down, of Raeburn, is to realise the power the possession of poetic imagination gives to the artist. In literature the division between poetry and prose is well marked and easily recognisable; in painting the dividing line is not so obvious. But if we cannot accord to Raeburn the gift of poetry, we must acknowledge him a master of noble and masculine prose.