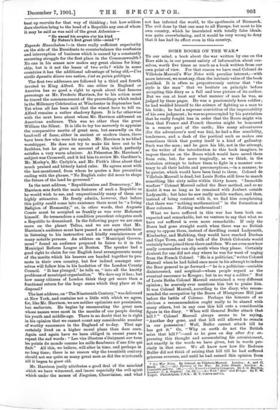 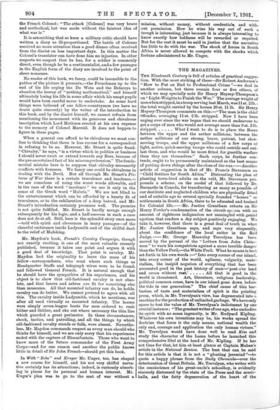 SOME BOOKS ON THE WAR.* To our mind, a book

about the war written by one on the Boer side is, in our present satiety of information about our- selves, worth five times as much as a book written from our own point of view. For that reason we have read Colonel de Villebois-Mareuil's War Notes with peculiar interest,—with

more interest, we must say, than the intrinsic value of the book justified. It is often so preposterously untrue that "the style is the man" that we hesitate on principle before accepting this diary as a full and true picture of its author. But we can at least say what manner of man he was, as judged by these pages. He was a passionately keen soldier; he had wedded himself to the science of fighting as a man to his bride ; he had a supreme conviction of the impeccability of his own judgment ; he was so preoccupied by his patriotism that he really fought less in order that the Boers might win than that France and French theories might be honoured in a remote part of the earth; like many adventurers (for the adventurer's soul was his), he had a fine sensibility, tenderness, and a dash of the poetical such as makes one sometimes think that poetry itself is a kind of gallantry. Such was the man; and he gave his life, not in the attempt, as the writer of the introduction to this book imagines, to impose theories on the Boers which would have saved them from ruin, but, far more tragically, as we think, in the mistaken attempt to induce them to fight in a manner con- trary to all their habits and preconceptions,—in a manner, to be precise, which would have been fatal to them. Colonel de Villebois-Mareuil is dead, but Louis Botha still lives to march something like sixty miles within thirty hours. "Immobile warfare" Colonel Mareuil called the Boer method, and so no doubt it was so long as he remained with Joubert outside Ladysmith ; but later he saw really mobile warfare, and then, instead of being content with it, we find him complaining that there was "nothing mathematical" in the formation of Boer columns. Nothing mathematical!

What we have suffered in this war has been both un- expected and remarkable, but we venture to say that what we have not suffered is even more remarkable. If only the Boers had gone straight south when there was no British army to oppose them, instead of dawdling round Ladysmith, Kimberley, and Mafeking, they would have reached Durban and Cape Town, and the bulk of the Dutch Colonists would certainly have joined them there and then. We see even now how easily commandos can slip south when they please. Certainly Joubert for one did not stay where he was for want of urging from the French Colonel. "He is a politician," writes Colonel Mareuil when he had failed once more in his attempt to induce the Boer general to go forward—" he is a politician—amiable disinterested, and sceptical—whom people regard as the eventual successor to Kruger; but in no way a soldier." But of Louis Botha Colonel Mareuil entertained a very different opinion; he scarcely ever mentions him but to praise him. It was Colonel Mareuil, according to the diary, who recom- mended the occupation by the Boers of Hlangwane Hill just before the battle of Colenso. Perhaps the honours of so obvious a recommendation ought really to be shared with many others, but in any case this hill cuts a considerable figure in the diary. "When will General Buller attack that hill ? " Colonel Mareuil always seems to be saying, "Another day gone, and that hill still allowed to remain in our possession ! Well, Buller cannot attack till he has got it." Or, "Why on earth do not the British seize that hill ? "—and so he goes on day after day - ex pressing this thought and accumulating his astonishment, not exactly in the words we have given, but in words pre- cisely in that sense. We all know now how Sir Beavers Buller did not think of seizing that hill till he had suffered grievous reverses, and until he had earned this opinion from • (1.) War Notes. By Colonel de Villebois-Mareuil. London : A. and C. Black. [58.]—(2.) Pictures of the War. By John Stuart. London: A. Constable and CO. tee.]—(3.) Preach's Cavalry Campaign. By J. G. Maydon. London : C. A. Pearson. [3s. 6d.)—(4.) With Bobs" and Kruger. By F. W. Unger. Philadelphia, 11.8.A. : H. T. Coates and Co.

the French Colonel : "The attack [Colenso] was very brave and methodical, but was made without the faintest idea of what war is."

It is astonishing that so keen a military critic should have written a diary so ill-proportioned. The battle of Colenso received no more attention than a good dinner often received from the diarist on less important days. In this matter the Colonel's translator can have done him no injustice. In other respects we suspect that he has, for a soldier is commonly direct, even though he be a sentimentalist, and a few passages in the English form of the diary are involved to the point of sheer nonsense.

No reader of this book, we fancy, could be insensible to the pathos of the picture it presents,—the Frenchman up to the end of his life urging the De Wets and the Delareys to abandon the heresy of "nothing mathematical," and himself ultimately losing his life in some affair which his unapt pupils would have been careful never to undertake. As some hard things were believed of our fellow-countrymen (we have no doubt quite sincerely) by the writer of the introduction to this book, and by the diarist himself, we cannot refrain from mentioning the monument with its generous and chivalrous inscription which Lord Methuen erected at his own expense to the memory of Colonel Mareuil. It does not happen to figure in these pages.

When a general can afford to be chivalrous we must con- fess to thinking that there is less excuse for a correspondent in refusing to be so. However, Mr. Stuart is quite frank. "Chivalry," he says, "is a virtue which in politics or business I should never exert or extend towards any Boer, because of the pre-ascertained fact of his miscomprehension." The funda- mental mistake here is to suppose that chivalry necessarily conflicts with firmness. We fancy one could be chivalrous in dealing with the Devil. But all through Mr. Stuart's Pic- tures of War there is a certain truculence and insolence,— we are conscious of using the worst words allowable, and in the case of the word " insolence " we use it only in the sense of the Greek word "Hubris." We are not blind to the entertainment which can be afforded by a hearty fit of truculence, or to the exhilaration of a deep hatred, and Mr. Stuart's introduction certainly promises well. The promise is not quite fulfilled. Mr. Stuart is hardly savage enough subsequently for his logic, and a half-success in such a case does not do at all. Still, here is the splendid story once more —told with spirit and cleverness in many passages—of the cheerful endurance inside Ladysmith and of the skilful dash to the relief of Maieking.

Mr. Maydon's book, French's Cavalry Campaign, though not exactly exciting, is one of the most valuable recently published, because it takes one point and argues it with a good deal of knowledge. That point is cavalry. Mr. Mnydon had the originality to leave the mass of his fellow - correspondents, who went where such things as Headquarter Staffs and telegraph wires were to be found, and followed General French. It is natural enough that he should have the sympathies of his experiences, and his object is to show that old-fashioned cavalry is not obso- lete, and that lances and sabres are fit for something else than museums. All that mounted infantry can do, he holds, cavalry can do better. We cannot pretend to agree with all this. The cavalry inside Ladysmith, which he mentions, was after all used virtually as mounted infantry. The horses were simply seven-league boots for men ordered to rush hither and thither, and eke out where necessary the thin line which guarded a great perimeter. In these circumstances, shock, tactics, and patrolling, and all the things by which old-fashioned cavalry stands or falls, were absent. Neverthe- less, Mr. Maydon commands respect as every man should who thinks for himself, and we are only sorry that his experiences ended with the capture of Bloemfontein. Those who want to know more of the future commander of the First Army Corps—and for one reason and another the public knows little in detail of Sir John French—should get this book.

In With Bobs" and Kruger Mr. Unger, too, has shaped a new course for himself, and his not very skilful narra- tive certainly has its attractions; indeed, is curiously absorb- ing in places for its personal and human interest. Mr. linger's plan was to go to the seat of war without a

mission, without money, without credentials, and with- out permission. How he wins his way out of such a trough is interesting, just because it is always interesting to- know exactly how boldness will be rewarded or requited. But for the rest it must be said in justice that the narrative has little to do with the war. The shock of forces in South Africa is never allowed to compete with the shocks which fortune administered to Mr. Unger.