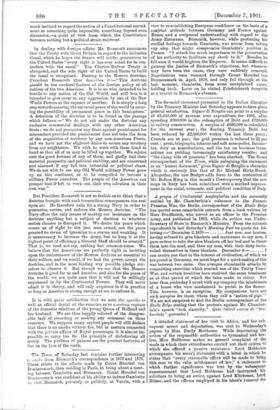 Page 2, 7 December 1901 — A propos of Continental Anglophebia and the animosity excited by
Close

A propos of Continental Anglophebia and the animosity excited by

Mr. Chamberlain's reference to the Franco. Prussian War, the -Berlin correspondent of the Eloile Beige haa.quoted some.remarkable extracts- from a book written by Herr Rindfieitch,, who served as an officer in the Prussian Army,and published in 1883, while its author was -Under- Secretary of -State. in Bismarck's Ministry. From the extracts reproduced in last Saturday's Morning Post we quote the fol.

lowing December 2,1870.— Just now, our hostess, having refused to give blankets and mattresses to my men, I gave orders to take the nice blankets off her bed and to throw theminto the mud, and then my men, with their dirty bOots, rolled -themselves in these blankets. December 6.— can assure you that in the interest of civilisation, of which we are proud in Germany, we Must hope. for a quick ending of this war between two races. One avenges abominable attacks by coMmitting atrocities which remind one of the Thirty Years' War, and certain localities have received the.same treatment as at that period of which the tales make us shiver. Not later than yesterday I saved with my company the inhabitants of a hone who were condemned to perish in the flames. This, however, is an exception. lily 'companions have not such scruples for those. whom 'they call a 'nation of pigs:" We are .not surprised to find the Berlin correspondent of the Etoile Beige stating that the protests against Mr. Chamber- lain's speech "lack sincerity." Quis , Lidera gams de "bar. boracite" guerentes ?