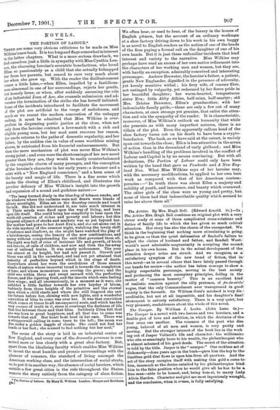 TIIE PORTION OF LABOUR.* Toss are some very obvious criticisms to be made on Miss Wilkins's new book. It is too long and flags somewhat in interest in the latter chapters. What is a more serious drawback, we find ourselves just a little in sympathy with Miss Cynthia Len- nox, the charming heroine's eccentric benefactress, who loved Ellen so passionately as a child that she actually kidnapped

her from her parents, but ceased to care very much about her when she grew up. With the reader the disillusionment comes a little later,—when Ellen, impelled by a fastidious- ness abnormal in one of her surroundings, rejects her gentle, but homely lover, or when, after suddenly assuming the role of an industrial Joan of Arc, she counsels submission and ad- vocates the termination of the strike she has herself initiated. Some of the incidents introduced to facilitate the movement of the plot are artificial to the verge of melodrama, and

much as we resent the modern convention of the unhappy ending, it must be admitted that Miss Wilkins is over-

profuse in dispensing poetic justice at the close, when not only does the heroine contract a love-match with a rich and eligible young man, but her mad aunt recovers her reason, her uncle returns to the paths of domestic regularity, and her

father, by the sudden rise in value of some worthless mining shares, is extricated from his financial embarrassments. But then the mere mechanism of plot was never Miss Wilkins's

strong point ; and even were the shortcomings of her new novel greater than they are, they would be easily counterbalanced

by the exquisite charm of many passages, and the conception of the heroine's character in her early years : a dreamer and a saint with a "New England conscience," and a keen sense of

the beauty and magic of life. There is a fine scene which marks the closing of Ellen's childhood, and illustrates the peculiar delicacy of Miss Wilkins's insight into the growth and expansion of a sound and guileless nature "The lamp burned dimly in the blue fog of tobacco smoke, and the windows where the curtains were not drawn were blanks of silvery moonlight. Ellen sat on the doorstep outside and heard the talk. She did not understand it, nor take much interest in Their minds were fixed upon the way of living, and hers upon life itself. She could bring her simplicity to bear upon the world-old question of riches and poverty and labour; but this temporal adjunct of stocks and markets was as yet beyond her. Her mother had gone to her Aunt Eva's, and she sat alone out in the wide mystery of the summer night, watching the lovely shift of radiance and shadows, as she might have watched the play of a kaleidoscope, seeing the beauty of the new combinations, and seeing without comprehending the unit that governed them all. The night was full of cries of insistent life and growth, of birds and insects, of calls of children, and now and then the far-away roar of railroad trains. It was nearly midsummer. The year was almost at its height, but had not passed it. Growth and bloom was still in the ascendant, and had not yet attained that maturity of perfection beyond which is the slope of death. Everywhere about her were the revolutions of those unseen wheels of nature whose immortal trend is towards the completion of time, and whose momentum can overlap the grave; and the child was within them and swept onward with the perfecting flowers, and the ripening fruit, and the insects which were feeling their wings ; and all unconsciously, in a moment as it were, she unfolded a little farther towards her own heyday of bloom. Suddenly from those heights of the primitive and the eternal Upon which a child starts and where she still lingered she saw her future before her, shining with new lights, and a wonderful conviction of bliss to come was over her. It was that conviction Which comes at times to all unoonquered souls, and which has the very essence of truth in it, since it overleaps the darkness of life that lies between them and that bliss. Suddenly Ellen felt that she was born to great happiness, and all that was to come was towards that end. Her heart beat loud in her ears. There was a whippoorwill calling in some trees to the left; the moon was dim under a golden dapple of clouds. She could not feel her hands or her feet ; she seemed to feel nothing but her soul."

The scene of the story is laid in an industrial centre of New England, and every one of the dramatis personae is con- nected more or less closely with a great shoe factory. But, apart from the idealising faculty which enables Miss Wilkins to invest the most humble and prosaic surroundings with the glamour of romance, the standard of living amongst the

American working class, and the intersection of social strata, or, to put it in another way, the absence of social barriers, which outside a few great cities is the rule throughout the States, remove the story entirely from the category of alum fiction.

Lelirii° Portion of Labour. By Mary B. Wilkins. London: Harper and Brothers. We often hear, or used to hear, of the luxury in the homes of English pitmen, but the account of an ordinary workman. at a shoe factory driving down to his work in his own buggy is as novel to English readers as the notion of one of the heads of the firm paying a formal call on the daughter of one of his own hands. But it is just these unfamiliar incidents that lend' interest and variety to the narrative. Miss Wilkins may perhaps have read an excess of her own native refinement into the characters of her working men and women, but they are,. with hardly an exception, admirably-conceived and interesting personages. Andrew Brewster, the heroine's father, a patient,. gentle New Englander, dignified in the presence of adversity,. yet keenly sensitive withal ; his fiery wife, of coarser fibre, not untinged by vulgarity, yet redeemed by her fierce pride in her beautiful daughter; her warm-hearted, tempestuous. sister Eva; little Abby Atkins, half-minx, half-Martyr; old Mrs. Zelotes Brewster, Ellen's grandmother, with her' indomitable family pride,—these are only a few out of many characters, at once strange yet genuine, that enlist the atten- tion and win the sympathy of the reader. It is characteristic,. moreover, of Miss Wilkins's outlook on humanity that while she presents .us with many imperfect natures, there is no villain of the plot. Even the apparently callous head of the- shoe factory turns out on his death to have been a crypto- benefactor. The book, as we have said at the outset, is unduly spun out towards the close; Ellen is less attractive in the arena of action than in the dreamland of early girlhood ; and Miss Wilkins's handling of the problems involved in the conflict of Labour and Capital is by no means convincing. But with all. deductions, The Portion of .Labour could only have been written by the hand that gave us Pembroke and A New Eng- land Nun. What Miss Wilkins says of her heroine may,. with the necessary modifications, be applied to her own best work as compared with that of her American contem-: poraries :—" In truth there was about Ellen a majesty and.' nobility of youth, and innocence, and beauty which overawed.; The other girls of the class were as young and pretty, but., none of them had that indescribable quality which seemed to raise her above them all."