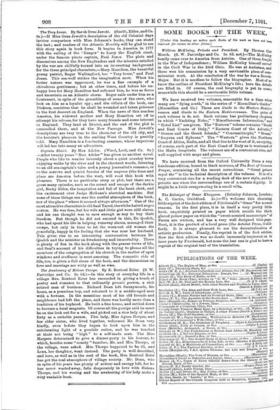 Os.) —After twenty years "Mar Adeler " has given us another novel. People who like to wander leisurely about a quiet country town enjoying walks by the river and in the chestnut woods, listening to an old sea-captain's tales and a young journalist's romance, or *to the sorrows and quaint fancies of the negroes (the time and place are America before the war), will read this book with pleasure. There is no particular story or plot, but there are a great many episodes, such as the arrest and escape of the darkie girl, Becky Slifer, the temptation and fall of the bank clerk, and the excitement over Judge McGann's electrical machine. But none of these things can mar the restful atmosphere of the book, &nor of the place "where it seemed always afternoon." One of the most attractive characters is old Saul Tarsel, the white-haired negro sexton. He was free, but his wife and little girl were still slaves, and his one thought was to save enough in. ausy to buy their freedom. But though he did not succeed in this, Dr. Quelch, who had spent his life in helping runaway slaves, managed their .escape, but only in time to let the worn-out old woman die peacefully, happy in the feeling that she was near her husband. This gives rise to an interesting conversation between Dr. Quelch and the minister on Swedenborg and immortality. There is plenty of fun in the book along with the graver views of life, and Saul's account of his difficulties in trying to please all the -members of the congregation of his church in the matter of open windows and stuffiness is most amusing. The romantic side of life, too, is given a full share of the book, and the discussions on love and marriage are witty as well as wise.