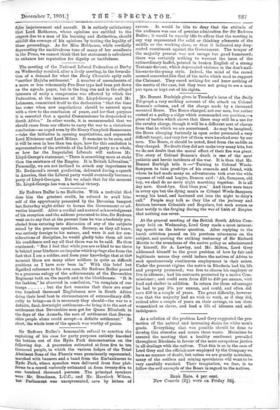 Page 3, 7 December 1901 — Sir Redvers Buller is no Bullerite. With a restraint that
Close

Sir Redvers Buller is no Bullerite. With a restraint that

does him the greatest credit, he refused to avail him- self of the opportunity presented by the Devonian banquet last Saturday night either to harass the Government or ad- vertise himself. After a cordial and natural acknowledgment of his reception and the address presented to him, Sir Redvers went on to say that at the present time he was absolutely pre. eluded from entering into discussion of any of the subjects raised by the previous speakers. Secrecy, as they all knew, was entirely foreign to his nature, and were it not for con- siderations of discipline, he would gladly take them all into Es confidence and say all that there was to be said. He then continued: "But I feel that while you are so Lind to the there is behind yourkindness an impulse which springs also from the fact' that I am a soldier, and from year- knowledge that at this moment there are many other soldiers in quite as difficult positions as I have ever been in." With this brief but dignified reference to his own case, Sir Redvers Buller passed to a generous eulogy of the achievements of the Devonshire Regiment both on the march and in the blockhouses. "It is the fashion," he observed in conclusion, "to complain of our troops but the fact remains that there are some two hundred thousand Englishmen now in South Africa doing their level best in circumstances of extraordinary diffi- culty to bring—as it is necessary they should—the war to a definite, Ann], downright settlement—to bring it to the sort of settlement that Devonshire men got for Queen Elizabeth in the days of the Armada, the sort of settlement that Devon- shire people alone could accept—a definite settlement." In short, the whole tone of the speech was worthy of praise.