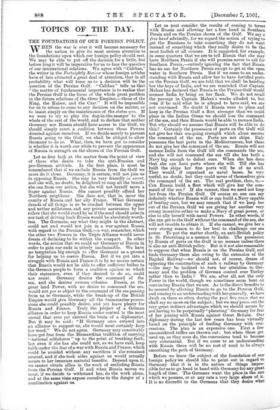 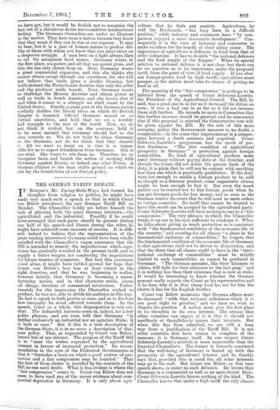 WHEN the war is over it will become necessary for the nation to give its most serious attention to the foundations upon which our foreign policy should rest. We may be able to put off the decision for a little, but before long it will be imperative for us to face the question of our international relations. We agree with "Celebes," the writer in the Fortnightly Review whose foreign articles have of late attracted a great deal of attention, that in all probability what will force us to a decision will be the question of the Persian Gulf. " Catches " tells us that "the matter of fundamental importance is to realise that the Persian Gulf is the focus of the whole great problem in the future relations of the three Empires,—those of the King, the Kaiser, and the Czar." It will be impossible for us to refuse to come to any decision on the matter, or to insist simply on the maintenance of the status quo. If we were to try to play the dog-in-the-manger to the whole of the rest of the world, and to declare that neither Germany nor Russia should have access to the Gulf, we should simply court a coalition between those Powers directed against ourselves. If we decide merely to prevent Russia going to the Gulf, we shall be obliged to allow Germany to do so. What, then, we have got to consider is whether it is worth our while to prevent the appearance of Russia in strength on the shores of the Persian Gulf.