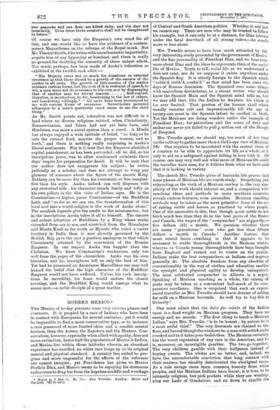 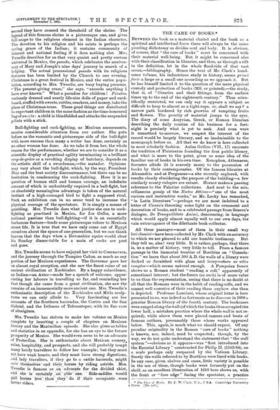 THE Mexico of to-day presents some very curious phases and contrasts. It is peopled by a race of Indians who have been in contact with Europeans for several centuries; yet it would be impossible to find a more conservative type, or to instance a race possessed of more limited ideas and a smaller mental horizon, than the Aztecs, the Zapotecs and the Mixtecs. Con- servatism, however, especially when allied with apathy, does not mean extinction; hence half the population of Mexico is Indian, and Mexico lies Within those latitudes wherein, an abundant experience has testified, no white race keeps up to its original mental and physical standard. A country less suited to pro- gress and more ungrateful for the efforts of the reformer one cannot imagine; yet Providence has given to Mexico Porfirio Diaz, and Mexico seems to be repaying his strenuous endeavours to drag her from the hopeless muddle and wreckage • Mexico as I Sato it, 335. Mr3. Alec Tweedie. London : Must and !Hackett fAi la net] of Central and South American politics. Whether it wiltiagt we 'cannot say. There are men who may be trusted to hinew his example, but it cattonly be at a distance, for Diaz laboliff, under the fatal drawback of all strong rulers,.—he •stands

more or less alone.' • ' Tweedie seeine to have been much attracted by the very interesting study presented by the government of Mexico and the fine personality of President Diaz, and we hear even more about Diaz and- the ideas he represents than of the social life of Mexico., Truth to tell,, social life as we understand it does not exist, 'nor do we suppose it exists anywhere under the Spanish flag. It is utterly foreign to the Spanish Mind, " cabin'd, cribb'd, confiii'd" as that Mind has been since the days of Roman dominion. The Spaniard sees some things with marvellous distinctness, as a recent writer who should kilo* the Spanish Main and the Spanish mind fells us, but we may add that, like the Indian he despisea, his vision is for ever limited. 'That portion of the human h n tskeullagewhicohf usually remains soft and impressionable ti twenty-one mast in the Spanish infant* he ossified at birth. Yet the Mexicans are doing Wonders under the example- Of President Diaz ; for patriotism and the sense of duty and . endeavour never yet failed to pull p nation out of-the Slough of Despond.

Mrs. 'Tweedie spent; we should say, tit) much of her time on the railway to gather more thane.. bird's-eye view of Mexican' life: One requires to be inoculated with the mental ideas of a bounty to be able to'appreciate its life as a whole, or if only to' act as a safeguard against falling in love-With it. Of course, one may very well ask what more of Mexicanlife could- the 'traveller have seen, for it 'follows- from what we have said

that it islacking in variety. _ .

The sketch Mrs: Tweedie gives Of hacienda life proves that some phases of Mexican life are worth study. Stupefying_and exhausting, as the work. of . a Mexican cowboy is, the very sim- plicity of the work 'should interest us, and a comparison with ranching ideas and ,methods in , more northern countries reveals curious features, even anomalies. Mexican ranching Methods may be taken as the most primitive form of the art of raising cattle and horses as practised by white people: One of the anomalies is this, that though good cattle do not fetch much less than they do in the beat parts of the States and Canada, the wages of the "cowpuncher" are niggardly,— five dollars (21) a month. We question whether there are many " greenhorns" even who get less than fifteen dollars a month in Canada ! Another feature that must retard horse ranching is that it appears to be necessary to stable thoroughbreds in the Mexican winter, whereas in Canada young thoroughbreds have been brought from England and turned out to winter on the prairie. Indians make the, best cowpunchers, as Indians and .negroes generally . do. The absolute freedom from any shackles of conventionality in the way of clothes and education enables the eyesight and physical agility to develop unitnpaire.d. The most celebrated cowpuncher in Alberta is a negro. Speaking of Mexican ranching • as a whole, the raising. of goats may be taken as a convenient hall-mark of its com- parative excellence. One is surprised that such an experi- enced traveller as Mrs. Tweedie should have.dreamt of asking for milk on a Mexican hacienda. As well try to buy fish at Grimsby !

One must admit that the doles far niente of the Indian races is a dead weight on Mexican progress. They have no energy and no morals. "The first thing to teach a Mexican Indian," says Mrs. Tweedie, "is to be honest ; by nature he is a most awful thief." The very doormats are chained .to. the. floor, and barred though the windows be, a man with a stick and a crooked nail in it takes your bedclothes. The Mexican certainly has the worst reputation of any rate in the Americas, and he is, moreover, an incorrigible gambler. The two go together.. The very children gamble with their halfpence instead. (4. buying sweets. The whites are no better,. and,. indeed, we have the uncomfortable conviction that long contact with their maiters. has steadily deteriorated the aboriginal races. As' a rule savage races learn common honesty from, white peoples, and the Mexican Indians have learnt, it is true, to be intensely religious, but pick pockets. while they' are worship-. ping our Lad, of Guadalupe: and sit down to thinible gin second they have crossed the threshold of the shrine. • The kgend of this famous shrine is a picturesque one, and gives fall scope to the religious element in the Indian character. The devotion to his religion and his saints is perhaps the saving grace of the Indian; it sustains community of terest and national feeling if it does nothing else. MIT. Tw.ecd.ie describes for us that very quaint and pretty custom universal in Mexico, the posada, which celebrates the anniver- sary of Mary and Joseph's nine days' journey in search of a lodging. The actual processional posada with its religious features has been limited by the Church to one evening. Christmas is a great festival in Mexico, and the entire popu- lation, according to Mrs. Tweedie, are busy buying presents. "The present-giving craze," she says, "exceeds anything I have ever known." What a paradise for children ! Pinatas, variously dressed and nearly life-size dolls of paper and card- board, stuffed with sweets, rattles, crackers, and money, take the place of Christmas-trees. These good things are distributed to expectant children in the same fashion as the time-honoured bag of sweets: a child is blindfolded and attacks the suspended pinata with a stick.

Bull-fighting and cock-fighting, as Mexican amusements, receive considerable attention from our author. She puts before us the romantic and picturesque side of the bull-fight with more success than many a writer has done, certainly as no other woman has done. As we take it from her, the whole reason for the performance, whether we are to consider it as a scientific display of practical agility terminating in a brilliant coup-de-gra'ce or a revolting display of butchery, depends on the artistic skill of a swordsman,—the matador. Opinions may vary about the bull-fight, which, by the way, President Diaz and the best society discountenance, but there can be no hesitation in condemning the cock-fighting. Here it is no question of human skill and human corn age, an indefinite 0

amount of which is undoubtedly required in a bull-fight, but an absolutely meaningless advantage is taken of the natural instinct of a high-couraged bird to fight a supposed rival. Such an exhibition can in no sense tend to increase the physical courage of the spectators. It is simply a means of gambling. Mrs. Tweedie does what justice she can to cock- fighting as practised in Mexico, for Los Gallos, a more national pastime than bull-fighting—if it is an essentially barharous feature—lends some picturesque colour to Mexican street life. It is true that we have -only come out of Egypt ourselves about the space of one generation, but we can' thank heaven that the days when a Deionshire squire would clear his Sunday- dinner-table for a main of cocks are past and gone.

Tweedie seems to have enjoyed her visit to Cuernavaca, and the journey through the Tampico Callon, as much as any portion of her Mexican experiences. The Governor gave her an almost royal reception, and. she saw the finest ruins of an ancient civilisation at Xochicalco.. By a happy coincidence, an-Indian—an Aztec—made her a speech of welcome, appre= dating her labours in travelling so far, and reminding her that though she came from a great civilisation, she saw the remains of an immemorially more ancient one. Mrs. Tweedie's eathusiastic. description of the Xochicalco and Mitla sculp- tures we can only allude to. Very fascinating are her accounts of the Southern haciendas, the Cortes and the San' Gabriel, and the Isthmus of Tehuantepec, with its fine race of aborigines.

Mrs. Tweedie has striven to make her volume on Mexico complete by inserting a couple of chapters on Mexican history and the Maximilian 'episode. She also gives us tables and statistics in an appendix, for she has an eye to the future Prosperity of Mexico. She would even seem to be an advocate of Protection. She' is enthusiastic about Mexican scenery, rains, hospitality, and prospects, and she will probably tempt luanPiardy travellers to follow her example; but they must not have weak 'hearts, and they must have strong digestions, .and ady tcnvellers, if they go to a cattle hacienda, might save themselves and their horses by riding astride. Mrs. Tweedie is firnious as an advocate for the divided skirt, afld she is certainly an able- one - Side-saddles *mild