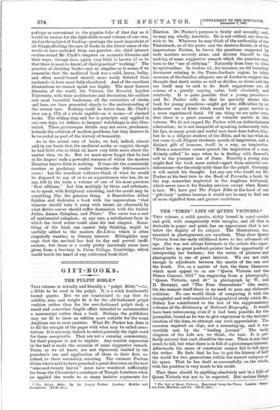 . THE PULPIT BIBLE * THIS volume .is actually and literally a "pulpit Bible,"—i.e., a Bible to be used in the pulpit. It is a solid, handsomely bound quarto. But we are constrained to say that its solidity, size, and weight fit it for the old-fashioned pulpit cushion rather than for the new-fashioned pulpit desk, a small and somewhat fragile affair intended to accommodate a manuscript rather than a book. Perhaps the publishers may see fit to issue an edition more suitable for the usual Anglican use in such matters. What Dr. Parker has done is to fill the margin of the pages with what may be called anno- tations. It is not easy, indeed, to select precisely the right word for these marginalia. They are not a running commentary, for their purpose is not to explain. Any notable expression in the text is made the occasion of some suggestive remark. Texts, as we all know, are not rigorously limited in the preacher's use and application of them to their first, or, indeed, to their secondary, meaning. The eminent Puritan divine who is said to have preached a great discourse on the text "nine-and-twenty knives" must have wandered sufficiently far from the Chronicler's catalogue of Temple furniture when he applied the words to as many incisive arguments for • The Pulpit Bale. By Dr. Joseph Parker. London: Hodder and Stoughton. [4•2 2s. net.] Election. Dr. Parker's purpose is firstly and secondly, and, we may say, wholly, homiletic. He is not critical, nor does he wish to be. Whatever he may think of the authorship of the Pentateuch, -or-of the proto- and the deutero-Isaiah,-or of the imprecatory Psalms, he leaves the questions suggested by such matters severely alone, and devotes himself to the making of some suggestive remark which the preacher may turn to the "use of edifying." Naturally from time to time he spiritualises. In Joshua xii., for instance, an old boundaq document relating to the Trans-Jordanic region, he takes occasion of the familiar allegoric use of Jordan to suggest the thought that death unites as well as divides, as rivers and the sea itself may be said to do. Such suggestions are, of course, of a greatly varying value, both absolutely and relatively. It is quite possible that a young preacher-- and Dr. Parker tells us that he specially means this book for young preachers—might get into difficulties by an indiscreet use of hints which would be of great service to a more experienced hand. Of one thing we are quite sure, that there is a great amount of valuable matter in this volume. We do not regard Dr. Parker with an indiscriminate admiration; he is not incapable of speaking indiscreetly with his lips, as many great and useful Men have done before him; but he is a diligent student of the Bible, and he has what do not come to all diligent students, moods of inspiration, and a distinct gift of humour, itself, in a way, an inspiration. "Even a committee cannot quench the inspiration of a man divinely called," he says when he is dealing with Samuel's call to the youngest son of Jesse. Possibly a young man might find the book more suited—apart from material con- siderations—for the study table than for the pulpit. Certainly it will enrich his thought. Let any one who would see Dr. Parker at his best turn to the Book of Proverbs, a book, by the way, somewhat neglected in the Anglican lectionary, which never uses it for Sunday services except when Easter is late. We have put The Pulpit Bible at the head of our " gift-book " notices because it would not be easy to find one of more dignified form and greater usefulness.