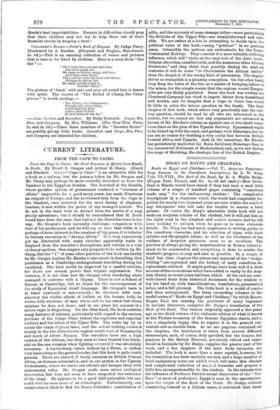 From the Cape to Cairo : the First Traverse of Africa from Iteuth, to North. By Ewart S. Grogan and Arthur H. Sharp. (Hurst and Blackett. 2 1 s .) —" Cape to Cairo" is an attractive title for a book or a railway, but the journey taken by Mr. Grogan and Mr. Sharp may perhaps be more correctly described as from the Zambesi to the Egyptian Soudan. The downfall of the Khalifs, whose peculiar system of government rendered a "traverse of Africa" impossible for a good many years, has made Khartoum an outpost of Europe, and the northward trek from the Cape to the Zambesi, once reserved for the most daring of elephant. hunters, is now within the power of any moneyed tourist. We do not in the least wish to detract from the merits of a very plucky adventure; but it should be remembered that M. Decle would have done the same feat had not the Dervishes been in the way. Mr. Grogan's book naturally challenges comparison with that of his predecessor, and we will say at once that while it is perhaps•of more interest to the amateur of big game, it is inferior in literary execution to " Savage Africa." It is very expensively got up, illustrated with many sketches apparently made in England from the traveller's descriptions, and written in a vein of cheery egotism. One chapter only purports to be written by Mr. Sharp, but the "I" of some other portions of the book can hardly be Mr. Grogan (unless Mr. Rhodes is inaccurate in describing that gentleman as a Cambridge undergraduate travelling during his vacation). The book would be improved by a careful revision, for there are several points that require explanation. For instance, it is not clear how Mr. Grogan when wandering alone managed to converse with a Pygmy. There is now a School of Haussa at Cambridge, but no tripes for the encouragement of the study of Equatorial dwarf language. Mr. Grogan's taste is at times equivocal or non-existent ; he discusses with com- placency the visible effects of bullets on the human body, he writes with virulence of men whose salt he has eaten but whose opinions he does not share, and in one place his account of a native orgie is disgusting. On the other hand, the book contains many features of interest, particularly with regard to the eastern portions of the Congo State (where the explorers met cannibal raiders) and the tribes of the Upper Nile. The route lay by or across the chain of great lakes, and the actual walking occurred mainly in the two little-known regions north-west of Tanganyika and north of Albert Nyanza. The travellers have not a high opinion of the African, but they seem to have treated him fairly, and on the one occasion when fighting occurred it was absolutely necessary. A travel-diary, unless written by a Heine, is seldom very interesting to the general reader, but this book is quite worth perusal. There are shrewd, if hasty, remarks on British Central Africa, on German colonisation, and on our system in the Uganda Protectorate, where we starve our officials and hamper them with unnecessary rules. Mr. Grogan made some minor zoological discoveries, but does not seem to have suspected the existence of the okapi. He appears to be a good field naturalist, but one could wish he were more of an ethnologist. Unfortunately, one cannot expect often to find Sir Harry Johnston's combination of

gifts, and the accounts of some strange tribes—more particularly the Shilluks of the Upper Nile—are straightforward and vale. able. We are rather at a loss in attempting to decide upon the political value of the book,—using "political" in no partisan sense. Ostensibly the anthers are enthusiastic for the Trans- Continental Railway. They consider it a most valuable civilising influence, which will strike at the very root of the slave trade, Belgian atrocities, cannibal raids, and the numerous other African diversions," and they think that possibly during the next six centuries it will do more "to Christianise the African native" than the despatch of the wrong kind of missionary. The engine- driver as evangelist is a pleasing conception. On the other hand, they deny the value of the line as a means of bringing labour to the mines, for the simple reason that the regions round Tangan- yika are very thinly populated. Since the book was written the • Chartered Company has tried to import labour from Somaliland and Arabia, and we imagine that a Cape to Cairo line would do little to solve the labour question in the South. The final chapter of this book, which enters very practically into the rail- way question, should be read by all who are interested in the matter, but we cannot see that any arguments are advanced in favour of Mr. Rhodes's scheme as against one or two short trans- verse lines on the plan of the Uganda Railway. Nyassaland ought to be linked up with the coast, and perhaps with Bulawayo, but we can see no reason for building a very costly line between British Central Africa and Uganda. And, in the meantime, Ur. Rhodes has persistently neglected the Beira. Salisbury-Bulawayo line, to the commercial detriment of Mashonaland, and, as we saw during the siege of Mafeking, the strategic loss of the British Empire.