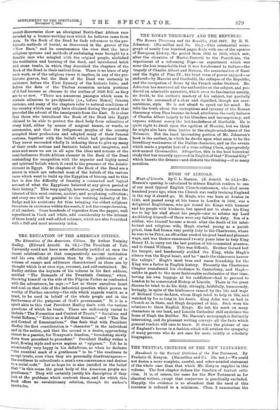 THE ROMAN THEOCRACY AND THE REPUBLIC.

The Roman Theocracy and the Republic, 1946.1849. By R. M. Johnston. (Macmillan and Co. 1O.)—This substantial mono- graph of nearly four hundred pages deals with one of the agonies of European history, the period from 1846 to 1849, which saw, after the elevation of Mastai-Ferretti to the Pontificate, the experiment of a reforming Pope—an experiment which was none the less remarkable that it was foredoomed to failure—the tragedy of Charles Albert and Novara, the assassination of Rossi and the flight of Pius IX., the brief term of power enjoyed—or endured—by Mazzini and Garibaldi, the collapse of the Republic, and the occupation of Rome by the French under Oudinot. Mr. Johnston has mastered all the authorities on the subject, and pro- duced an admirable narrative, which owes its fascination mainly, no doubt, to the author's mastery of his subject, but partially also to his command of a clear and dignified, though not over- ambitious, style He is not afraid to speak out his mind. He tells the truth about the corruptions and tyranny of the Roman theocracy when Pius became its head, attributes the early failures of Charles Albert largely to his blunders and incompetency, and exposes without mercy the hot-headedness of Garibaldi. He is quite right to dwell upon the egotism of Mazzini, but we think he might also have done justice to the single-mindedness of the Triumvir. Not the least interesting portion of Mr. Johnston's book is the earliest, in which he dwells upon what seem to be the hereditary weaknesses of the Italian character, and on the events which made a popular hero of a wine-selling Cleon, appropriately nick-named Ciceroacchio. Altogether, this is the best historical study that has recently appeared in English of that "Eternal City" which haunts the dreams—and distorts the thinking—of so many novelists.