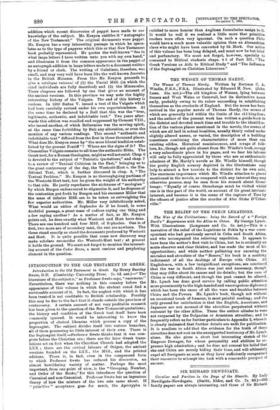 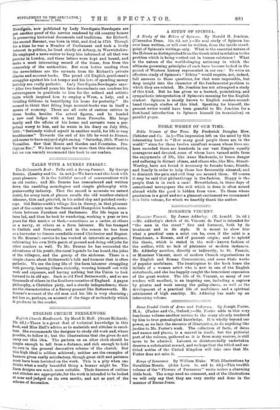 Newdigate. now published by Lady Newdigate-Newdegate are yet another proof of the Service rendered by old country houses in preserving historical documents and traditions. Sir Richard, the second Baronet, was born in 1649, and died in 1710. Though for a time he was a Member of Parliament and took a lively interest in politics, he lived chiefly at Asbury, in Warwickshire. He employed a news-writer to keep him informed of all that was passing in London, and these letters were kept and bound, and make a most interesting record of the times, free from the censorship of the authorities. But even better reading than the news-letters are the extracts from Sir Richard's private diaries and account-books. The proud old English gentleman's struggles against his hot temper and his love of spending money lavishly are really pathetic. Lady Newdigate-Newdegate says : "After two hundred years his later descendants can condone his extravagance in gratitude to him for the refined and artistic taste which inspired him to employ a Wren, a Lely, and a Grinling Gibbons in beautifying his home for posterity." He seemed to think that filling, huge account-books was in itself a means of economy. There are all sorts of curious entries in these books, besides the actual figures, and he headed a new coal ledger, with a text from Proverbs. His large family and the affairs of his house and servants were a per- petual worry to him, and he wrote in his diary on July 30th, 1683: "Seriously wished myself in another world, for life is very troublesome." Towards the end of his life he went to France, and seems to have enjoyed sight-seeing. "Saturday, 28th. Went to Versailles. Saw that House and Garden and Fountains. Pro, digious fine." We have not space for more than this short notice, but we can warmly recommend this book to our readers.