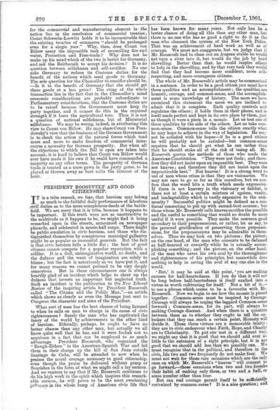 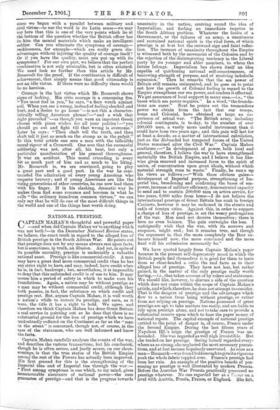 TT is a trite remark, we fear, that heroism may belong . as much to the faithful daily performance of laborious ,civil duties ante the more conspicuous deeds of the battle- fu31d. We are sorry that it is trite, because it happens to be important. If this truth were not so unattractive to the multitude as it happens to be, we Might find it being remarked Upon in the• streets, announced on newspaper placards; and celebrated in music-hall songs. There might 'be public emulation in civic heroism, and those who dis- tinguished themselves by conspicuous municipal gallantry might be as popular as successful generals. -But the fact is that civic heroism falls a little flat ; the best of good citizens cannot compete for a popular reputation with a soldier. It is a dull, unimaginative world, no doubt, and the dulness and the want of imagination are. 'solely to blame; but the fact is notoriously as we have put it, and for many reasons we cannot pretend to be very deeply censorious. But in these circumstances one is always heartily glad of an incident which helps tci cheer up the dulness that invests an iinpOrtant but neglected truth. Such an incident is the publication in t-he New Liberal RebieW of the inspiring article by President. Roosevelt called "The Citizen' and the Public Man,"—an article which shows as clearly as even the Message just sent to Congress the character and aims of the President.

What sort of man has the best chance of being listened to when he calls on men to charge in the cause of civic righteousness ? Surely the man who ha,s captivated, the fancy of the world by achievements in the other kind of heroism. Ethically, perhaps, he ought to have no better chance than any other man, but actually we all know quite well that he has, and it were foolish not to acqtriesce in a fact that can be employed to so much advantage. President Roosevelt, who organised the " Rough-Riders " in the American-Spanish War and led them in their charge np the hill of San Juan outside Santiago de Cuba, will be attended to now when he praises the moral courage necessary to good citizenship, even though the praise be delivered without pomp. or flourishes m the form of what we might call a lay sermon: And we venture to say that if Mr. Roosevelt continues to do his high work in the spirit which inspire§ this remark- able sermon, -he- will prove to be the most sweetening .Ti-fl-rience in the whole lump of American civic life that has been known for many years. Not only has he 'a, better chance of doing all this than any other man, lint there is no one who has so good a right to do it as the man,vrho cleansed. the system of the New York Police. That was an achievement of hard work as well as of courage. We must not exaggerate, but we judge that if Mr. Roosevelt had to clean out an Augean stable he would not turn a river into it, brit would -do the job by hard shovelling. Better than that, he would inspire others to help in the shov Xing, and by that very task they would find that they had become more confident, more self- respecting, and more courageous citizens.

The whole of Mr. Roosevelt's article may be summarised in a sentence. In order to be a, good citizen you must have three qualities and an accomplishment ; the qualities are honesty, courage, and common-sense, and the accomplish- ment is some knowledge of history. The more we have examined this statement the more we are inclined to admit that it is complete. Each quality controls and regulates the others ; it holds them in their places, and is itself made perfect and kept in its own place by them, just as though it were a piece m a mosaic. Let us test one of these qualities by the side of the others. Let us take com- mon-sense. Common-sense tells the citizen exactly what he may hope to achieve in the way of legislation. He may not be satisfied with his hopes—if he is a good citizen he will probably not be satisfied—but common-sense requires that he should get what he can rather than that he should stake all at the risk of losing all. Mr. Roosevelt quotes the methods of those who made the American Constitution. "They were not fools ; and there- fore they did not insist upon an impossible best. They were not knaves ; and therefore they did not insist upon the impracticable best." Not knaves ! It is a strong word to use of men whose crime is that they are visionaries. We may not care to go so far as this ourselves, but we con- fess that the word hits a truth which needs expression. If there is not knavery in the visionary or faddist, is there not at least a certain mixtun3 of egoism, vanity, and inadaptability which is vastly expensive to the com- munity? SuCcessful politics might be defined as a ep- tinual consenting tO put up with second-best courses ; but those whom Mr. Roosevelt calls knaves sacrifice the possible and the usefsal to something that would no doubt be more useful if it were' possible. They Make the common good secondary to their prepostessions, or rather, let us say, to the personal gratification of preserving those prepossei- dons, for the prepossessions may be admirable in them- selves. Thus we may look on two pictures : the picture, on the one hand, of he man who consents to be defamed as half-hearted or cowardly while he is actually accom- plishing something ; and the picture, on the other hand, of the man who saves his own soul by the thoroughness and righteousness of his principles, but meanwhile does nothing to help in saving the soul of any One else in the world.

But,' it may be said at this point, 'you are snakiN4 excuses for half-heartedness. If you de that it will not be long before half-heartedness is itself exalted into .a virtue as worth cultivating for itself.' Not a bit of it,— to use a phrase which seems to be a favourite with Mr. Roosevelt. - Now we begin to see how the mosaic is pieced together., _Common-sense must be inspired by Courage. Courage will always -be urging the laggard Common-sense forward ; Common-sense, for its part, will always be making Courage discreet. And when there is a question between them as to whether they ought to tell the on- lookers that they can. reach a certain point, Honesty will decide it. These three virtues are a, memorable trinity ; they are to civic endeavour what Faith, Hope, and Charity are to Christianity. , To put our test in a different way, we might say that it is good that we should add ever so little to the extension of a right principle, but it is not good that we should add less than we possibly can. We must recognise that in the po1itie:a1;and therefore in the civic, life two and two frequently do not make four. We must not wait for those rare occasions which are the only ones on which Mr. Roosevelt's " knaves " will consent tp go forward—those occasions when two and two forsake their habit, of making only three, or two and ,a half, or some number other than four. • But can real courage permit itself to be sufficiently restrained by common-sense ? It is a nice question; and since we began with a parallel between military and civil virtue—to use the word in its Latin sense—we may Say here that this is one of the very points which lie at the bottom of the question whether-the British officer has in. him the mental materials which make an intelligent soldier. Can you eliminate the symptoms of courage— recklessness, for example—which are really grave dis- advantages without injuring the quality of courage itself ? Or if you have the quality, must you put -up with its symptoms? For our own part, we believe that the perfect -combination is not only attainable, but is often attained. We need look no further than this article by Mr. Roosevelt for. the proof. If the combination is difficult of achievement, that simply means that good citizenship is not an idle virtue. If there were no difficulty there would bo no heroism.

Courage is the last virtue which Mr. Roosevelt shows signs -of lacking. His civic courage is a consuming fire. “Yon-must feel in you," he says, "a fiery wrath against evil. When you see a wrong, instead of feeling shocked and hurt, and a desire to go home "—is not this a character- istically telling American phrase?—" and a wish that right prevailed "—as though you were an impotent Greek -thorns with pious wishes for all your politics T.—" you -should go out and fight till that wrong is overcome." Later he says : Thou shalt tell the truth, and thou shalt tell it just as much on the stump as in the pulpit." To this brief article one sees a man with the inflexible naoml rigour of a Cromwell. One sees that the successful -soldiering was not, after all, his bent, but only a, particular manifestation of his general thoroughness. It was an accident. This moral crusading is every bit as much part of him and as much to his liking. Mr. Roosevelt is; we are convinced, going to play a great part and- a good part. In the war he com- inanded thefl admiration of every young American who respects bravery; and if young Americans are like the 'rising generations of other countries, he can now lead them 'with his finger. If in his slashing, dramatic way he makes them find some romance and heroism in what he calls 'the ordinary humdrum common virtues," we can • only say that he will do one of the most difficult things in the world and one of the things best worth doing.