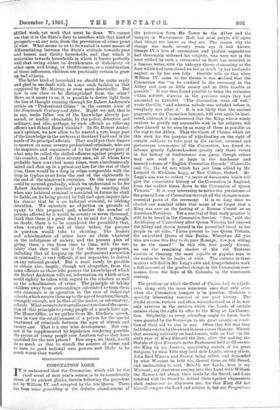 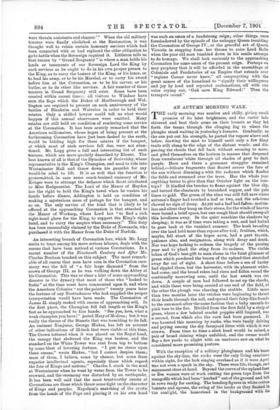 TT is understood that the Coronation, which will be the " Chief event of next year's season, is to be-consideinbly shorn of IN ancient glories; therein following the, precedent set by-William IV. and accepted by the late Queen. There has been some grumbling at the definite abandonment of the procession from the Tower to the Abbey and the banquet in Westminster Hall, but most people will agree that things are better as they are. The reason why the change was made seventy years ago is well known. George IV.'s love of ostentation and profuse expenditure had thoroughly sickened his subjects, who were not' in the least edified by such a ceremonial as Scott has recorded in a famous letter, with the unhappy Queen clamouring at the door which had been closed on her as much by her husband's neglect as by her own folly. Greville tells us that when William IV. came to the throne it was decided that the Coronation was "to be confined to the ceremony in the Abbey and cost as little money and as little trouble as possible." It was thus found possible to bring the estimates within £30,000, whereas in the previous reign they had amounted to E240,000. "The Coronation went off well," wrote Greville, "and whereas nobody was satisfied before it, everybody was after it." It is not likely that the ancient pageants, or the Coronation banquet, will ever again be insti- tuted, although it is understood that the King, who is wisely anxious to gratify any reasonable wish in his subjects, will allow himself to be seen by as many of them as possible on the way to the Abbey. Thus the Court of Claims, which sat this week for the purpose of adjudicating on the right of certain subjects to take part in the ancient, reverend and picturesque ceremonies of the Coronation, has found its labours greatly lightened,—how greatly only those versed in the history of land-tenures can guess, though others may now read it at large in the handsome and learned volume of "English Coronation Records" (Constable and Co., 31s. 6d. net) which has just been edited by Mr. Leopold G. Wickham Legg, of New College, Oxford. Mr. Leas aim was to collect "a series of documents which will give the consecutive history of the Coronation in England, .from the earliest times down to the Coronation of Queen Victoria." It is very interesting to notice the persistence of the general form of Coronation through all the changes in non- essential' parts of the ceremony. It is so long since we elected our nominal rulers that many of us forget thati a King was ever on the footing of a Roman Consul or an American President. Yet a survival of that early practice is still to be heard in the Coronation Service. "Sirs," said the Archbishop of Canterbury after Queen Victoria had entered the Abbey and shown herself in the prescribed ritual to her people on all sides, "I here present to you Queen Victoria, the undoubted Queen of this Realm: Wherefore All you who are come this Day to do your Homage, Are you willing to do the same ? " In this rite, now purely formal, we see the remaining shadow of the old Teutonic custom of choosing the most capable or popular man in the nation to be its leader or ruler. The curious in these matters will find in Mr. Legg's able and comprehensive work a full account of the gradual change in the Coronation cere- monies from the days of St. Columba to the nineteenth century.

The petitions on which the Court of Claims had to adjudi- cate, along with the more numerous- ones that only arise when the Coronation banquet is in question, illustrate a specially interesting survival of our past history. The feudal system, curious and often misunderstood as it is, now only survives in the services which the Lords of certain minors claim the right to offer to the King at his Corona- tion. Originally, as every schoolboy ought to know, lands were granted by the Sovereign to his great vassals on condi- tion of their aid to him in war. Often they felt that they held their estates by the sword in more senses than one. Blount, that amusing authority on land-tenure, tells us that "in the sixth year of King Edward the first, after the making the Statute of Quo Warrant° in the Parliament held at Glocester, the King by his Justices, questioning certain of his great Subjects, by what Title they held their Ltinds ; among others, John Earl Warren and Surrey, being called, and demanded by what Warrant he held his,.shewed them an Old Sword, and unsheathing it, said, 'Behold, my, Lords, here is my Warrant; my Andestors coming into this Land with William the Bastard, did obtain their landslip the Sword, and lam' resolved with the Sword to defend them against whomsoever shall endeavour to dispossess me; for that King did not himself conquer the Land and subdue it, but our Progenitors were therein assistants and sharers.' " When the old military tenures were finallye abolished at the Restoration, it was thought well to retain certain honorary services which had been =fleeted with or had replaced the older obligation to go to battle when the Sovereign required it. Littleton tells us that tenure by "Grand Sergearity " is where a man holds his lands or tenements of our Sovereign Lord the King by such services as he ought to do in his own proper person to the King, as to carry the banner of the King, or his lance, or. to lead his army, or to be his Marshal, or to carry his sword before him at the Coronation, or to be his carver, or his butler, or to do other like services. A fair number of these tenures in Grand Sergeant), still exist. Some have been created within recent times ; all visitors to Windsor have seen the flags which the Dukes of Marlborough and Wel- lington are required to present on each anniversary of the battles of Blenheim and Waterloo in order to hold their estates. Only a skilled lawyer could tell us what would happen if this annual observance were omitted. Many estates are still held on condition of rendering some service at the Coronation. It has been acutely remarked that the American millionaires, whose hopes of being present at the forthcoming Coronation have just been dashed to the earth, would be bidding high for these estates if the banquet., at which most of such services fall due, were not aban- doned. Mr. Legg gives a fall and interesting list of such tenures, which are more quaintly described by Blount. The best blown of all is that a the Dymokes of Scrivelsby, whose. representative is the King's Champion, and used to ride into Westminster Hall and throw down his gauntlet for any would-be rebel to lift. It is as well that the function is pretermitted, in case some crack-brained emissary of Mr. Kruger were to attempt the defiance which Scott attributed to Miss Redgauntlet. The Lord of the Manor of Heydon has the right to hold the King's towel when he washes his bands before dinner, Addington is held en condition of making a mysterious mess of pottage for the banquet, and so on. The only service of the kind that is likely -to be offered at the approaching Coronation is that attached to the Manor of Worksop, whose Lord has "to find a rich right-hand glove for the King, to support the King's right hand, and to carry the sceptre when necessary." This duty has been successfully claimed by the Duke of Newcastle, whe purchased it with the Manor from the Duke of Norfolk.

An interesting branch of Coronation lore, which Mr. Legg omits to treat among his more serious labours, deals with the omens that have been noticed at various Coronations. In a recent number of the Nineteenth Century and After Mr. Charles Benham touched on this subject. The most remark- able of all omens that men have seen in the Coronation cere- mony was the fall of "a fair large diamond" from the crown of George III. as he was walking down the Abbey at his Coronation. This was so clear a hint of some approaching disaster to the dynasty that most of those who "looked to hefts" at the time must have commented upon it, and when the American Colonies "cut the painter" twenty years later the fortune of any Nostradamus who had supplied the proper interpretation would have been made. The Coronation of James 11 simply reeked with omens of approaching evil. In the first place, the Champion fell full length at the King's feet as he approached to kiss hands. "See you, love, what a weak champion you have!" jested Mazy of Modena; but it was really the throne of the Stuarts that was trembling to its fall. An eminent Nonjuror, George Hickes, has left an account of other indications of ill-luck that were visible at this time. The Crown tottered when it was placed on the Royal bead, the canopy that sheltered the King was broken, and the standard on the White Tower was rent from top to bottom by some blast of lowering fortune. "I put no stress upon these omens," wrote Hickes, "but I cannot despise them; most of them, I believe, come by chance, but some from superior intellectual agents, especially those which regard the fate of Kings and nations." Charles I. stick in the mud at Westminster when he went by water from the Tower to be crowned, and the ceremony was disturbed by an earthquake_ It has been well said that the most trustworthy omens at Coronations are those which throw some light on the character. of Kings and peoples. Napoleon's snatching of the crown from the hands of the Pope and piecing it on hie own head was such an omen of a headstrong reign; other thing were foreshadowed by the episode of the unhappy Queen troubling the Coronation of George IV., or the graceful act of. Queen Victoria in stepping from her throne to raise Lord Rolle when the poor old man tumbled down in his senile attempt to do homage. We shall look curiously to the approaching Coronation for some omen of the present reign. Perhaps we may prophesy that it will be afforded in the assemblage of Colonials and Feudatories of an Empire that extends over "regions Caesar never knew," all congregating with the great names of the homeland to "signify their willingness and joy by loud and repeated acclamations, all with one voice crying out, God save King Edward V Then the trumpets sound."