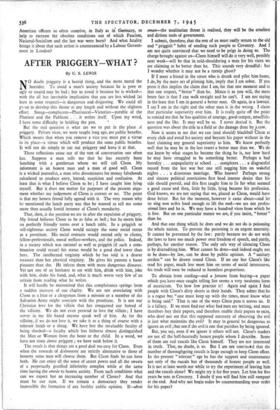 NO doubt priggery is a horrid thing, and the more moral the horrider. To avoid a man's society because he is poor or ugly or stupid may be bad ; but to avoid it because he is wicked— with the all but inevitable implication that you are less wicked (at least in some respect)—is dangerous and disgusting. We could all gl on to develop this theme at any length and without the slightest effort. Smug—complacent—Pharisaical—Victorian—parable of the Pharisee and the Publican . . it writes itself. Upon my word, I have some difficulty in bridling the pen.

But the real question is what are we to put in the place af priggery. Private vices, we were taught long ago, are public benefits. Which means that when you remove a vice you must put a virtue in its place—a virtue which will produce the same public benefits. It will not do simply to cut out priggery and leave it at that.

These reflections arose out of the sort of conversation one often has. Suppose a man tells me that he has recently been lunching with a gentleman whom we will call Cleon. My informant is an honest man and a man of good will. Cleon is a wicked journalist, a man who disseminates for money falsehoods calculated to produce envy, hatred, suspicion and confusion. At least that is what I believe Cleon to be ; I have caught him lying myself. But it does not matter for purposes of the present argu- ment whether my judgement of Cleon is correct or no. The point is that my honest friend fully agreed with it. The very reason why hr mentioned the lunch party was that he wanted to tell me some more than usually foetid instance of Cleon's mendacity.

That, then, is the position we are in after the expulsion of priggery. My friend believes Cleon to be as false as hell ; but he meets him on perfectly friendly terms over a lunch table. In a priggish or self-righteous society Cleon would occupy the same social status as a prostitute. His social contacts would extend only to clients, fellow-professionals, moral welfare-workers, and the police. Indeed, in a society which was rational as well as priggish (if such a com- bination could occur) his status would be a good deal lower than hers. The intellectual virginity which he has sold is a dearer treasure than her physical virginity. He gives his patrons a baser pleasure than she. He infects them with more dangerous diseases. Yet not one of us hesitates to eat with him, drink with him, joke with him, shake his hand, and, what is much worse very few of us refrain from reading what he writes.

It will hardly be maintained that this complaisance springs from a sudden increase of our charity. We are not associating with Cleon as a friar or a clergyman from a mission or a member of the Salvation Army might associate with the prostitute. It is not our Christian love for the villain that has conquered our hatred of the villainy. We do not even pretend to love the villain ; I have never in my life heard anyone speak well of him. As for the villainy, if we do not love it, we take it as a thing of course with a tolerant laugh or a shrug. We have lost the invaluable faculty of being shocked—a faculty which has hitherto almost distinguished the Man or Woman from the beast or the child. In a word, we have not risen above priggery; we have sunk below it.

The result is that things are a good deal too easy for Cleon. Even when the rewards of dishonesty are strictly alternative to those of honesty some men will choose them. But Cleon finds he can have both. He can enjoy all the sense of secret power and all the sweets of a perpetually gratified inferiority complex while at the same time having the entrée to honest society. From such conditions what can we expect but an increasing number of Cleons? And that must be our ruin. If we remain a democracy they render impossible the formation of any healthy public opinion. If—absit omen—the totalitarian threat is realised, they will be the cruellest and dirtiest tools of government.

I submit, therefore, that the rest of us must really return to the old and " priggish " habit of sending such people to Coventry. And I am not quite convinced that we need to be prigs in doing so. The charge brought against us—Cleon himself will do it very well, possibly next week—will be that in cold-shouldering a man for his vices we are claiming to be better than he. This sounds very dreadful: but I wonder whether it may not be a turnip ghost?

If I meet a friend in the street who is drunk and pilot him home, I do, by the mere act of piloting him, imply that I am sober. If you press it this implies the claim that I am, for that one moment and in that one respect, " better " than he. Mince it as you will, the mere brute fact is that I can walk straight and he can't. I am not saying in the least that I am in general a better man. Or again, in a lawsuit. I say I am in the right and the other man is in the wrong. I claim that particular superiority over him. It is really quite off the point to remind me that he has qualities of courage, good-temper, unselfish- ness and the like. It may well be so. I never denied it. But the question was about the title to a field or the damage done by ,a cow.

Now it seems to me that we can (and should) blackball Cleon at every club and avoid his society and boycott his paper without in the least claiming any general superiority to him. We know perfectly well that he may be in the last resort a better man than we. We do not know by what stages he became the thing he is, nor how hard he may have struggled to be something better. Perhaps a bad heredity . . . unpopularity at school . . complexes .. . a disgraceful record from the last war but one still nagging him on wakeful nights . . . a disastrous marriage. Who knows? Perhaps strong and sincere political convictions first bred intense desire that his side should prevail, and this first taught him to lie for what seemed a good cause and then, little by little, lying became his profession. God knows, we are not saying that we, placed as Cleon, would have done better. But for the moment, however it came about—and let us sing non nobis loud enough to lift the roof—we are not profes- sional liars and he is. We may have a hundred vices from which he is free. But on one particular matter we are, if you insist, " better " than he.

And that one thing which he does and we do not do is poisoning the whole nation. To prevent the poisoning is an urgent necessity. It cannot be prevented by the law : partly because we do not wish the laws to have too much power over freedom of speech, and partly, perhaps, for another reason. The only safe way of silencing Cleon is by discrediting him. What cannot be done—and indeed ought not to be done—by law, can be done by public opinion. A "sanitary cordon" can be drawn round Cleon. If no one but Cleon's like read his paper, much leas meet him on terms of social intercourse, his trade will soon be reduced to harmless proportions.

To abstain from reading—and a f orttori from buying—a paper which you have once caught telling lies seems a very moderate form of asceticism. Yet how few practice it! Again and again I find people with Cleon's dirty sheets in their hands. They admit that he is a rogue but "one must keep up with the times, must know what is being said." That is one of the ways Cleon puts it across us. It is a fallacy. If we must find out what bad men are Writing, and must therefore buy their papers, and therefore enable their papers to exist, who does not see that this supposed necessity of observing the evil is just what maintains the evil? It may in general be dangerous to ignore an evil ; but not if the evil is one that perishes by being ignored.

But, you say, even if we ignore it others will not. Cleon's readers are not all the half-heartedly honest people whom I describe. Some of them are real rascals like Cleon himself. They are not interested in truth. That, no doubt, is so. But I am not convincltd that the number of thoroughgoing rascals is large enough to keep Cleon afloat. In the present " tolerant " age he has the support and countenance not only of the rascals but of thousands of honest people as well. Is it not at least worth our while to try the experiment of leaving him and the rascals alone? We might try it for five years. Let him for five years be sent to Coventry. I doubt if you will find him still rampant at the end. And why not begin today by countermanding your order for his paper?