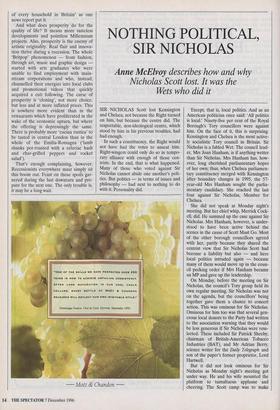 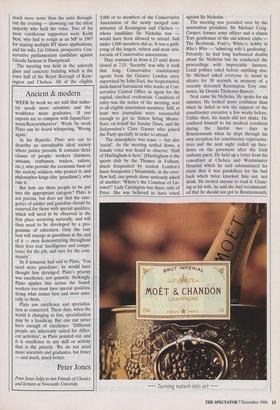 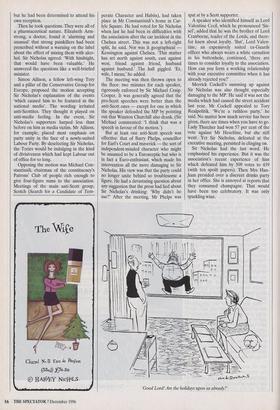 Anne McElva), describes how and why Nicholas Scott lost. It was the Wets who did it SIR NICHOLAS Scott lost Kensington and Chelsea, not because the Right turned on him, but because the centre did. The respectable, non-ideological centre, which stood by him in his previous troubles, had had enough.

In such a constituency, the Right would not have had the votes to unseat him. Right-wingers could only do so in tempo- rary alliance with enough of those cen- trists. In the end, that is what happened. Many of those who voted against Sir Nicholas cannot abide one another's poli- tics. But politics — in terms of issues and philosophy — had next to nothing to do with it. Personality did. Except, that is, local polities. And as an American politician once said: 'All politics is local.' Ninety-five per cent of the Royal Borough's Tory councillors were against him. On the face of it, this is surprising. Kensington and Chelsea is the most active- ly socialistic Tory council in Britain. Sir Nicholas is a fabled Wet. The council lead- er, Mrs Joan Hanham, is if anything wetter than Sir Nicholas. Mrs Hanham has, how- ever, long cherished parliamentary hopes of her own; thus, when Chelsea parliamen- tary constituency merged with Kensington After boundary changes in 1995, the 57- year-old Mrs Hanham sought the parlia- mentary candidacy. She reached the last four against Sir Nicholas, Member for Chelsea.

She did not speak at Monday night's meeting. But her chief whip, Merrick Cock- ell, did. He summed up the case against Sir Nicholas. Mrs Hanham, however, is under- stood to have been active behind the scenes in the cause of Scott Must Go. Most of the other borough councillors agreed with her, partly because they shared the centrist view that Sir Nicholas Scott had become a liability but also — and here local politics intruded again — because many of them would move up in the coun- cil pecking order if Mrs Hanham became an MP and gave up the leadership.

On Monday, before the meeting on Sir Nicholas, the council's Tory group held its own regular meeting. Sir Nicholas was not on the agenda, but the councilors' being together gave them a chance to concert action. This was ominous for Sir Nicholas. Ominous for him too was that several gen- erous local donors to the Party had written to the association warning that they would be less generous if Sir Nicholas were rese- lected. These included Sir Patrick Sheehy, chairman of British-American Tobacco Industries (BAT), and Mr Adrian Berry, science writer for the Daily Telegraph and son of the paper's former proprietor, Lord Hartwell.

But it did not look ominous for Sir Nicholas as Monday night's meeting got under way. He and his wife mounted the platform to tumultuous applause and cheering. The Scott camp was to make much more noise than the antis through- out the evening — drowning out the silent majority who held the votes. Two of his most voiciferous supporters were Keith Best, who had to resign as an MP in 1987 for making multiple BT share applications, and his wife, Liz Gibson, prospective Con- servative parliamentary candidate against Glenda Jackson in Hampstead.

The meeting was held in the unlovely glass and concrete building which is the town hall of the Royal Borough of Kens- ington and Chelsea. All of the eligible 3,000 or so members of the Conservative Association of the newly merged con- stituency of Kensington and Chelsea — whose candidate Sir Nicholas was — would have been allowed to attend. Just under 1,000 members did so. It was a gath- ering of the largest, richest and most aris- tocratic of Conservative associations.

They crammed in from 6.15 until doors closed at 7.15. 'Security' was why it took that long. Conservative constituency agents from the Greater London area, supervised by John Earl, the bespectacled, dark-haired bureaucrat who works at Con- servative Central Office as agent for the capital, checked credentials. Condition of entry was the notice of the meeting, sent to all eligible association members. Still, at least two journalists were resourceful enough to get in: Simon Sebag Monte- fibre, on behalf the Sunday Times, and the Independent's Clare Garner who joined the Party specially in order to attend.

The atmosphere was tense — but also 'social'. As the meeting settled down, a female voice was heard to observe: 'Half of Hurlingham is here.' (Hurlingham is the sports club by the Thames in Fulham, much frequented by central London's haute bourgeoisie.) Meanwhile, in the over- flow hall, one grande dame anxiously asked of another: 'Where's the Countess of Lis- towel?' Lady Carrington was there, wife of Peter. She was believed to have voted against Sir Nicholas.

The meeting was presided over by the association president, Sir Michael Craig- Cooper; former army officer and a classic Tory gentleman of the old school: clubs — The Beefsteak, Pratt's, White's; hobby in Who's Who — 'admiring wife's gardening'. Privately, he had long harboured doubts about Sir Nicholas but he conducted the proceedings with impeccable fairness. Local politics ruled before anything else. Sir Michael asked everyone to stand in silence for 30 seconds in memory of a recently deceased Kensington Tory emi- nence, Sir Dennis Titchener-Barrett.

Next came Sir Nicholas. He spoke for six minutes. He looked more confident than when he failed to win the support of the constituency executive a few weeks before. Unlike then, his hands did not shake. He confined himself to his medical condition during the fateful two days in Bournemouth when he slept through his own reception for constituency representa- tives and the next night ended up face- down on the pavement after the Irish embassy party. He held up a letter from his consultant at Chelsea and Westminster Hospital which he said substantiated his claim that it was painkillers for his bad back which twice knocked him out, not drink. He invited anyone to read it. Glanc- ing at his wife, he said she had recommend- ed that he should not got to Bournemouth, but he had been determined to attend his own reception.

Then he took questions. They were all of a pharmaceutical nature. Elizabeth Arm- strong, a doctor, found it 'alarming and unusual' that strong painkillers had been prescribed without a warning on the label about the effect of mixing them with alco- hol. Sir Nicholas agreed: 'With hindsight, that would have been valuable.' He answered the questions like a well-briefed minister.

Simon Allison, a fellow left-wing Tory and a pillar of the Conservative Group for Europe, proposed the motion accepting Sir Nicholas's explanation of the events 'which caused him to be featured in the national media'. The wording irritated anti-Scottites. They thought it played on anti-media feeling. In the event, Sir Nicholas's supporters harped less than before on him as media victim. Mr Allison, for example, placed most emphasis on party unity in the face of a newly-united Labour Party. By deselecting Sir Nicholas, the Tories would be indulging in the kind of divisiveness which had kept Labour out of office for so long.

Opposing the motion was Michael Con- stantinidi, chairman of the constituency's Patrons' Club of people rich enough to give four-figure sums to the association. Meetings of the main anti-Scott group, Scotch (Search for a Candidate of Tem- perate Character and Habits), had taken place in Mr Constantinidi's home in Car- lyle Square. He had voted for Sir Nicholas when last he had been in difficulties with the association after the car incident in the Chelsea street. This was not a left-right split, he said. Nor was it geographical — Kensington against Chelsea. 'This matter has set north against south, east against west, friend against friend, husband against husband.' The hall giggled. 'Er, wife, I mean,' he added.

The meeting was then thrown open to the floor: two minutes for each speaker, rigorously enforced by Sir Michael Craig- Cooper. It was generally agreed that the pro-Scott speeches were better than the anti-Scott ones — except for one in which the speaker defended the MP by pointing out that Winston Churchill also drank. (Sir Michael commented: 'I think that was a speech in favour of the motion.') But at least one anti-Scott speech was effective: that of Barry Phelps, councillor for Earl's Court and maverick — the sort of independent-minded character who might be assumed to be a Eurosceptic but who is in fact a Euro-enthusiast, which made his intervention all the more damaging to Sir Nicholas. His view was that the party could no longer unite behind so troublesome a figure. He had a devastating question about any suggestion that the press had lied about Sir Nicholas's drinking: 'Why didn't he sue?' After the meeting, Mr Phelps was spat at by a Scott supporter.

A speaker who identified himself as Lord Valentine Cecil, which he pronounced `Sis- set', added that he was the brother of Lord Cranbome, leader of the Lords, and there- for knew about loyalty. 'But', Lord Valen- tine, an expensively suited ex-Guards officer who always wears a white carnation in his buttonhole, continued, 'there are times to consider loyalty to the association. How can you form a working relationship with your executive committee when it has already rejected you?'

Merrick Cockell's summing up against Sir Nicholas was also thought especially damaging to the MP. He said it was not the media which had caused the street accident last year. Mr Cockell appealed to Tory Realpolitik. 'We're a ruthless party,' he said. No matter how much service has been given, there are times when you have to go. Lady Thatcher had won 57 per cent of the vote against Mr Heseltine, but she still went. Yet Sir Nicholas, defeated at the executive meeting, persisted in clinging on.

Sir Nicholas had the last word. He emphasised his experience. But it was the association's recent experience of him which defeated him by 509 votes to 439 (with ten spoilt papers). Then Mrs Han- ,ham presided over a discreet drinks party in her office. She is annoyed at reports that they consumed champagne. That would have been too celebratory. It was only sparkling wine.

'Good Lord! Are the holidays upon us already?'