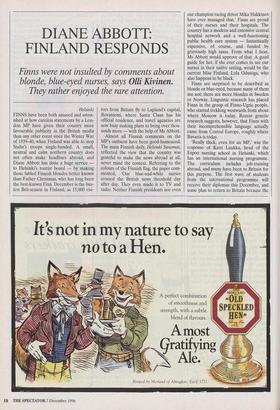 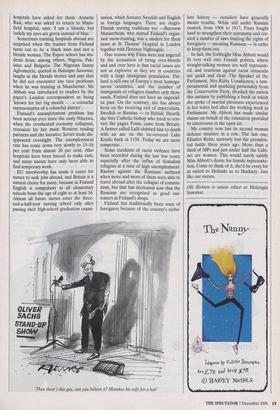 Finns were not insulted by comments about

They rather enjoyed the rare attention.

Helsinki FINNS have been both amused and aston- ished at how careless statements by a Lon- don MP have given their country more favourable publicity in the British media than any other event since the Winter War of 1939-40, when Finland was able to stop Stalin's troops single-handed. A small, neutral and calm northern country does not often make headlines abroad, and Diane Abbott has done a huge service — to Helsinki's tourist board — by making those fabled Finnish blondes better known than Father Christmas, who has long been the best-known Finn. December is the bus- iest Brit-season in Finland, as 15,000 visi- tors from Britain fly to Lapland's capital, Rovaniemi, where Santa Claus has his official residence, and travel agencies are now busy making plans to bring over thou- sands more — with the help of Ms Abbott.

Almost all Finnish comments on the MP's outburst have been good-humoured. The main Finnish daily, Helsinki Sanomat, reflected the view that the country was grateful to make the news abroad at all, never mind the context. Referring to the colours of the Finnish flag, the paper com- mented, 'Our blue-and-white nurses crossed the British news threshold day after day. They even made it to TV and radio. Neither Finnish presidents nor even our champion racing driver Mika Hakkinen have ever managed that.' Finns are proud of their nurses and their hospitals. The country has a modern and extensive central hospital network and a well-functioning public health care system — fantastically expensive, of course, and funded by grievously high taxes. From what I hear, Ms Abbott would approve of that. A good guide for her, if she ever comes to see our nurses in their native setting, would be the current Miss Finland, Lola Odusoga, who also happens to be black.

Finns are surprised to be described as blonde or blue-eyed, because many of them are not; there are more blondes in Sweden or Norway. Linguistic research has placed Finns in the group of Finno-Ugric people, who started trekking westwards from about where Moscow is today. Recent genetic research suggests, however, that Finns with their incomprehensible language actually came from Central Europe, roughly where Bavaria is today.

'Really thick, even for an MP,' was the response of Katri Luukka, head of the Espoo nursing school in Helsinki, which has an international nursing programme. The curriculum includes job-training abroad, and many have been to Britain for this purpose. The first wave of students from the international programme will receive their diplomas this December, and some plan to return to Britain because the hospitals have asked for them: Annette Rasi, who was asked to return to Mans- field hospital, says, 'I am a blonde, but luckily my eyes are green instead of blue.'

Sometimes training hospitals abroad are surprised when the trainee from Finland turns out to be a black man and not a blonde woman. The Espoo school has stu- dents from, among others, Nigeria, Pak- istan and Bulgaria. The Nigerian Sunny Agbomeirle, quoted in Helsingin Sanomat, laughs at the blonde stories and says that he did not encounter any race problems when he was training in Manchester. Ms Abbott was introduced to readers by the paper's London correspondent as being 'known for her big mouth . . a colourful representative of a colourful district'.

Finland's unemployment problem has been serious ever since the early Nineties, when the overheated economy collapsed, recession hit her main Western trading partners and the lucrative Soviet trade dis- appeared overnight. The unemployment rate has come down very slowly to 15-16 per cent from almost 20 per cent. Also hospitals have been forced to make cuts, and many nurses have only been able to find temporary work.

EU membership has made it easier for nurses to seek jobs abroad, and Britain is a natural choice for many, because in Finland English is compulsory at all elementary schools from the age of eight to at least 16. Almost all future nurses enter the three- and-a-half-year nursing school only after passing their high-school graduation exami-

nation, which features Swedish and English as foreign languages. There are Anglo- Finnish nursing traditions too —Baroness Mannerheim, who started Finland's organ- ised nurse-training, was a student for three years at St Thomas' Hospital in London together with Florence Nightingale.

One reason why Finns were not angered by the accusation of being over-blonde and and over here is that racial issues are not as explosive as they are in countries with a large immigrant population. Fin- land is still one of Europe's most homoge- neous countries, and the number of immigrants or refugees number only thou- sands. Finland does not have an imperial- ist past. On the contrary, she has always been on the receiving end of imperialism, Swedish or Russian — or British: Henrik, the first Catholic bishop who tried to con- vert the pagan Finns, came from Britain. A farmer called Lalli clubbed him to death with an axe on the ice-covered Lake Koylio back in 1156. Today we are more temperate.

Some incidents of racist violence have been recorded during the last few years, especially after the influx of Somalian refugees at a time of high unemployment. Racism against the Russians surfaced when more and more of them were able to travel abroad after the collapse of commu- nism, but that has decreased now that the Russians are recognised as good cus- tomers in Finland's shops.

Finland has traditionally been wary of foreigners because of the country's turbu- 'Then there's this guy, can you believe it? Mistakes his wife for a hat!' lent history — outsiders have generally meant trouble. While still under Russian control, from 1908 to 1917, Finns fought hard to strengthen their autonomy and cre- ated a number of laws limiting the rights of foreigners — meaning Russians — in order to keep them out.

In fact, the forthright Miss Abbott would fit very well into Finnish politics, where straight-talking women are well represent- ed, and reactions against racist innuendo are quick and clear. The Speaker of the Parliament, Mrs Riitta Uosukainen, a tem- peramental and sparkling personality from the Conservative Party, shocked the nation this autumn by publishing a book in which she spoke of marital pleasures experienced in her water bed after the working week in Parliament. Ms Abbott has made similar claims on behalf of the relaxation provided by intercourse in the open air.

My country now has its second woman defence minister in a row. The last one, Elisabet Rehn, narrowly lost the presiden- tial battle three years ago. More than a third of MPs and just under half the Cabi- net are women. This would surely satisfy Miss Abbott's desire for female representa- tion. Come to think of it, she'd be every bit as suited to Helsinki as to Hackney. Just like our nurses.